A short trip out with a friend Chris E over to the Wirral.... Inner Marsh Farm to be precise. We set off with two target birds in mind, Black Tern and Little Stint. They both obliged very early on, although the Tern was always quite distant. The Little Stint however were an incredible 6 Little Stint, which became 8 later in the day... long after we had left..

The main hide pool was very busy with countless species all showing very well. Some of the highlights were a single Curlew Sandpiper that seems to be staying as I think this is its 4th week, 10 stunning Golden Plover that had dropped in overnight , 4 handsome Spotted Redshank, and an incridible 25+ Snipe all in open view, (these are normally a very shy and reclusive bird often hidden from view), 5 Ruff of which one caused a little confussion (it turned out to be a smaller juvenile female Ruff) and a single Water Rail that wandered out in front of the hide, again a very reclusive and shy bird.

Unfortunatly Inner Marsh Farm currently has only the one hide and when anything of note drops in (Black Tern, Little Stint, Spotted Redshank etc...) it does get busy. We probably timed the visit well by going early morning and getting a few hours in before it got too busy. On the way out of the reserve it was nice to at least hear 2 Goldcrests amongst the many woodland species. Unusually no raptors were seen this morning. 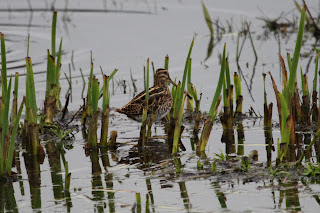