The European Stonechat (Saxicola rubicola) is a small passerine 11.5–13 cm long and genetic evidence has placed it and its relatives in the Old World flycatcher family Muscicapidae.

The summer male has black upperparts, a black head, an orange throat and breast, and a white belly and vent. It also has white half-collar on the sides of its neck, a small white scapular patch on the wings, and a very small white patch on the rump often streaked with black. The female has brown upperparts and head, and no white neck patches, rump or belly, these areas being streaked dark brown on paler brown, the only white being the scapular patch on the wings and even this often being buffy-white. Birds are frequently seen flicking their wings while perched, often doing so on the tops of low bushes. As its name suggests, birds utter a sharp loud call that sound like two stones being tapped together.

They breed on heath, moors, grassland, and wasteland that have some dense shrubs, such as gorse, in which it can build a nest.

Stonechats are primarily insectivorous, feeding on caterpillars, moths, ants, spiders and flies, though they will also take worms and snails, and feed on seeds and berries in the autumn and winter.

The following image is of the male that holds territory close to a busy road high up on the peak district upper moorlands. 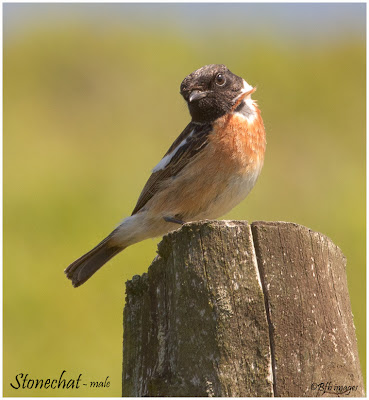 2010 male in the same area but on the otherside  of the road - is it me or do wire fences make great perches for images! 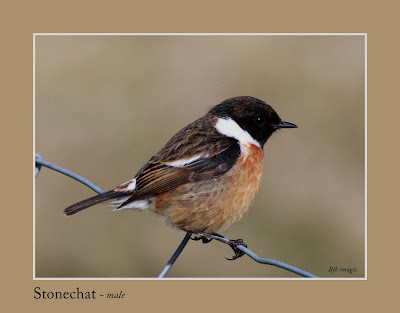 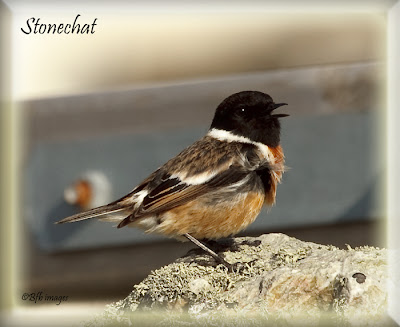 The following image is of the female that holds territory close to a busy road high up on the peak district upper moorlands. 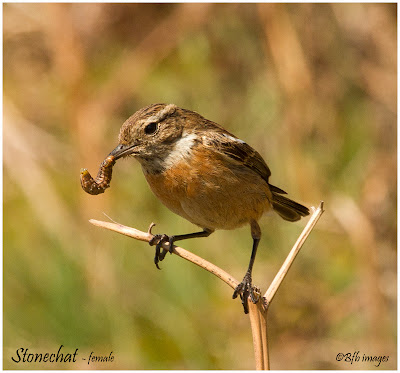 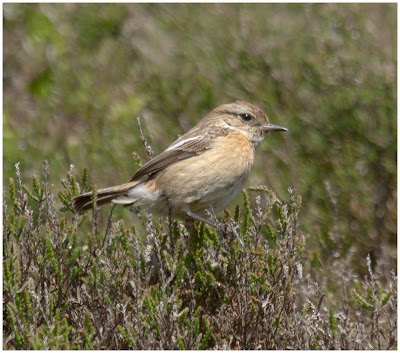 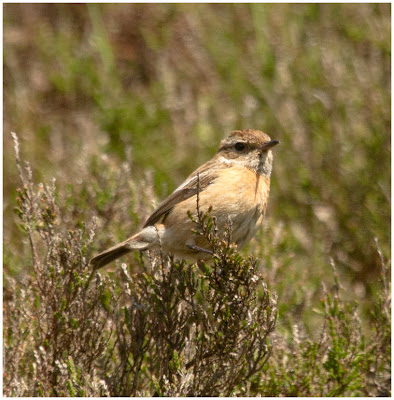 I have to drive 30 minutes or so to see this species as I dont have enough of the right habitat locally but its always worth for a fine species such as this
Posted by Dave at 13:43

Email ThisBlogThis!Share to TwitterShare to FacebookShare to Pinterest
Labels: Stonechat

I love the way the stonechat constantly flicks open it's tail up and down , as it watches for insect prey perched up.Nice captures.Have a great day!

Fabulous shots - I do agree that wires make perfect perches!

Some great shots there Dave - particularly like the female with the caterpillar. Some meal for a little bird that.

The Stonechat is a a pretty bird, i love the coloring. Great shots.

Excellent bird -- and how well they both posed for you. (I think you are so lucky to find it unusual to have to drive 30 minutes to find birds)...if I could see as many as you can without doing at least that I'd think I was in heaven). I'm so glad you drove for this one -- it certainly was worth it!

Wonderful shots! I love your capture of the female stonechat with the meal in its mouth.

Love Stonechats and you've got some great shots of them Dave.

Fantastic shots Dave. I'm crazy about good bokeh and your shots have it in spades. Brilliantly captured scenes!
Cheers!

Hi there - that a great set of images. I have not seen one of these in a while - last time was on the Mendips in Somerset about 5 years ago!

My bird is a Raven - all of the corvids in the south of Australia are Ravens - but there are three species - Australian, Little and Forest. And they really are hard to tell apart - the falling branch would have helped!

PS: feel free to keep coming back - its good for the stats! You may also find my "other blog" of interest - there is a link on my "photo" blog.

I like the slide show display, a very nice feature! Great images and informative narrative.

lucky you that you were able to see them after the 30 minute drive.

i am so lucky to have so many cool visitors, that i see, right from the comfort of my chair!!

thanks for stopping by and leaving you kind comment!!

Wonderful shots! I also saw the other post with the photos of the Mandarin... Stunning photos of this beautifu bird!
Ps. I like your header very much!
Have a nice evening:)

They are charming, and I love your photos!

This is such a handsome little bird. I love that you've shown us so many photos of it,