A little logistical preparation for a few birds that were over on the east coast. Also calculating a slight detour to visit a reserve that would be new to me and hopefully also a new bird.

The main focus would be on the Spurn birds, especially as news was out of a few species that would interest me. Common Rosefinch, Red Backed Shrike, Wryneck and Tawny Pipit, with Pectoral Sandpipers in Nottingham on the way back........

A very early start for my trip to Spurn, good progress got me there at 07.00hrs. Here is where some things started to go  a little wrong. I found myself making a choice between initially going it alone and speaking to other birders in the area of what's about, looking at the sightings boards in the Visitor centre or joining (at a cost) a day package of ranger walks and talks.......I took the latter option. While the small group waited for me to park up and get prepared  news was filtering of an early sighting of Common Rosefinch, by the time we had set off on our walk it came across that it was actually back where we had started the walk..... I ummed and arred and decided to continue the walk as "it would be there when we get back.... wouldn't it" The walk was splendid, lovely views, good weather (not for scarce birds dropping in though) and we were seeing some lovely species, in the back of my mind I was thinking should have I done the sensible thing and gone for the Common Rosefinch, the walk continued.

No problems though, news through that the Red Backed Shrike is in our direction ..... scope views soon ensued, not a life bird but a new UK bird and species No 230. Three hours later I left the group and immediately headed off for better and closer views of the Shrike.... a little belter! 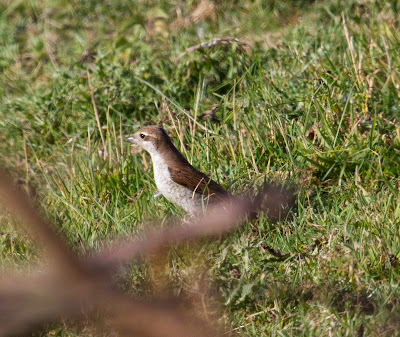 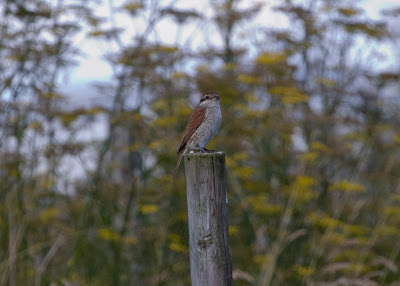 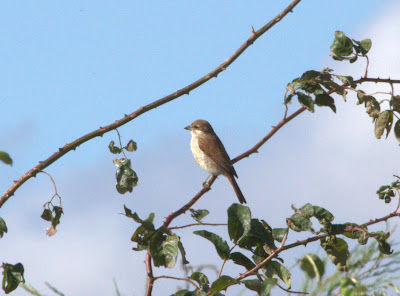 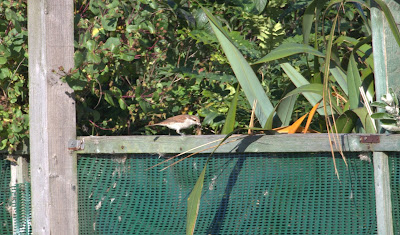 Again I got news of a further sighting of the Common Rosefinch, I was nowhere near my car and it was a hell of a walk, another birder offered to drive me. He dropped me off and I searched the area, another birder joined, no luck! Wheatear, Whinchat, Juvenile Kestrel, Curlew Sandpiper were all nice but we could not locate the most wanted. As the day progressed negative news filtered though...... I don't think it was picked up again. How costly was it by not going with my instincts and turning round when I had the chance, did I stay too long with the Red Backed Shrike????? ifs and buts.
A little sea watching and taking on board the long first flight this juvenile Swallow is about to embark on for the first time brought me to the time to leave Spurn for Nottingham's stop.
Swallows, Adult feeding the youngster 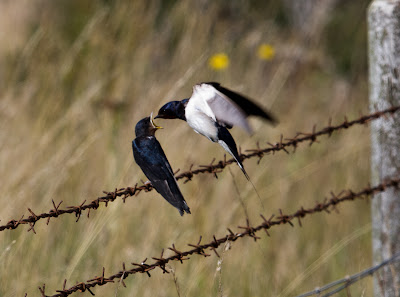 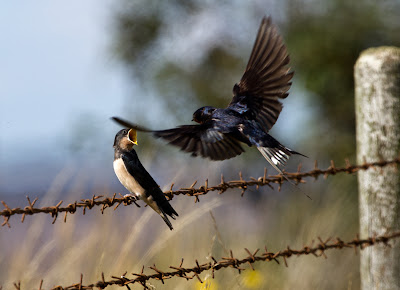 Blimey this took some finding - Idle Valley Reserve, Nottingham. Its vast! it has a few entrances, of course I would find the wrong one. I rang a pal who googled me out of trouble and eventually I am in the right location...... arnt I?
A couple were already in the area and looking for the correct wader scrape, we split up and agreed to share the news with each other if we dropped onto the birds.
20 minutes later and bingo I got my #1045 life species and #231 UK species
a pair of Pectoral Sandpipers.
Mega distant on the far far far-off shoreline (Left and right of the image) 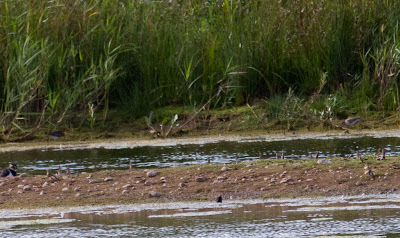 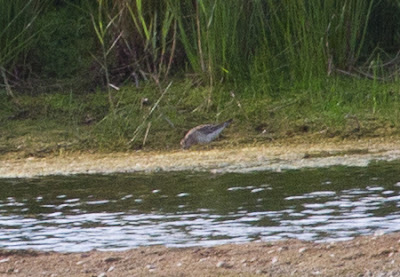 ﻿
Yes they were distant, who cares, they showed well in the scope and it was a lovely end to the day, throw in a Hobby just before I left. 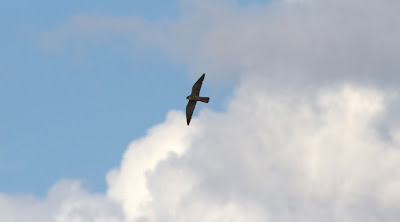 I relocated the couple who were also searching and put them onto the Sandpipers also.
Posted by Dave at 19:20

The day for you may have been a bit cumbersome, but oh the reward for being diligent!!!

Looks like an overall great day of birding!
Congratulations on the new (and the sort of new) birds!

Well, it was a partial success and a great day for a walk. I too have often found that looking for a specific bird is less likely to turn it up than just letting it appear when you are looking for something else.

HI Overall a great day's birding. One never knows what we will find on an outing or even in our back yeads