The Cebu leg of the trip was always going to be a whistle stop tour. When building the itinerary we discussed weather to keep this leg or not, the Cebu Flowerpecker was a slim chance at very best, and with a limited number of other species likely to be seen in the time allowed. We decided that we would go for it mainly in the hope of being in a privileged set of people who get to see the incredibly rare (possibly extinct?) Cebu Flowerpecker, and as stated there are a few other birds that make the journey worth while so the island got the thumbs up and we cemented it into the itinerary.

A short flight from Mindanao to Cebu and we were picked up for a single nights stay. Somewhere in translation our arrangements got lost and we missed an important opportunity to try to see the endemic Cebu Hawk-Owl. A very early pick up didn't happen as our driver, our guide and ourselves all had differing meet times! even the meet time that our driver was given was missed as he turned up 30 minutes late. Anyway we did arrive at our guides house and met Oking. This is probably one of the few locations of the trip where the typhoon damage showed, swathes of trees were felled or incredibly bare of branches and leaves . We set off now in daylight just in time to see a Barred Rail strut across his land while a stunning Magnificent Sunbird was the first bird on the trail. Brown Shrike and the Cebu race of the Elegant Tit visayanus. One of the birds high on our Philippines trip list was the Black Sharma, another endemic to the island of Cebu. While walking I had noticed what could only be a Black Sharma fly into a patch of forest, but would never have been able to get any features to make the sighting worthwhile. But only a few minutes later we would be watching a small clearing while a Black Sharma (or possibly 2) displayed well with eyelevel flypasts and the occasional stop and perch up. Try as I might I  never managed an image so this one is one that Jeff managed. 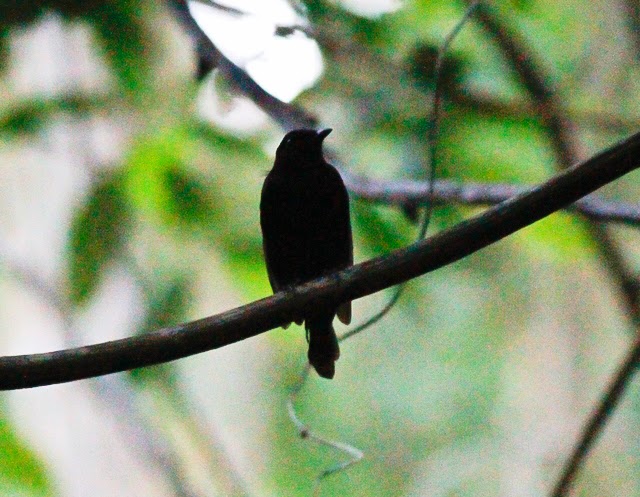 Almost immediately we got an added bonus with a bird we Missed in Malaysia 3 years ago when a Mangrove Blue Flycatcher flew into the clearing. 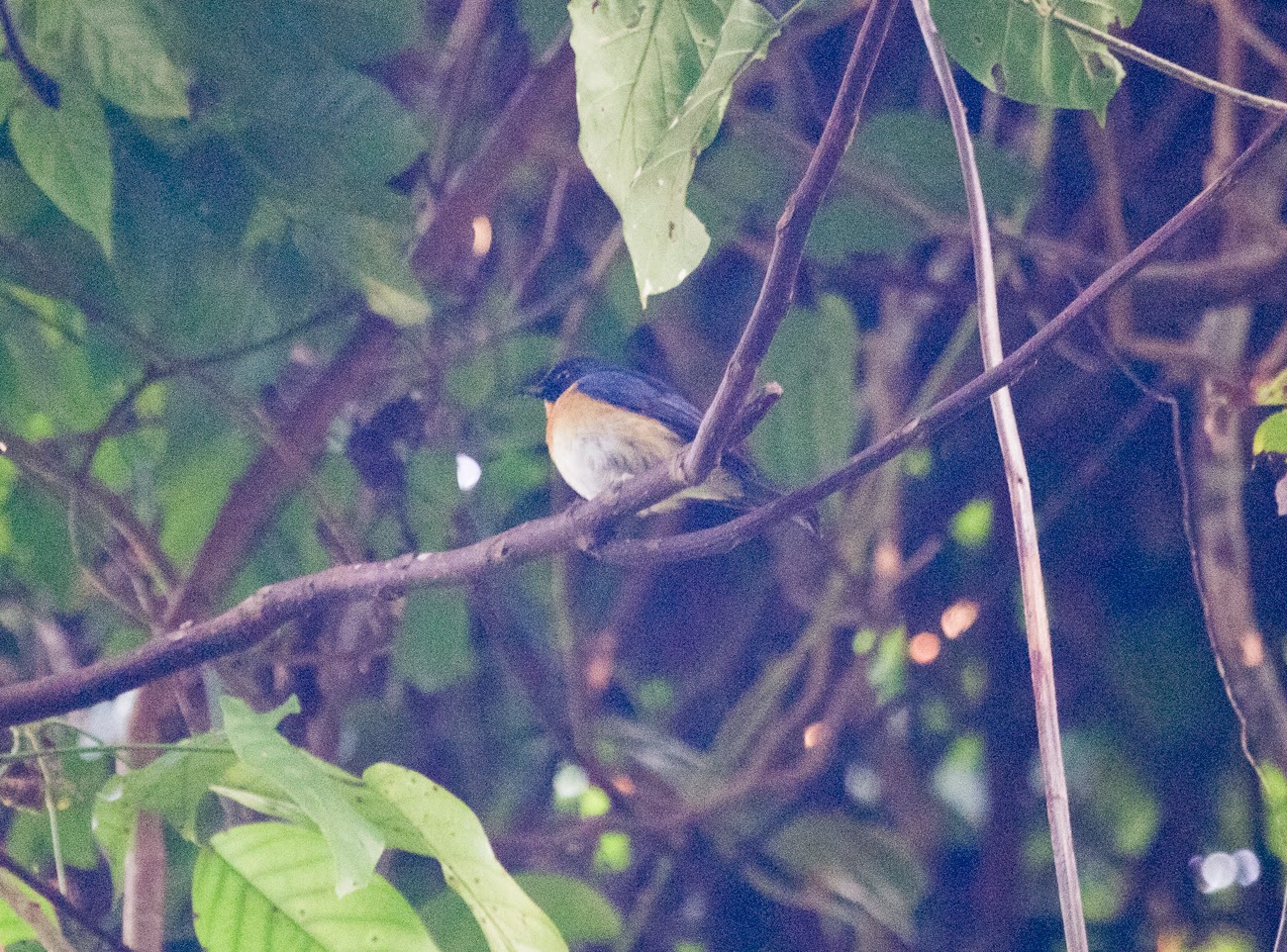 We needed to climb to the lookout platform while along the way we got a quick glimpse of a cuckoo which our guide Oking called as Brush Cuckoo, which I still don't know if it is different to this

Rusty Breasted Cuckoo which we saw later on in the day. 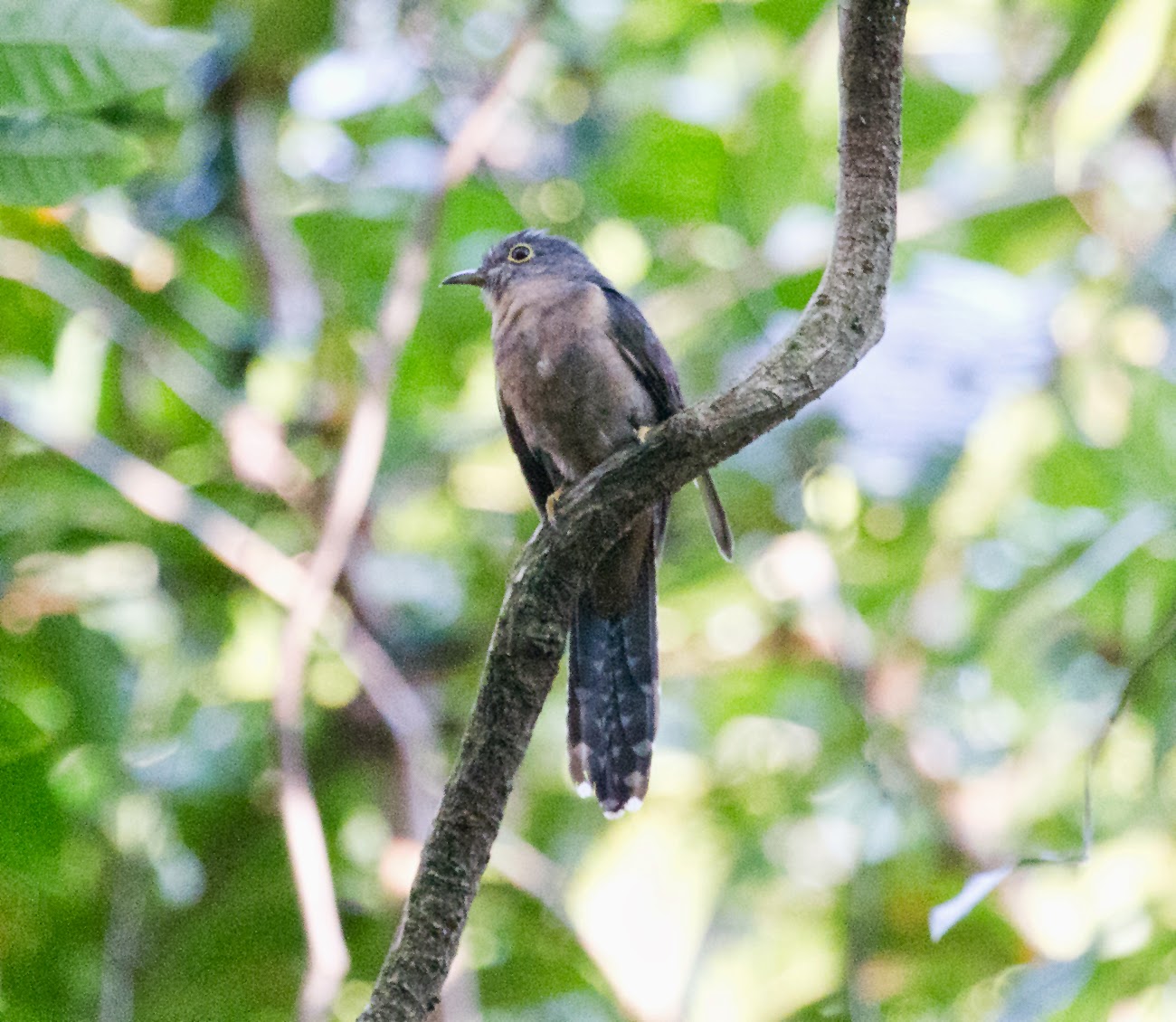 We climbed to the amazing lookout tower built by our Oking. This overlooks a tree that has been the favoured feeding tree of the Cebu Flowerpecker.  The Cebu Flowerpecker is a critically endangered bird that was feared to have become extinct early in the 20th century after the clearance of most of the island's forests, but it was rediscovered in 1992 in a small patch of this forest that now is a holy grail for bird watchers. During the Typhoon some of the surrounding trees had been destroyed so Oking has to now revaluate this situation. He hadn't heard or seen the bird since the Typhoon and had only heard the bird once in the last year, sightings are rare, some say even misidentified by visitors so the information is all too unclear at the moment, Oking even thinks that as few as 6 birds are left at the most, who knows. Of course it would have been an amazing bit of luck for us to see the Cebu Fowerpecker but we tried for three or four hours...... unsurprisingly without any luck.
I did get onto a Philippine hawk-cuckoo flying over the platform which was a nice bonus and both Jeff and I got the Streak Breasted Bulbul (Ixos siquijorensis monticola) which is endemic to this island and is another critically endangered bird.
Overall the whistle stop tour was well worth the flight and ferry journey as we picked up a few island specialities, a bird that may not be with us for much longer and a few life birds that we didn't see anywhere else, of course we got the Black Sharma which was realistically the #1 priority.
We catch the ferry to Bohol.
Posted by Dave at 22:56