After a comfortable night in Bogota , Jose, Jeff and myself  spent most of the day travelling to Mitu. Mitu is the capital town of the Vaupes department in South East Colombia and is in the heart of the Amazon Basin. This region contains a distinctively different topography and vegetation to most of what we regard as "the Amazon", and therefore the avifauna is different, it is mostly lowland forest, white-sand scrub and savannah.

The flight over the Amazon was incredible, seeing wide rivers and small channels weaving their way through the mile after mile of forest with only now and again a small hill rising above the trees. Even less frequent were areas of population, theset stuck out as square patches of farmed land.... these were few and far between. We arrived at the quaint Mitu Airport.

I am sure it was just a 2 man operation as we were made to waited eagerly to collect our bags, I got my first two Amazonia birds.... a little disappointingly they were Grey Breasted Martins and a few Blue Grey Tanagers. 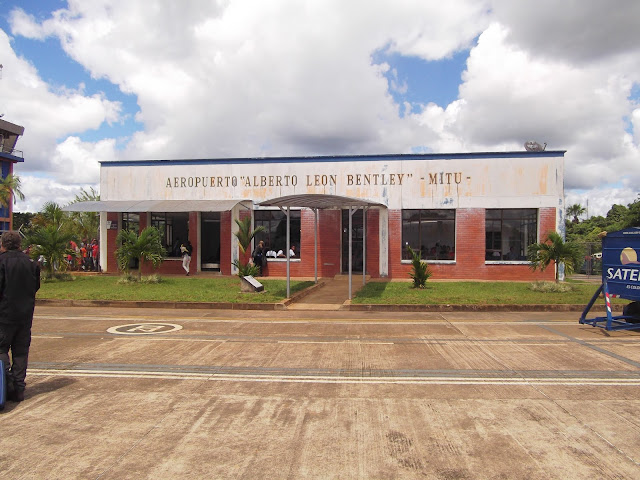 Outside the airport  we were met by Jorge. Jorge turned out to be the best Mr Fix it you could imagine. He is the Amazon based contact that organises the hotels, food, guides, transport, Coffee in the morning at ridiculously early hours, etc etc... Great Man.

After a very large and late lunch which compromised 3 courses we met our guide for the afternoon, Agrapino. Jeff, Jose (who needed to be with us to translate as English isn't spoken by the local guides), Agrapino and myself climbed into the jeep with our driver Wilson. We were going to take it easy with just a short trip to the Urania bridge area only 10 minutes from town.
Urania Bridge 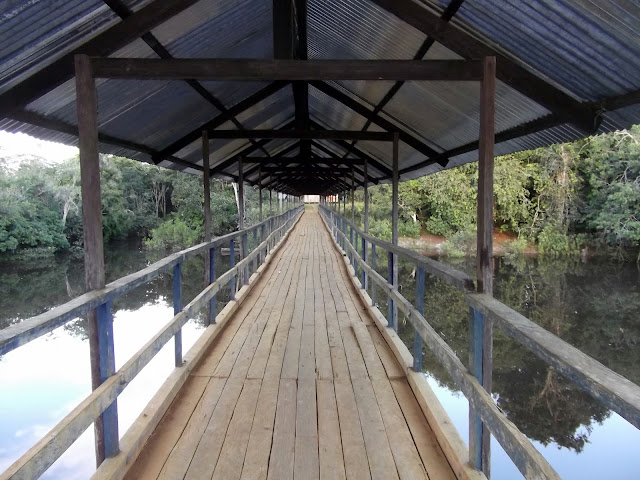 We started with some easy stuff, more Grey Breasted Martins, Yellow Rumped Cacique and more Blue grey Tanagers before I picked up my first lifers of the area, White Vented Euphonia, Bronzy Jacamar and Black Caracara.
My best views to date of Orange Cheeked Parakeets while another lifer showed really easily when we got onto a pair of Black Chinned Antbirds. In the same wooded area right next to the bridge Golden Headed Manakin, Yellow Bellied Dacnis.... my first ever species of this family of birds, Cobalt Winged Parakeets, Lettered Aracari, Cherries Antwren, while overhead flew 2 Scarlet Macaws, Short tailed Swifts and Fork tailed Palm swifts. All this in an area about the size of a postage stamp! Seriously we had stopped the jeep at the bridge and hadn't even got onto the bridge.
Orange Cheeked Parrot 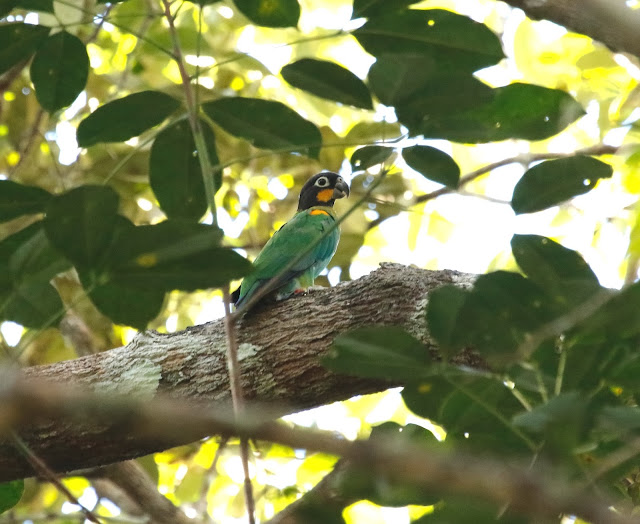 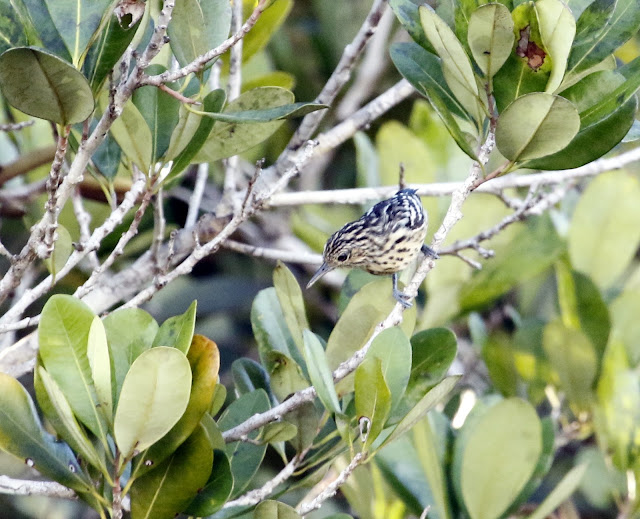 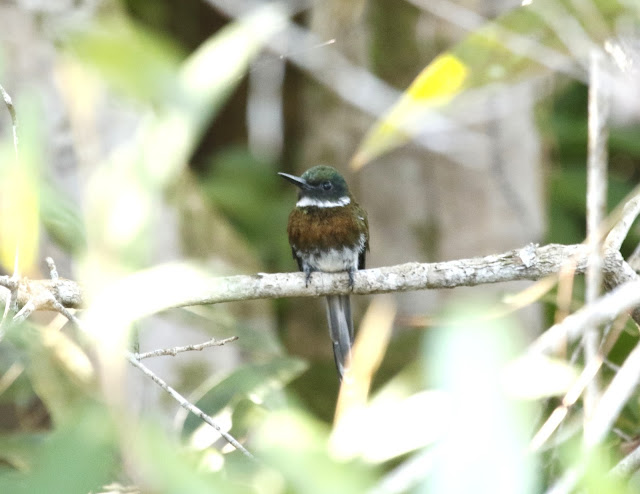 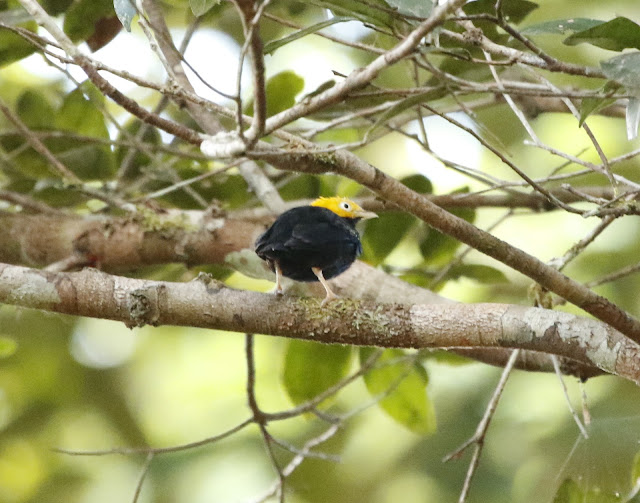 From the bridge we picked up more lovely Cherries Antwrens while my first ever Green Ibis sat high up in a tree and the now ever reliable Spotted Sandpiper. The three hundred meter walk back from the bridge gave is a small mixed flock of Tanagers, Palm, Flame Crested, Silver Beaked as well as the areas default bird... Swallow-winged Puffbirds and a Helmeted Pygmy-Tyrant.
As the sun started to set, a Plumbeous Kite, Lineated and Yellow Tufted Woodpeckers shared the same tree, as and what turned out to be our only trip sighting of a Fork-tailed Flycatcher made this very short walk very productive.

The highlight bird of the afternoon however were 2 Red Fan Parrott's that came close into a tree above us, not the best views but good enough to see a stunning bird and a nice end to out first afternoon in the Amazon. As we settled down for dinner the heavens opened Amazonian style, the towns roads flooded very quickly and my thoughts wandered to a very muddy walk through the forest in the morning.... we retired to bed as the torrential rain continued.
Red Fan Parrot 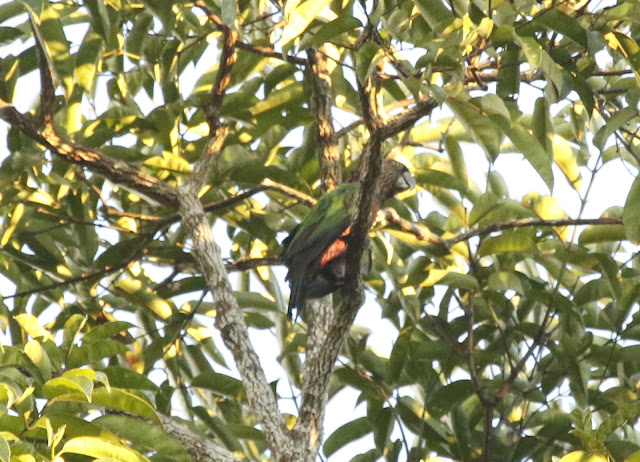 ﻿
Next day Jorge brought us some much needed coffee before we set off early as we headed off to the MCH Santa Cruz road. After the nights heavy rain I feared for a muddy day as I turned out it wasn't too bad although a few Spotted Sandpipers found enough large track puddles to keep happy. A little bad news when one of our local guides failed to show up at the meeting point at Peublo Neuvo, so Jeff, Myself, Jose and Agrapino who had guided us on the first afternoon in the Amazon drove to a bridge about 30 minutes from Pueblo Nuevo. We got out when we heard a Coroya Wren calling, unfortunately we weren't able to get onto it (we did later), unfortunately we still had early morning gloom as this Channel Billed Toucan sat in the open and allowed a record shot. 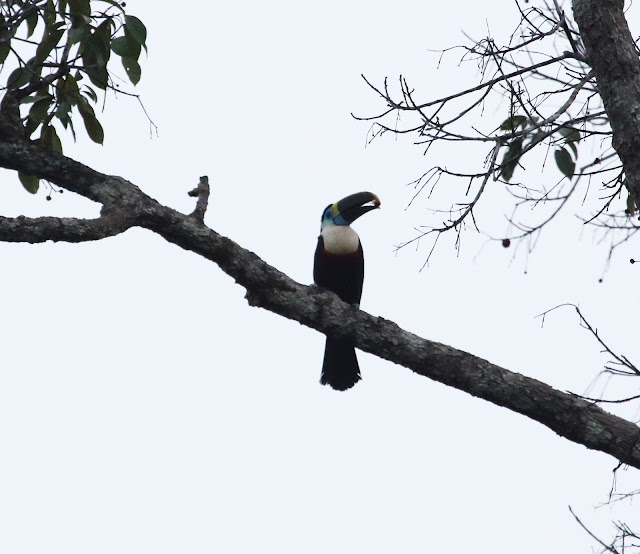 Yellow browed Sparrows, numerous Rusty Margined Flycatchers and a single Short Crested Flycatcher was a new species. We then had great views of a pair of Dusky Antbirds in the undergrowth while the Lovely Reddish Hermits buzzed around any flowering bushes that were available. It was busy with numerous species in the early hours, more of the regular Silver beaked Tanagers, Swallow Tanagers, Yellow Tufted Woodpeckers and the odd Squirrel Cuckoo, but we were picking up more new birds too with Epaulet Oriole, Fork Tailed Woodnympth (this species turned out to be the default hummer in the area) and White Chinned Sapphire.

As we pulled over for breakfast Agrapino got us onto one of our trip targets (or maybe Agrapino told Wilson to pull over because he heard it....) . A male Fiery Topaz was feeding on a flowering bush about 40 mtrs away, unfortunately we couldn't get any nearer due to thick vegetation but it gave great views even though the light had become subdued due to the imminent rain. We had parked close to a flowering tree of the same species that it was feeding on and we hoped it would fly over the feed closer to us, alas it didn't.... but we got the bird and I got an image just before it wheeled away not to be seen again. 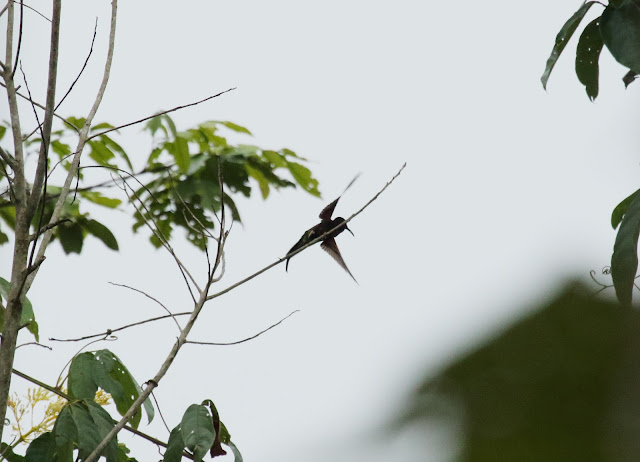 We then went on a bit of an Antbird fest when we quickly picked up, and with good views of Imeri Warbling Antbird, Mouse Coloured Antshrike, Black Faced Antbird and Spot Backed Antbird. We didn't get it all our own way though as we tried hard for a Black Bushbird that called and came close and even closer and for the second time this trip the bird failed to show..... logged as a heard only for this one I am afraid as was a Black Throated Antbird and Black Headed Antbird (although these would be seen later on).

It wasn't all about the skulkers, Goulds Jewelfront was a lovely find, White fronted Nunbirds, Blue Crowned Trogan male, Plumbeous Kite, Plumbeous Pigeon and Green and Olive Oropendolas. A small mixed flock of Slender Billed Xenops, Wedge Billed Woodcreeper, Dwarf-Tyrant Manakin and Amazonian Banded Woodcreepers were the last before the heavens opened and sent us to the village to take shelter. It wasn't all bad as we were still able to bird from the cover of the village hall (straw covered tepee type building that doubles as a meeting place and breakfasts for the villagers on a Saturday apparently). Here we were able to pick out a fabulous Spangled Cotinga, a small group of the smart Magpie Tanagers and 2 large flocks of Bobolink. 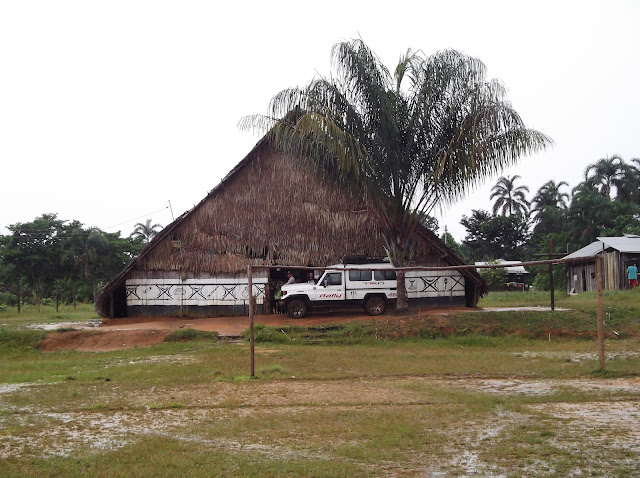 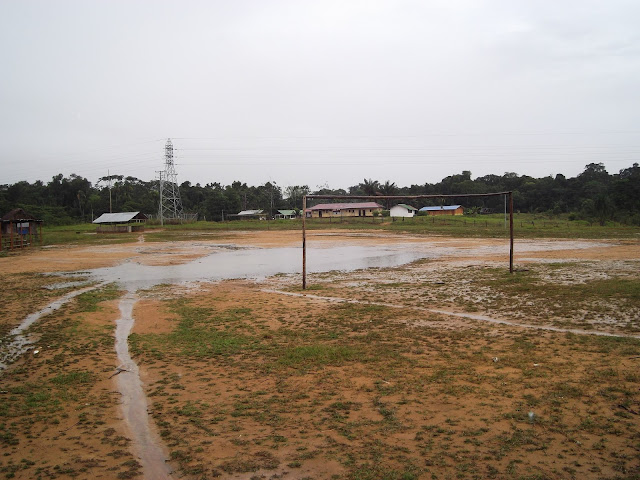 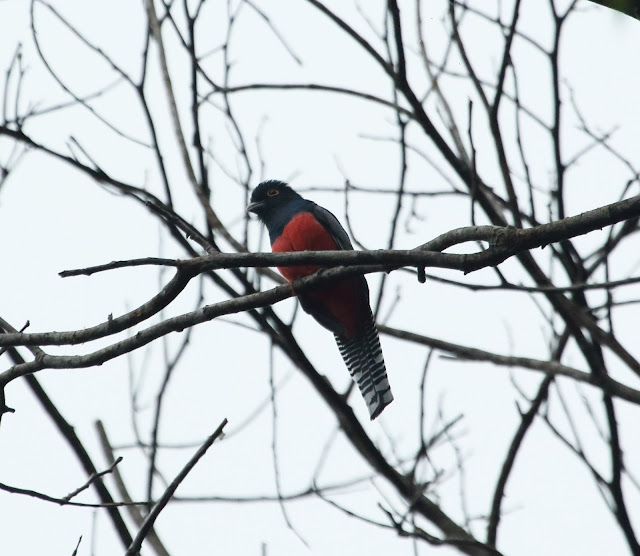 The guide the should have joined us in the morning must have predicted the rain as he appeared just as the rain disappeared...... So with Lorenzo now leading the way, off we went in search of more birds. He found a small clearing of disturbed forest where we had two species of Woodpecker in one tree, Yellow Tufted Woodpecker and Lineated Woodpecker and 2 juveniles peering out of a nest hole and a Little Woodpecker very close by. A mixed flock of Masked Tanagers, Yellow Backed Oriols, Blue Black Grassquits and a Slender Footed Tyrannulet appeared just before we settled for a roadside lunch.
This disturbed clearing held over a dozen species..... 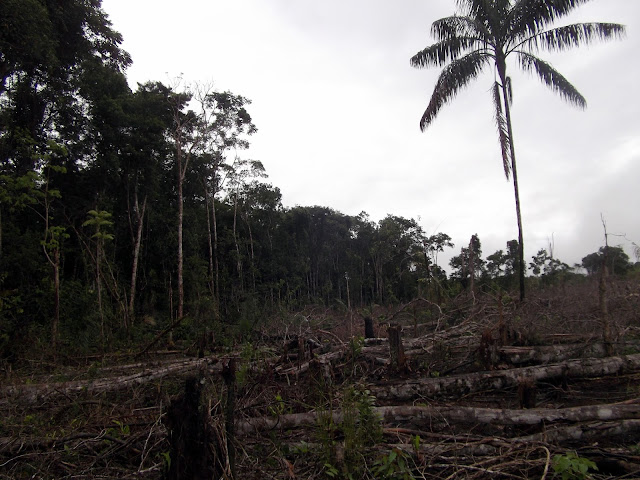 While we took lunch at the clearing 2 White throated Toucans and 2 Many Banded Aracari flew into a tree giving good views before we headed into the forest proper. We had a surprise as 30 ft into the forest bathed in a little light and perched just above head height directly over the path sat a Great Jacamar! It sat and posed for about 5 minutes before being disturbed my a small mammal that got too close, but what a bird. 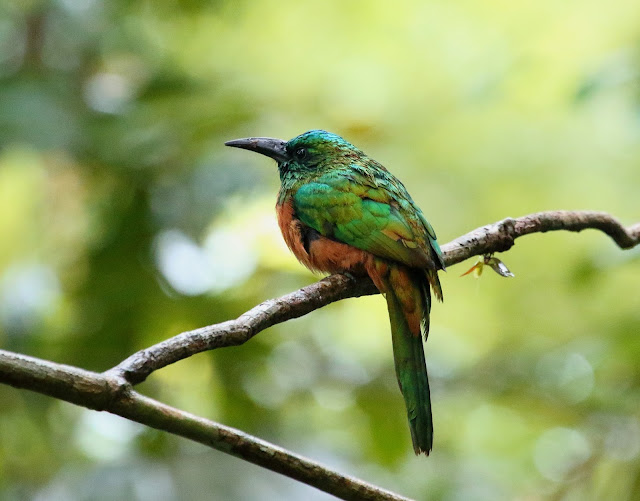 We headed off deeper into the forest and picked up another skulker with a White Shouldered Antshrike that eventually gave itself up after our perseverance, but other than that it was quiet, anyway we hit a flooded patch of forest that blocked our way so we decided to retrace out steps and head for the clearing again. 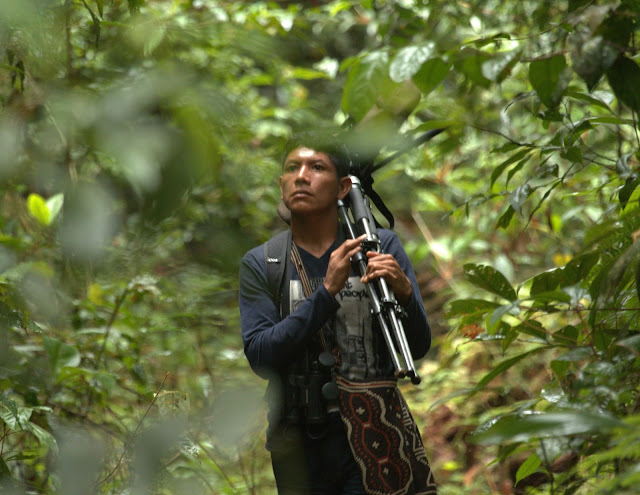 Back out at the clearing a Roadside Hawk perched while a Greater yellow headed Vulture soared above. A small mixed flock of Flycatchers, Orange Bellied Euphonia, White browed Purpletufts and Turquoise Tanagers appeared while we got fly over views of Cobalt Winged Parakeets.


Back at Pueblo Nuevo the sun had come out, we looked around the village and picked up Amazonian Barred Woodcreeper, White shouldered Antshrike, Dusky Chested Flycatcher, Yellow Bellied Tanager and Sulphury Flycatcher.
Jose, Agrapino and Jeff at Pueblo Neuevo﻿ 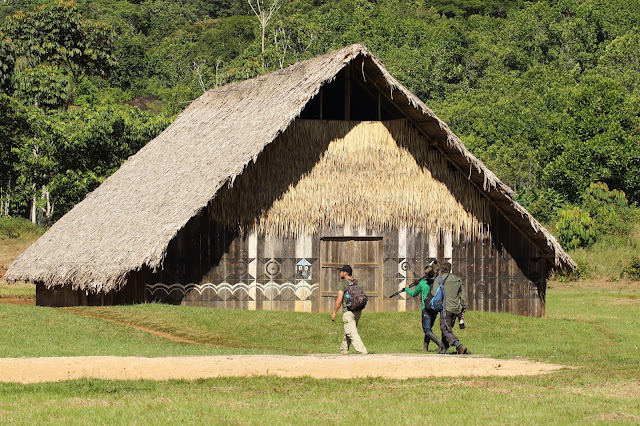 ﻿
Further birds showed really well, Gilded Barbet and Green Backed Trogon getting very close and a not so close but terrific bird was a lone Paradise Jacamar that perched 50mtrs away. 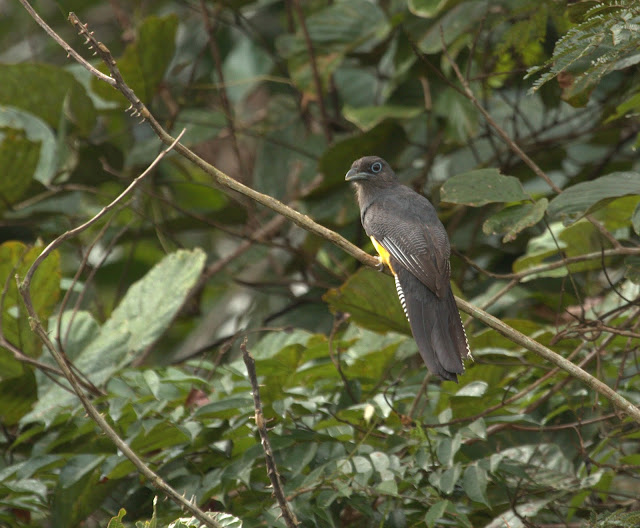 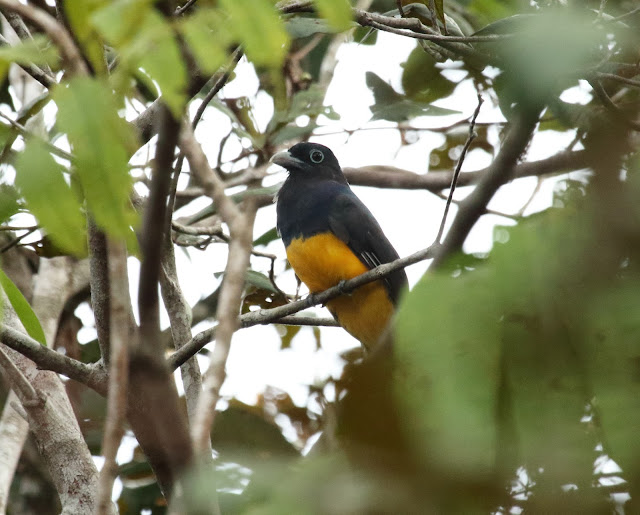 Before sunset we found a small holdings pond that held Little Blue Heron, Great and Cattle Egrets, Wattled Jacana, Lettered Aracari and Azure naped jays and we finished with a pair of Scarlet Macaw flyovers.

It had certainly been a tough birding day with one particular heavy downpour that made us take shelter but was eventually made good with some great Antbirds, Fiery Topaz,  Paradise Jacamar and Great Jacamar.
Posted by Dave at 21:54

Email ThisBlogThis!Share to TwitterShare to FacebookShare to Pinterest
Labels: Colombia

FANTASTIC post adn wonderful bird shots I love the second image of tthe bridge with the gorgeous reflection on either side of it.

The trip of a lifetime! Wow! Love the Jacamar and the Trogons!