A final mop up of the missing species and then we travel to our final destination in search of the Critically endangered Bahia Tapaculo.

Early morning again and the rain teemed down, we heaeded back to the Veracel reserve for a mop up session this morning, mainly looking for a couple of species, Reichenows Parrot and the elusive Black-headed Berryeater and any species that Jeff and myself needed for our life list. We were met at the reserve entrance by a perched Black-necked Aracari while we picked uncommon stuff such as Roadside Hawks and the odd Squirrel Cuckoo. We parked up again at the spot where we had spent the morning scoping for Cotingas yesterday and walked the track in both direction, we soon heard a Red-headed Manakin in the thick vegetation, after a search we finally got our male. A stunner! and complimented the sighting of the female yesterday, male Manakin = a proper tick. The first lifer of the morning was an Olivaceous Flatbill and in virtually the same area a second lifer with a White-lored Tyrannulet. It was good to be seeing new birds, especially those that can fall off the radar with all the excitement of yesterdays sightings. As we were walking back to the car Ciro got us onto a Black-cheeked Gnateaters, this gave us the full house of Gnateaters on this tour (four in total and all stunning beasts), and my third lifer of the morning. It was at this point that Ciro heard a flock of noisy parakeets, he called "Reichenows". We walked back to the car where we had parke in an open area where we could set up the scope, on this occasion we didn't need to. A flock of Reichenows Parrots flew overhead, they briefly landed a short distance ahead at the top of the tallest trees befeore moving on, nine in total, one of this mornings targets sorted, we could now set about finding the Black-headed Berryeater.  We retraced our steps from yesterdays search of the bird, tried new spots and generally covered a large part of the park with out success. Many times we had great call back but more often than not the calls were distant. Of course while your putting in the leg work, standing around and driving around various locations you pick up loads of birds, Boat-billed Flycatchers, Variegated Flycatchers, Blue Dacnis, Green Honeycreepers and Red-legged, plenty of Hummingbirds. We had a half an hour of success late in the day where we picked up a new trip species and completed the set of Trogons with a White-tailed Trogon. Then a nice bird for my life list flew into the same tree, a Blonde-crested Woodpecker. Pretty common bird for Brazil, but a stunning species and one of my most wanted trip species. The Black-headed Berryeater eventually won and for the third day running we tried hard but missed it, these sort of birds are definitely for another day or another trip, its what make the birding interesting.  We decided to head back to the Veracel Environmental station to see if the Banded Cotinga was still around. This time when we pulled up there was a Television Crew in attendance, further proof of the excitement this very special bird generates. Unfortunately for everyone it had not been seen since yesterday, how incredibly fortunate were we yesterday, unbelievable luck we had. 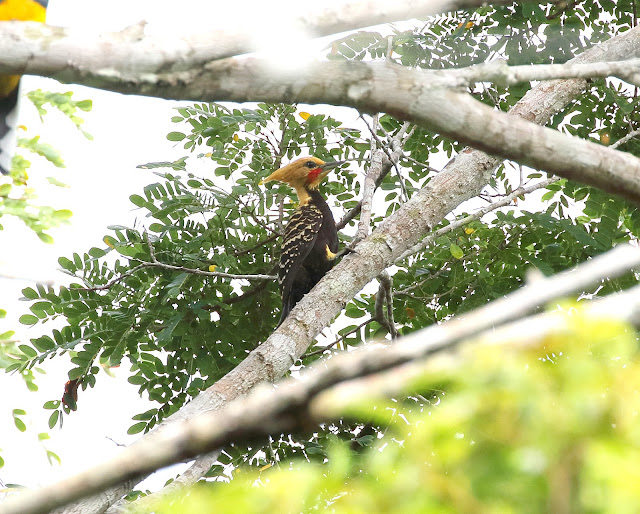 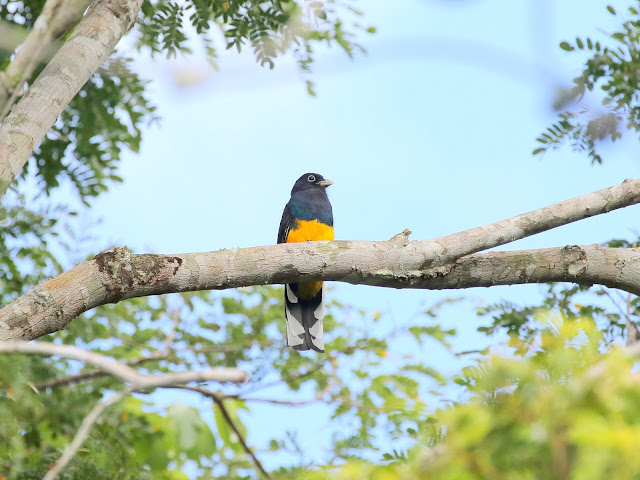 The evening session was dedicated to the White-winged Potoo again, and with the same determination as the previous two nights, we had even less success. Virtually no calls, the rain brought an early end to the search, we managed a number of Armadillos scurrying the through the vegetation and a call from the Tawny-browed Owl.

This morning we set of to the town of Itacare. We would bird along the way, meet up with one of Ciro`s friends who had good garden feeders and go in search of a bird that was recently thought to be extinct. Close to the Veracel resereve we managed a new trip species with good numbers of Orange-winged Parrots, and a second sighting for the trip of Peach-fronted Parakeets and Plain Parakeets. we arrived at Itacare just before noon and booked into our lovely accommodation. After lunch we went to do some garden birding at Ciros friends house, we would eat at his restaurant later that evening. I was hoping for a new species here with Green-headed Tanager, I missed it a few days ago at the Bright-rumped Attila site. We dint manage the lifer but we got a new trip species with a Rufous-breasted Hermit plus a whole host of birds giving great views while we drank coffee and relaxed. Silvery-breasted Tanager, Brazilian Tanager, Sayaca Tanager, Palm Tanager, Burnished-buff Tanager, Green and Red-legged Honeycreepers, Orange-bellied Euphonia, Violaceous Euphonia, Bananaquits and Thrushes. 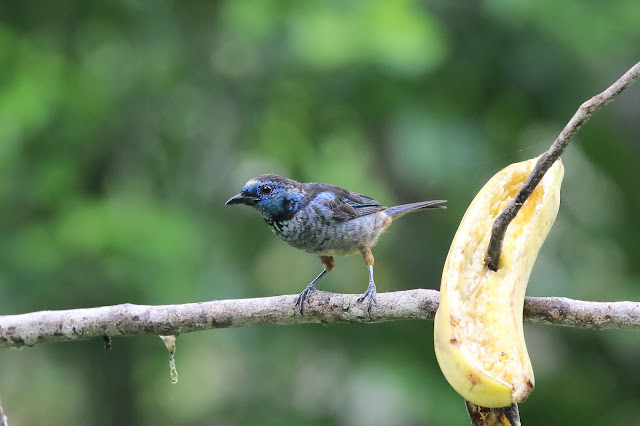 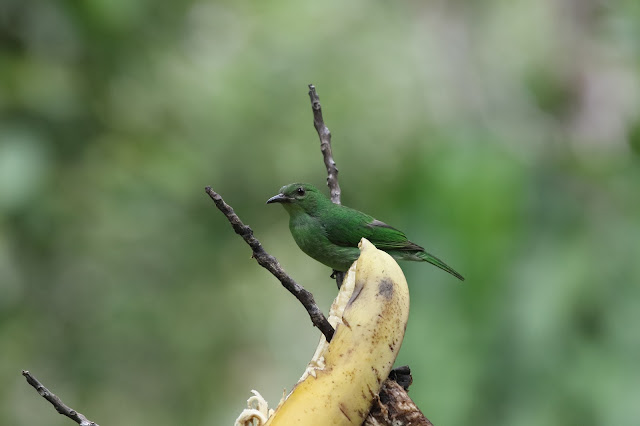 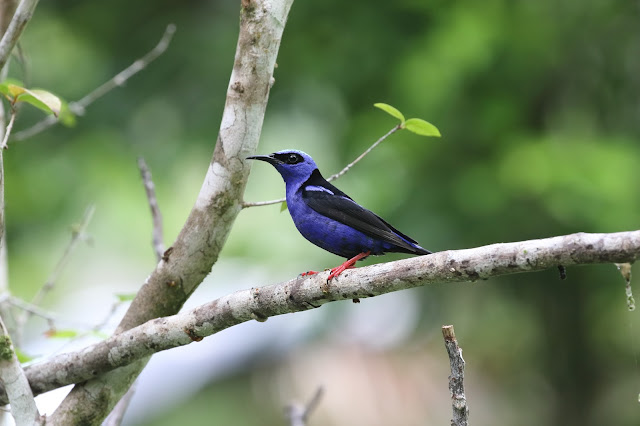 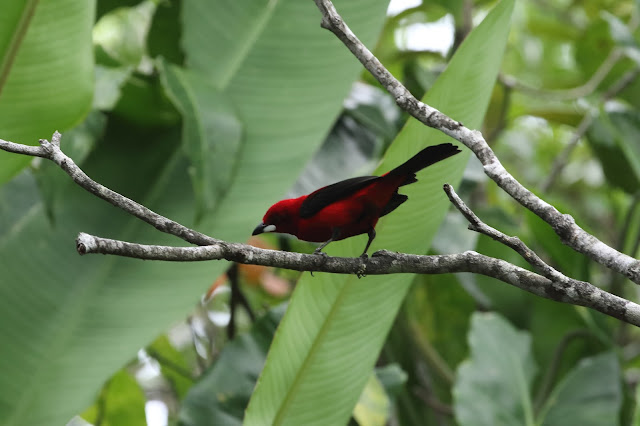 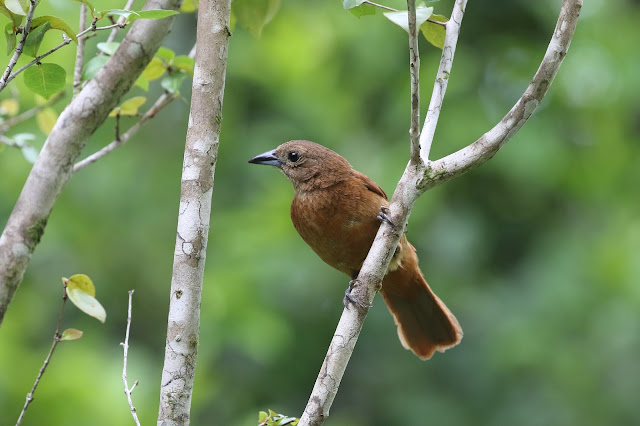 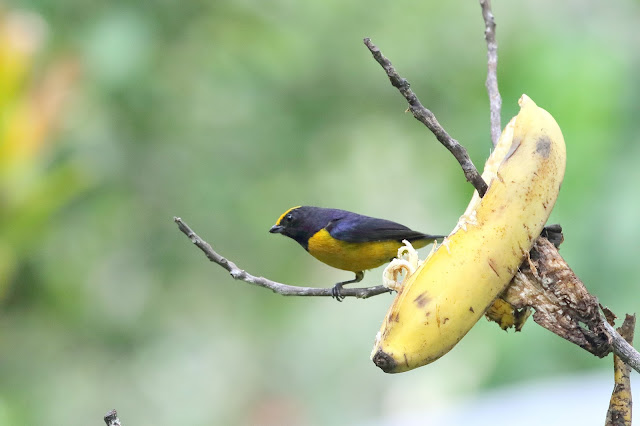 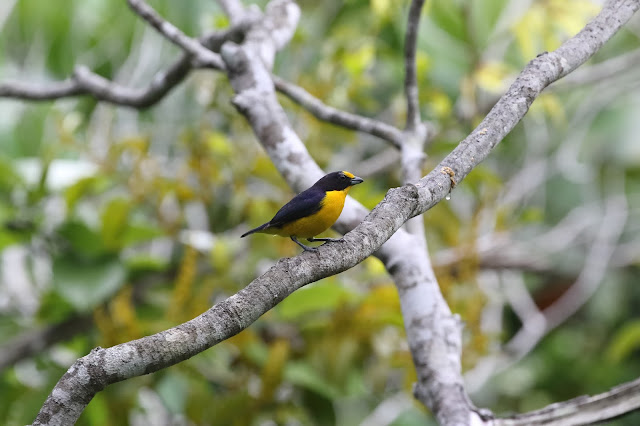 ﻿
We would spend the afternoon at a private area that Ciro has access to seeing if we could pick up anything new. Almost immediately we heard a distant calling Bare-throated Bellbird, we didn't pursue it, Ciro thought we could get it whilst we walked the track which would lead towards it as the track looped round. As we climbed the hill and into the shaded woodland we picked up a number of Antbird species. Scaled Antbird which was a lifer, Cinereous Antshrike was new for the trip and Silver-flanked Antwren which was a lifer. A mixed flock included a few Yellow-backed Tanagers, they were lifers as was the Streak-capped Antwren. Ciro had either kept this place quiet as he knew I would be pleased to add a host of species for my list or we got incredibly lucky. (Ciro spent time looking at mine and Jeffs lists every few days just to make sure he could track down any individual species that either of us still had outstanding). We got onto another mixed flock, this time it had a couple of birds that did surprise Ciro and seemed to be genuine bonus birds here, Whiskered Flycatcher and Pale-bellied Tyrant-manakin. In this flock alone we counted five species of Manakin, including stunning views of an Eastern Striped Manakin. A long-billed Gnatwren  was yet another trip species, but the failure to find the Bellbird on the way back to the car was a little disappointing, but it was a great location that added some good birds to the list. We headed back to town in search of the last bird of the day, another species that I had missed after Jeff and Ciro had seen it at Veracel. Ciro found a flowering bush that was a live with seven or eight bird species, one of which was the one I wanted, at least one Plain-bellied Emerald was all I needed. 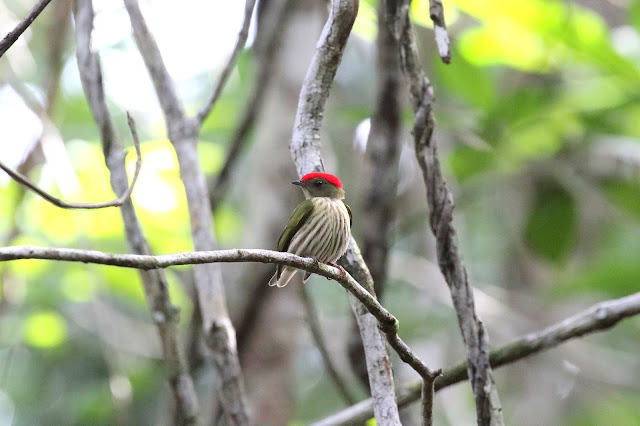 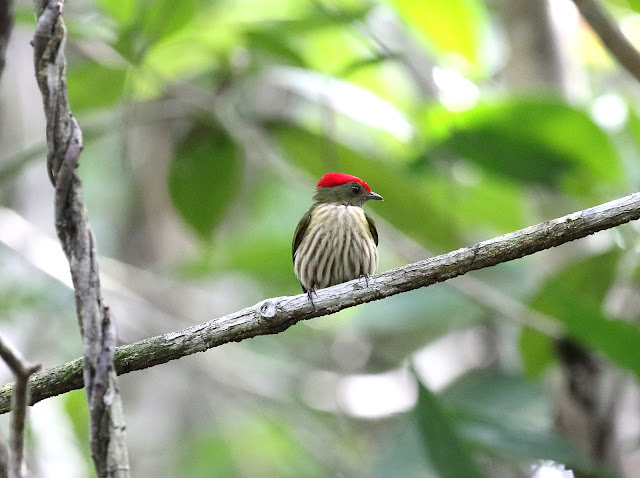 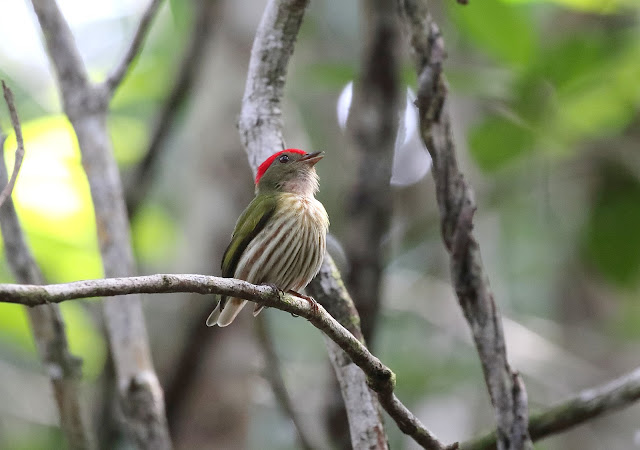 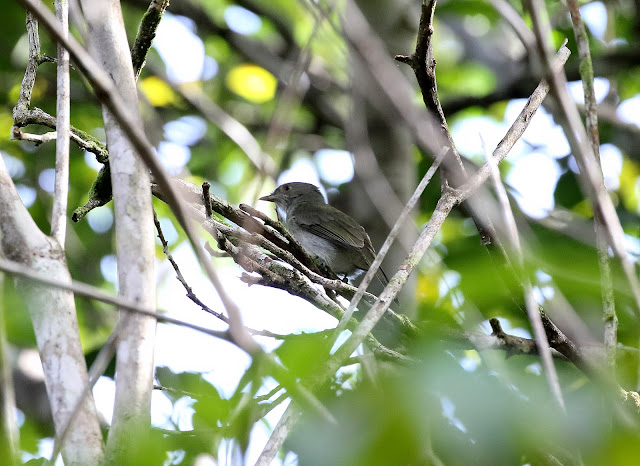 ﻿
﻿
Tomorrow we go on a bit of a trek looking for one last species in this North East corner of Brazil. We drove to the Reserva Agua Boa, Ubaitaba in the state of Bahia looking for the Bahia Tapaculo, it is classified as Critically Endangered, and is facing an extremely high risk of extinction in the wild. It was actually thought to be extinct less than a decade ago. With statistics like these, hope of seeing it is minimal. Anyway the final day of the tour brought the three of us here to trek up a forest path which would eventually have us reaching the summit before then trekking down into the valley through the dense vegetation. To cut a long story short, we waited patiently while the bird sang, this is great on one hand as we know the bird is around, bad news on the other hand as the bird isn't moving..... certainly not towards us. After a while Ciro heard a second bird call (very distant), big news for Ciro and the Bahia Tapaculo, as tit has been a few years since Ciro saw or even heard two birds in this location. Would we see the bird? Yes we would! Two fleeting glimpses as it walked into a clearing and a few minutes later walked back. We left quietly. The trudge back over the summit and back to the car would have been a slog if we had missed the fella, a great feeling of relief all round, however I needed just the one more bird before we head off to pack for the airport. I had missed the Green-headed Tanagers a few days ago, and we just hadn't stumbled across one since, Ciro worked a little magic and we found one before we hit the town, smart bird.

The travelling is over vast distances, but our driver Ciro was good, safe, efficient, and knows the region like the back of his hand. Ciro Albano is also an exceptional bird guide, renowned for his expertise and knowledge even by his peers, and is a legend amongst Brazilian birders. His companionship was warm and his hospitality was second to none. Of course without him loaning me all his spare equipment my trip would have been a disaster. We all know how birders across the globe bird with their ears as much as their eyes, Ciros knowledge of bird calls is outrageously impressive.