The red grouse is a truly wild game bird found only in the British Isles and Ireland. The main distribution is in the north of England and Scotland. Its typical habitat is upland heather moors. I am lucky enough to live close to some fabulous Peak District moorland here in East Cheshire, very close to the borders of Derbyshire and Staffordshire. 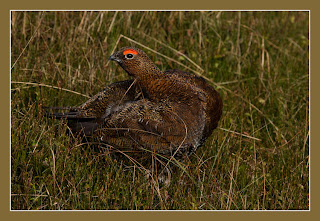 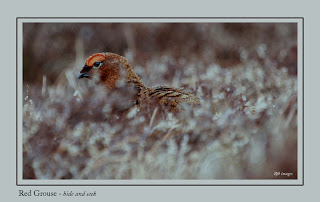 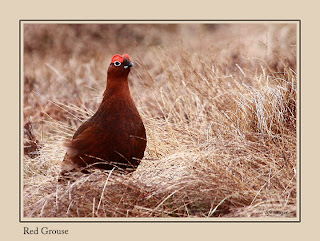 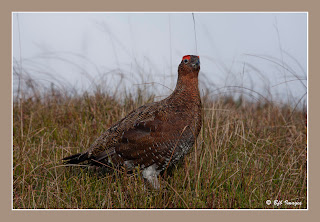 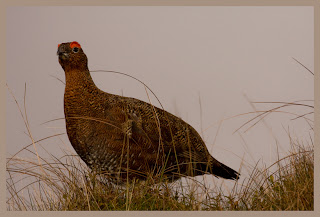 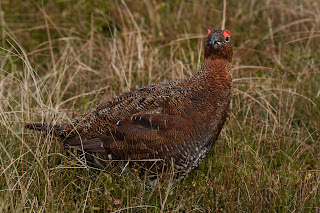 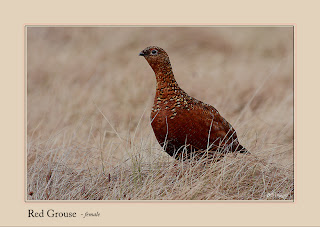 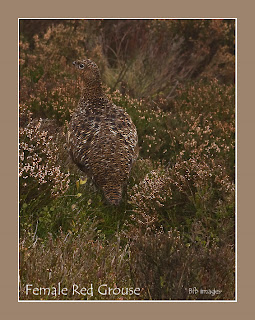 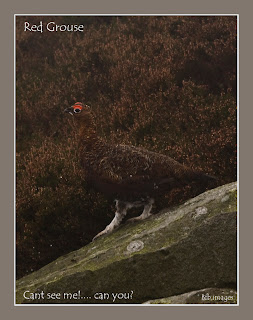 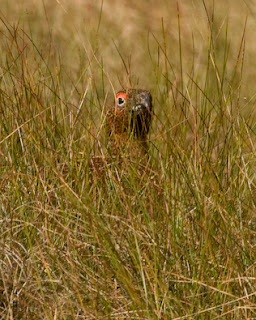 The winters are incredibly harsh on the moorland and the weather can deteriorate for months often having the main passes betweeen the towns of Macclesfield (in Cheshire) cut off from Buxton (in Derbyshire),

One of my favourite areas is Axe Edge Moor, this moorland lies between the two towns and is very close to the iconic Cat & Fiddle public house, renowned for being at the highest alltitude in England it is this particular part of the moorland that I favour and is a stronghold for the Red Grouse species. 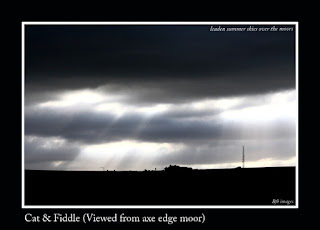 and the Summer time 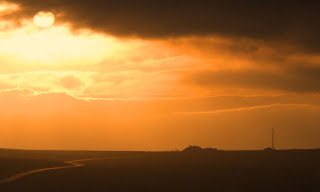 Despite the very harsh winter weather of course the summer months can be a very beautiful and be inspiring in such a magical place. 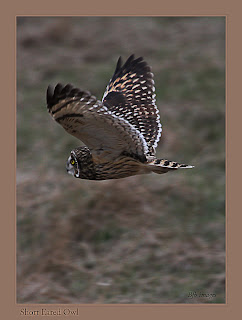 unfortunatly because of the Red Grouse it is also home to a rather ugly preditor....the human shooter, I dont like the word hunter in this topic as they hardly have to hunt these birds, simply flush them out and take pot shots at close range... grrrrr...... Less said about that the better! :(
Posted by Dave at 09:25

I think you should do what I do when Shooters are around BLOW YOUR CAR HORN and I mean I sit on mine...and anything they may be creeping up on or sitting in wait for is LONG GONE..lol love to do that,
Excellent photograhy..of the grouse and the short eared owl...awesome!
The grouse here in the US is on the decline as are most all speceies these days..here in SC the BoB White Quail (a game bird) is not even around anymore, I havent seen one is over 3 yrs! Yet they used to be all over the ground--

Stunning images Dave. We do have some brilliant wildlife in Cheshire. Otters are in the River Dane between Middlewich and Northwich and you have the source on those moorlands.

Super images Dave of a species I haven't encountered for many, many years. I'm slightly envious of the SE Owl as well!!

Wonderful series. The grouse is cool looking and similiar to some Grouse seen here in the US. It is a pretty color.

This is a terrific post. So full of great images, particularly of the grouse.

A great series of photos. The Red Grouse is such a beautiful bird. The Plovers are interesting - they look similar to some that migrate down here to Australia.

Superb set Dave. I've not seen a Grouse in years. I'll have to make the effort and head up your way in the spring.
Couldn't agree more about the 'predators'.
I like Sondra's idea lol

What a great set of pictures! Well done.

Can remember see huge flocks of Oystercatchers up on the Solway many moons ago - one of the nosiest group of birds I have ever seen!

Those shots are fabulous.
What a fascinating and beautiful bird!
Sad about the shooters - we have them here too, prob. more extreme than yours (no regulations whatsoever) :/

Great set!! Those grouse are pretty birds. Boom & Gary of the Vermilon River,canada.

Just phenomenal. I started off reading your post and was quickly taken with the thought that this is the only place this bird exists and how lucky I was to be seeing your images and then BAM. We're(man)hunting this Bird? And this is considered sport? Inconceivable.
This is one awesome post and demonstrates the fact that a true challenge is to capture these iconic animals on camera!

so many great photos in this post. That grouse is a really cool bird, love the last two photos of it. Nice compositions!

this is something I´ve never seen. Thanks for sharing.

About my woodpecker post. I didn´t have serie setting on the camera. I managed to take three shots anyway. But I did expect the pecker to fly, not jump. :):)

Awesome series of images of the grouse -- what a beautiful species!

Beautiful series, Dave! I particularly like the one with the grouse being almost invisible, with the body merging into the heath behind and the legs into the lichen-covered rock beneath.

All grouse shots are great but the last one is so funny! The sky images and the flying bird are fantastic.