A sight for sore eyes

I have mulled over whether to post this due to the sensitive nature but have decided to go ahead. This blog is here to chronical parts of my outdoor experiences in life.

In October 2009 on an otherwise normal day that I should drive the hour or two to visit my parents in North Wales litle did I expect to witness something incredibly sad. I always make the short walk to the beach to catch up with some sea and shore birds while mum cooks tea. When I got to the beach I scanned up and down the large flat sandy expanse and noticed what I though at first was a small boat tilted on the sand.... it was around half a mile away. I looked again and realised it wasnt a boat. The shape and size made my initial thoughts of a Dolphin but as I hurried towards it I soon realised this was indeed alot larger.


I was the only person in the area and was confronted with this: 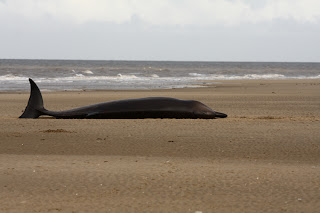 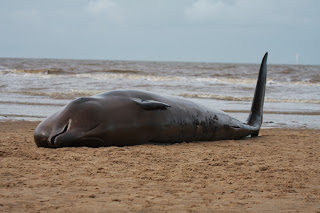 The tide was coming in so the Whale must have been beached for a few hours, she still felt warm and soft to the touch. No visible signs of injury, only a few marks where birds had started to feed. 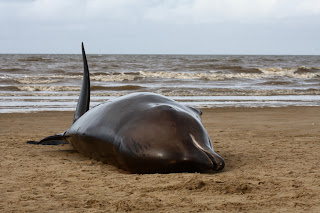 I spent a few further minutes completely on my own and in abit of shock.... I took images just to ensure it was real... someone in the world maybe glad of this information and images 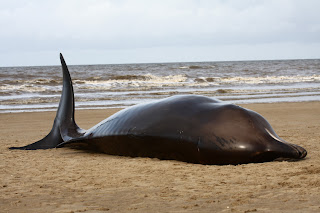 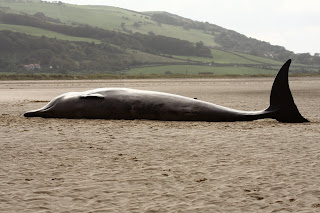 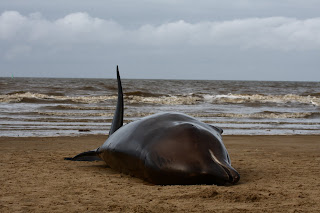 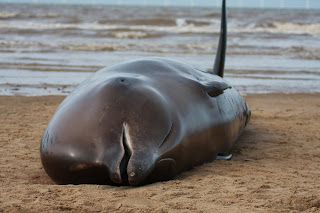 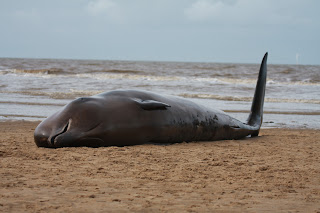 A passing fishing boat stopped to check it out, this image gives an idea of the tail size. 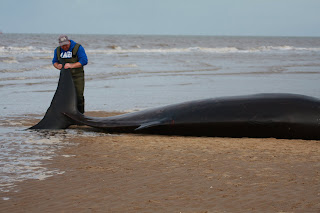 I had been here for an hour and notice how the tide had come right up to the stranded whale. I knew the tide wouldnt shift it but it would make work difficult for the arriving Coast Gaurd.

Indeed the Coast Guard (with an entourage of local kids) arrived just as the tide ﻿lapped up to the Whale. 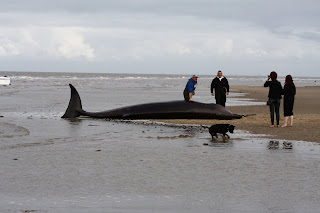 A post mortem was eventualy carried out and the following information released:

The carcass was dragged inshore across the sands to SJ 093 840 which took it into the next county, Flintshire where the post-mortem examination took place.

Following this, further corresponce took place between myself and Cestation scientists in Sri Lanka who keep records and investigations of all Cestation Stranding throughout the world

Media information regarding the stranded
from The Sunday Times:
"Scientists say man-made noise equipment, including anti-seal sonar devices used in fish farms, is driving deep-water animals such as whales to shore, where they die.
A northern bottlenose whale was washed up dead on a beach in Prestatyn, North Wales, on Saturday morning, the tenth of the species to become trapped or stranded on British shores this year.
Scientists are blaming not just military sonar, but a large range of man-made noises that they fear are driving the normally deep-water animals to shore."

Email ThisBlogThis!Share to TwitterShare to FacebookShare to Pinterest
Labels: Whale

There are some caveats in attempting to harness nature, i.e. fish farming. We desparately need to fund science to overcome these. Great post!! Boom & Gary of the Vermilon River, Canada.

This is so sad. The photos are fantastic though.

A wonderful post Dave... Sad but at least you recorded what had happened.

That's an amazing story Dave and what must be a once a once in a lifetime find. Sad for the whale but hopefully some good research can benefit.

Great photos, but so sad.

It is sad. But it is also good that you were able to document the event and share it with people who need to know -- and with us, because it is good to learn. I'm glad you posted it.