Not quite the early start that we endured the previous day as we only had half the mountain to drive this morning. We would then walk down the Montezuma road from mid to lower elevations.
On a warm and dry morning the first bird located on the way up was a White Throated Quail-Dove on the track. We stopped at a clearing where we picked up some of the more common species, White sided Flowerpiecer, Violet Tailed Sylph, Empress Brilliant, Handsome Flycatchers and Slate Throated Redstarts., as well as Endemics such as this Gold Ringed Tanager. 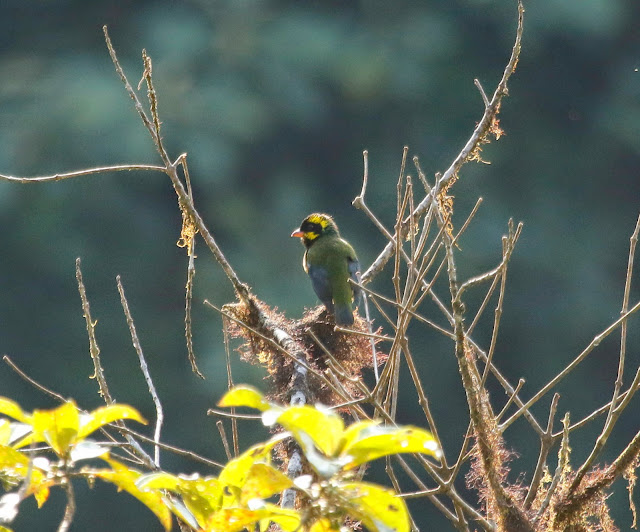 ﻿
I caught sight of a Black and Gold Tanager sat out in the open, I called everyone back but unfortunately it flew before anyone could get on it. Walking down the hill for the next 500 mtrs the others had put doubt in my mind, I started to think maybe it wasn't as we had seen plenty of the Lachrymose Mountain-Tanagers, I was convinced that I didn't see the yellow cheek markings, anyway no need to ponder as I picked up another pair of the Black & Gold Tanagers that everyone got onto and re assured myself of what I had actually seen  ten minutes before.

A stop for breakfast in the shade re charged the batteries before we set off on a day where I ended up with dozens of lifers with some incredible birds.
Breakfast on the Montezuma Road (Chris, Robin, Jose and Fernando) 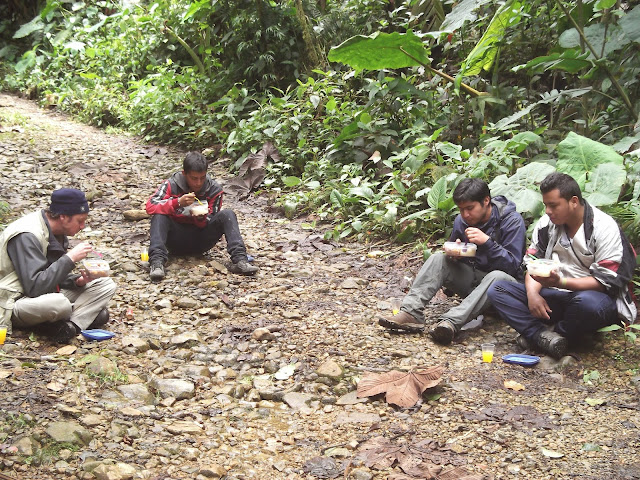 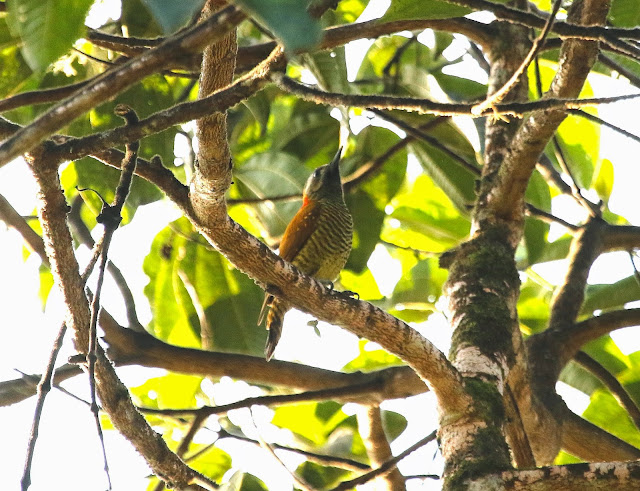 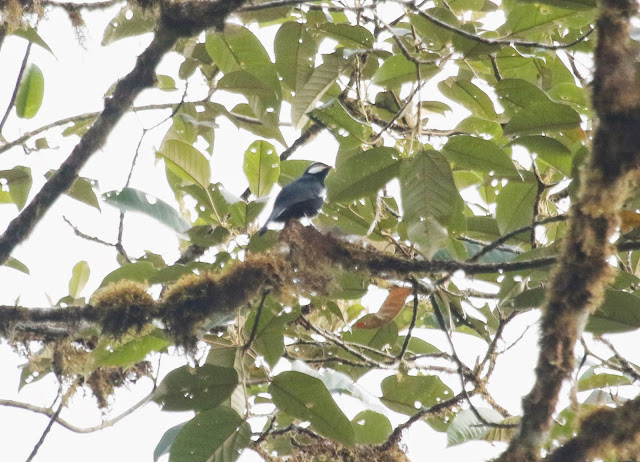 A we walked down we passed dozens of Columbian Squaddies as they yomped the 14 kilometres up the mountain with 80 kgs on the back.... glad I was walking down hill.
One squaddie takes an interest in the birds, "good on yer fella!" 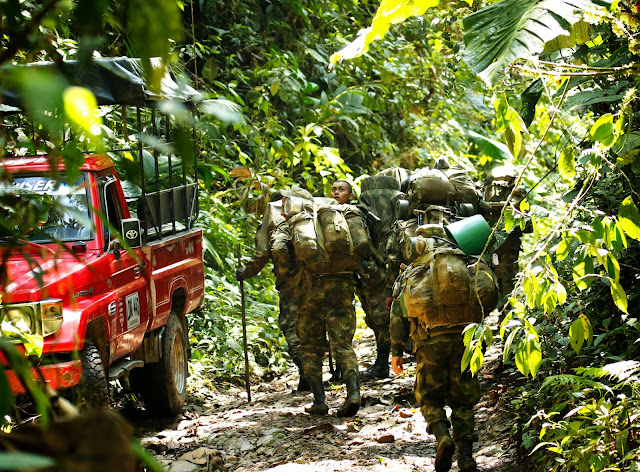 Birds from every angle - Empress Brilliant, White Bellied Woodstar, Greenish Puffleg, Brown Inca, Velvet Purple Coronet, Violet Tailed Sylph, Dusky Bush-Tanager and although fairly common this Cinnamon Flycatcher, its still one of my favourites..... as well as plenty of others. 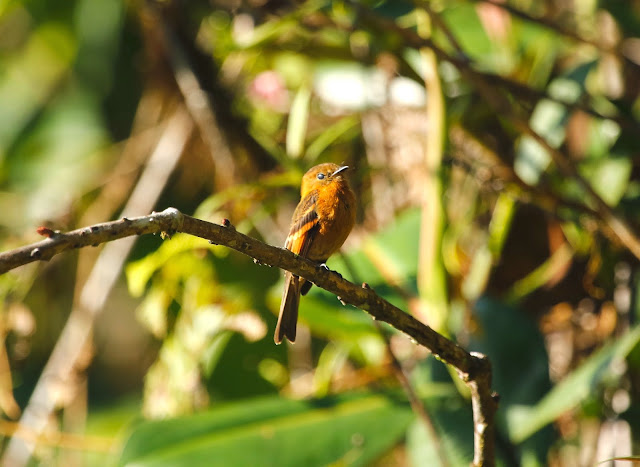 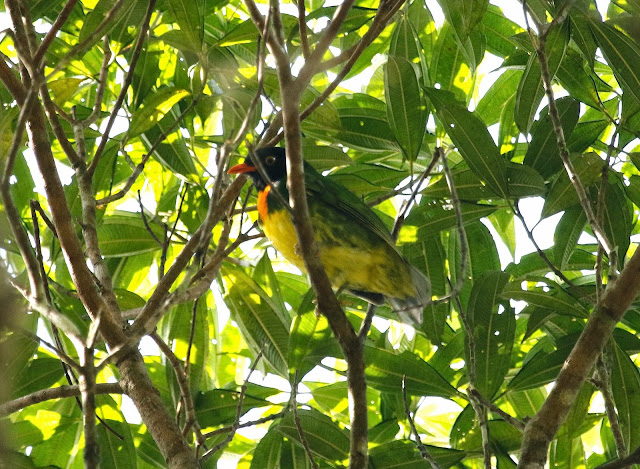 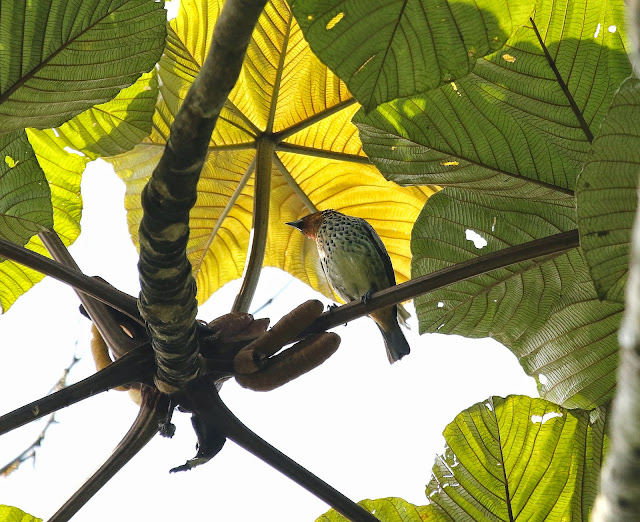 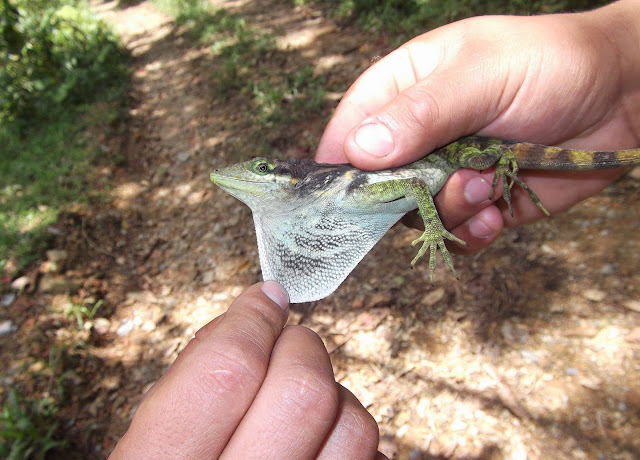 The flora wasn't to bad either with this incredible Dracula Orchid 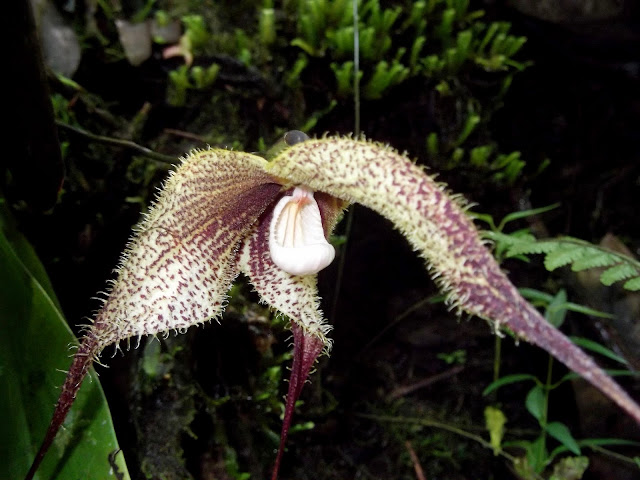 this is a bird world - Spanish message on the Montezuma Road﻿ 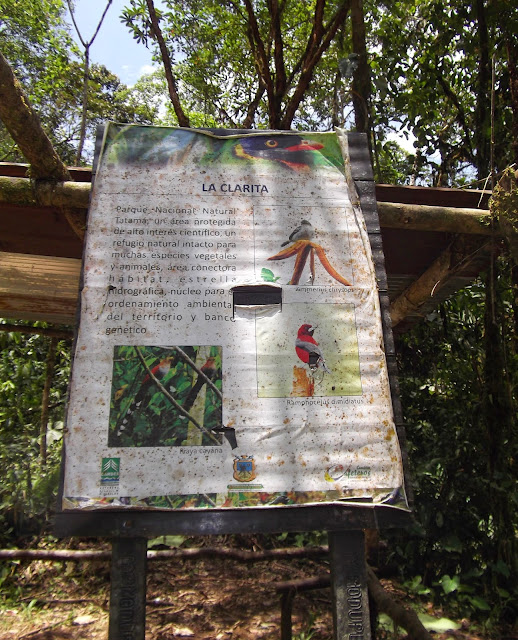 We were still missing a few target species and we were fortunate enough to have what turned out to be an incredible ten minutes of birding.
First Fernando found us an Olivaceous Piha (Noah's Target bird for the day), then add Toucan Barbet (which gave us the run around for a while), Tricolored Brush-Finch, Scaly Throated Foliage-Gleaner, Uniform Treerunner, Lineated Foliage Gleaner, Scale crested Pygmy-Tyrant, and the as yet un-described Alto Pistone Tapaculo..... I am reading my notes now  as I type this up and am thinking that was a memorable moment of the trip. I walked down the hill with more than a handful of lifers and a beaming big grin..... happy days. 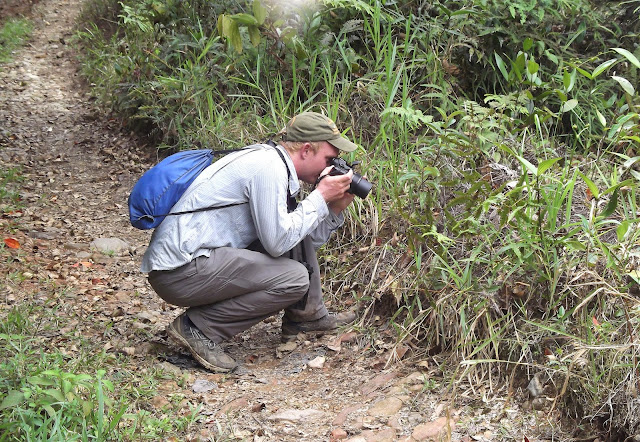 After lunch we went in search of the Creasted Ant-Tanager.  It responded to the tape but wouldn't come in, Noah went after it  and his perseverance paid off as ten minutes later he came out of the darkness with a smile and record shot. He was happy for now.

Noah in search of the Crested Ant-Tanager﻿ 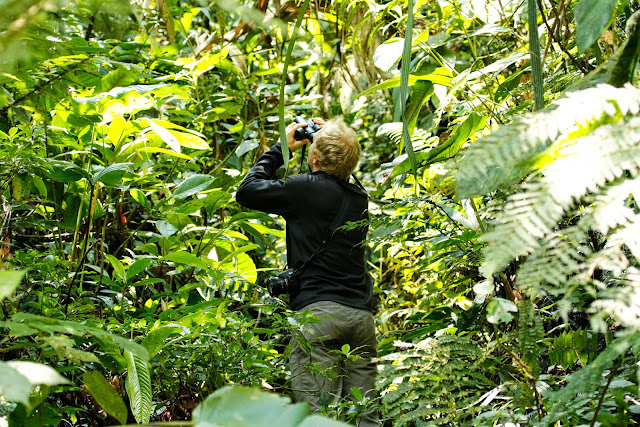 A short while later we stumbled across a small waterfall and Fernando noticed a nest hanging in front of the waterfall attached to a single Vine. In the distance we then heard and saw movement of a Crested Ant-Tanager..... then 2,3,4....... eventually 7 came out and flew across our path and away. So glad I didn't follow Noah up that hill a short while before.
I still had a target to get and Jose made sure we got it. We stopped at the river for about 15 minutes and waited for a White Capped Dipper. 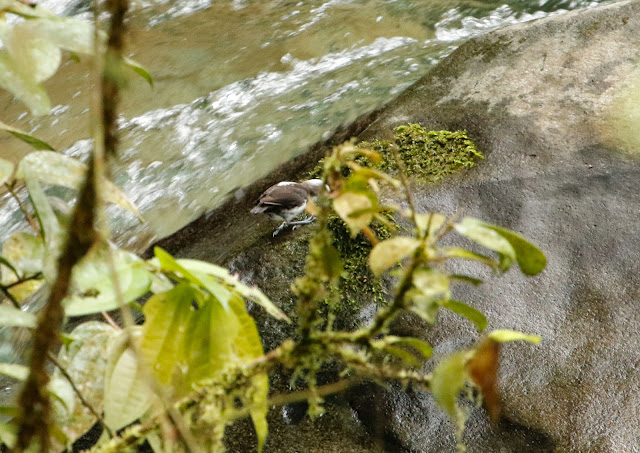 Eighty Eight butterfly takes a drink near the river 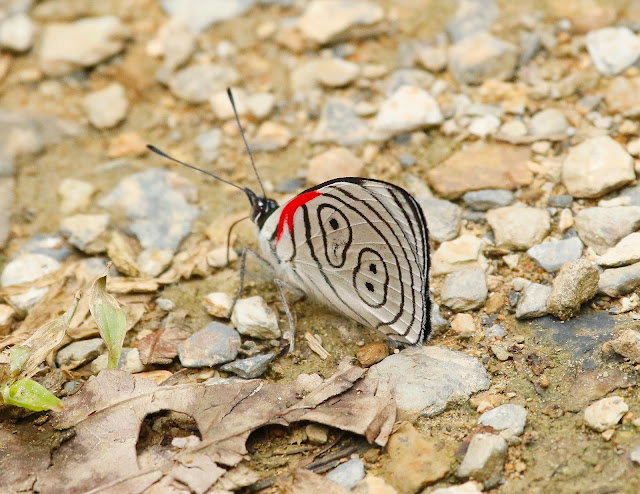 As we neared the Lodge we bumped into this Field Research team. ﻿ 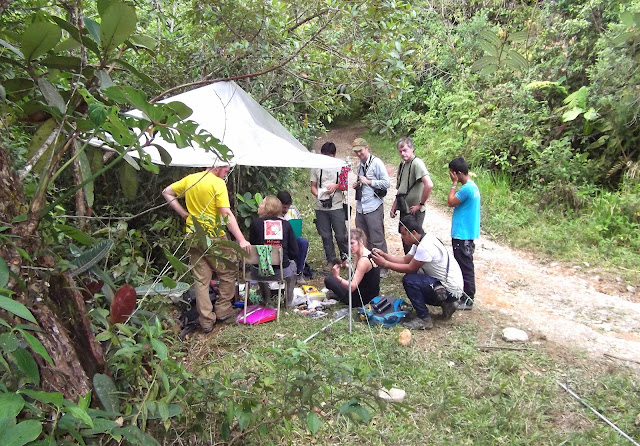 during the day they had ringed a Pavonine Cuckoo, unfortunately for us it wasn't still in the area as it didn't respond to tape but we were able to get close to this Tawny Throated Leaf-Tosser﻿ 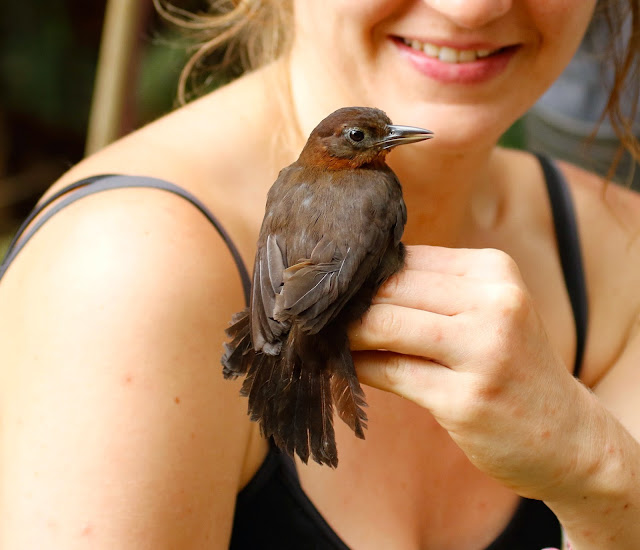 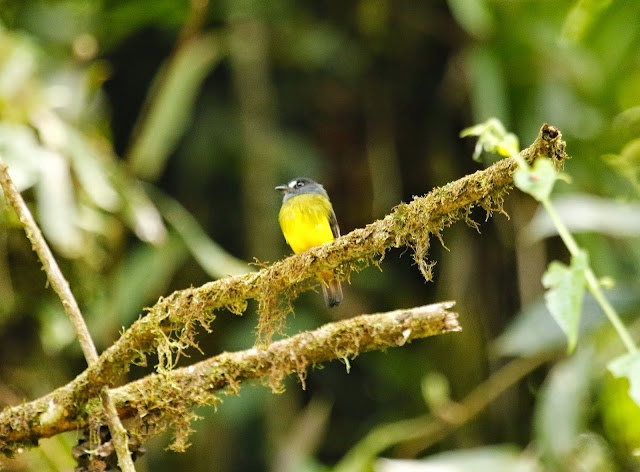 Back at the lodge we had time to watch the array of Hummingbirds at the feeders, as well as Euphonias, Seedeaers, Tanagers a Green Honeycreeper and yet still had time to look for and find a Blackish Rail.......
A great end to a fantastic days birding.
Tomorrow we leave the Western Andes and head for the Central Andes and the Lodge at Rio Blanco.
The view of the Western Andes as we left and headed to Rio Blanco 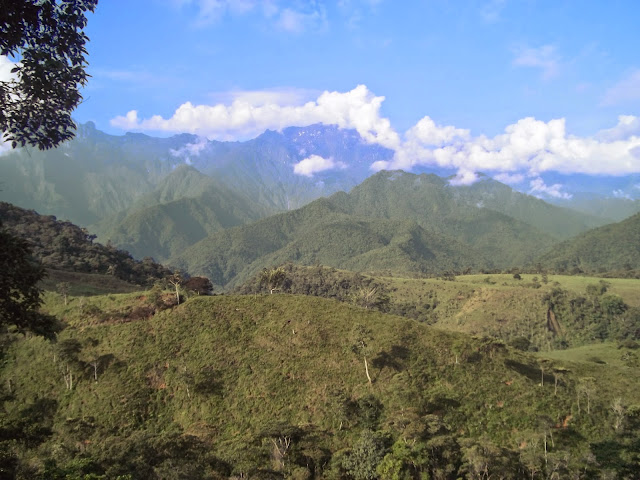 Email ThisBlogThis!Share to TwitterShare to FacebookShare to Pinterest
Labels: Colombia

House sparrow, blackbird and small white on my list today. Think I'll give up now, in the face of such wonderful content!

Simon, Kind words indeed and much appreciated, however after a trip like this my beloved back garden hasn't reignited the appetite yet.... too much to take in and catch up on. Wait for part 3 - it was truly one of the the best experiences I have ever had while watching birds.....

What an amazing trip and you saw so many outstanding bird species. Thanks for sharing.

Awesome photos. Thanks for sharing.