and a Long Tailed Duck.

Nearly a week had passed and the debate had receded from whether or not it was indeed only the 5th ever record of Baikal Teal in the United Kingdom or had it jumped a fence from somebody's collection. The bird was immediately guilty until proven innocent, only in the UK do we give murderers a better start than the birds.....  anyway the conclusion is genuine BAIKAL TEAL in Lancashire, only 90 minutes away. Gonna go? you bet.

Chris and myself arrived at Marshside, Southport mid morning to news that it had been seen but the flock of Wildfowl that it had been with had been flushed by a Peregrine Falcon early morning. It hadn't been relocated. We set off in the general direction of the last sighting and quickly picked up a Long Tailed Duck. A UK lifer for me #235. I had seen flocks of 100s in Norway but had managed to miss any UK sightings, this was an unexpected bonus. 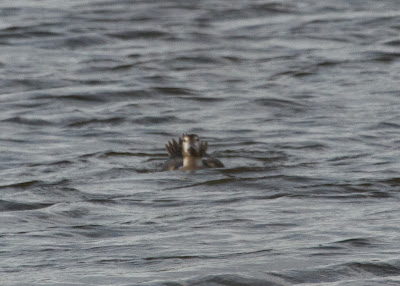 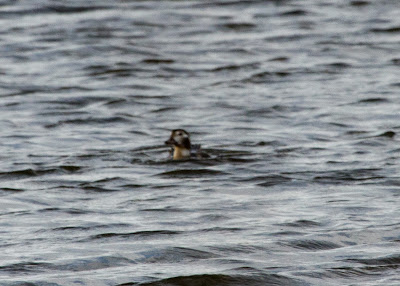 Arriving at the sea wall embankment overlooking a large marsh we were inundated with thousands of Wigeon, Teal, Lapwings, Pink Footed and Canada Geese and two bird watchers who were also looking for the Baikal Teal. As we approached the birders said that they thought they were onto the bird but it was proving difficult relocating it in the marsh ditches and ever moving flock of Wigeon. It  took a while, but someone got onto it again, brilliant, but passing on the exact location to others was proving difficult, no obvious land marks were visible so it became something like this "left of the piece of dead grass pointing at 2 o`clock which is just right of the fattest Wigeon that is waddling towards us". "Which piece of dead grass pointing at 2 o`clock...... which fat Wigeon waddling towards us"
Anyway the flock was semi distant, (too far away for images, but now on reflection I really wish I had taken even the crappiest record shot I could have mustered) but we all got onto it. It rested with head half heartedly tucked in and an eye blinking constantly alert. Its head pattern and colouration stood out a mile, what a bird. We had 30 minutes uninterrupted views of it as more and more twitchers arrived eagerly asking where it was. We could now aid in others getting their scopes onto it..... one fella let me get him lined up and just as he acknowledged the sight with "got it Wow!" the flock had been spooked. The Baikal Teal raised its head, stretched its neck, it was on high alert and was about to take off......I was lucky enough to see the bird in full glory for a few seconds and as expected the flock took flight, we tracked it for a few seconds more in the mass of Wigeon and Teal but lost it as they all dropped even further back on the marsh.
We didn't relocated it during our next hours stay but we had seen it, it is a gem of a bird, and what a privilege. We left 20 twitchers desperately seeking further sightings of the Baikal Teal.
Life bird #1050, UK bird #236
﻿
Posted by Dave at 13:03

Great to see such an interesting bird - even without the photos you wanted!

a fabulous experience to sight a rareity like you did Dave

They are awesome ducks, great sighting. Congrats on your lifer.

How exciting to see a rare bird!