We had a morning's birding the Caatinga area of Potengi with Jefferson Bob again. There were a few targets, with the main ones being White-Browed Antpitta and Ash-Throated Casiornis.

As we parked up and got out of the car, four over flying Comb Ducks were an only sighting of the trip and a lifer for me and we added Red-billed Sythbill to the trip list as we hiked up a steep dried river towards a plateau of Caatinga scrub. Not far into the hike it was pleasing to see a Great Xenops again, but much like yesterday the photo opportunity was difficult as the bird was sat in deep vegetation, although two views in two days is good enough for me. A little further on and we were rewarded with a fairly showy Ash-throated Casiornis, in fact I think we had a pair. One certainly sat out but the light was in the wrong direction, again making photography difficult. 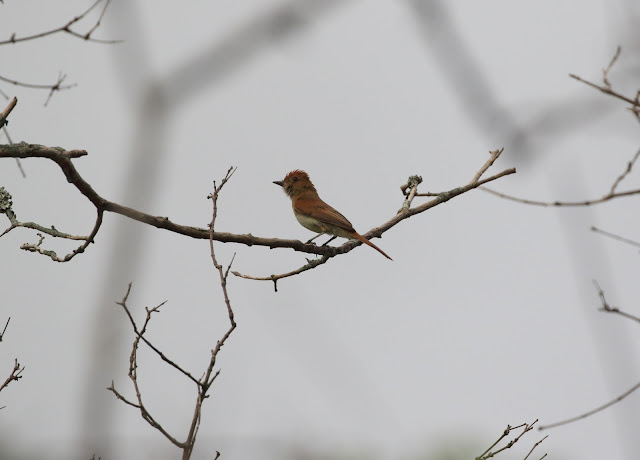 Rufous Tailed Jacama, Greenish Elaenias, Yellow Flycatcher, Sayaca and Burnished Buff Tanagers were all we could find further on, so we doubled back and took another track. We were quickly rewarded with at least two calling White-browed Antpitta, we spent an hour trying to pinpoint one down, and eventually were able to go into the Caatinga scrub in search. It took a while but we were able to edge close enough to finally see it. It walked along a fallen log, the spent the next few minutes edging a little closer to us, overall we had good views, we left it in peace feeling very satisfied. Bobs phrase of "Os Ingleses suaram a camisa em busca do Torom!" was very apt as it had been a tough couple of hours trying desperately to get onto the White-Browed Antpitta .

The translation...... "The English sweated the shirt in search of the bird!", it made me laugh.

We could head down the mountain with the two main targets accounted for, we still added more lifers with a Grey-eyed Greenlet, Ochre-cheeked Spinetail, Caatinga Antwren and a Planalto Slaty-Antshrike, whilst down at the car a pair of Green-backed Becards  sat in a closeby tree, and a pair of Tawny Piculets foraged on some snags above our heads.. We had used up a large amount of the morning looking for the Antpitta and had to drop off Bob and say good by. The Potengi area over the last 24hrs had been very productive with plenty of special birds, the highlight bird for me was the Ruby-topaz Hummingbird, but the encounter with the pair of Stripe-backed Antbirds was great fun to watch. I wish Bob great success with his venture in building a birding watching lodge. 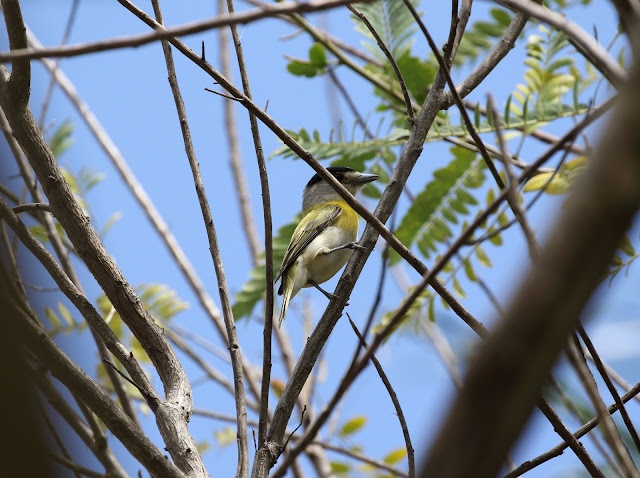 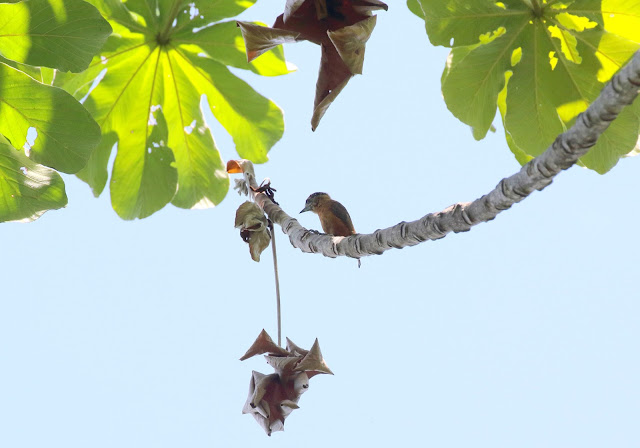 ﻿
We has a long drive ahead of us as we were to head to Canudos and the Lear's Macaw area. but we would stop at Crato on the way to visit the Araja water park at Chapada do Araripe. We were hoping to see one of the worlds newest described species, which incredibly for such colourful bird wasn't discovered until 1996 and then only described in1998.
The Araripe Manakin is a real stunner, its range is on the north-eastern slope of the Chapada do Araripe, and we were heading to a Theme Park to try and see one. Almost immediately upon paying at the entrance booth, you walk along a paved footpath that runs along a small stream, this is prime Araripe Manakin area. Sure enough within a few minutes we had seen 7+ females but not a male in sight. As time passes you console yourself that at least you have seen an Araripe Mankin, but of course its the stunning male that makes the journey really worthwhile. Happily after twenty minutes Ciro located a juvenile male, scraggy looking and in-between moults and without tail feathers, but it was definitely a male. Blue Dacnis kept us company while we continued to search, and a little further on Bingo! Just above our heads we located an adult male Araripe Manakin. Great views and a few photos and feeling much much better, we could relax now knowing that one of the main trip targets was right above us. We headed back towards the park entrance where we had seen the females in the hope that if females are about there maybe be males....... such as these things happen in life. No surprises then when a male obliged with a few poses more or less at eye level. We saw at least 4 adult males, 1 juvenile male and over a dozen females. Ciro left us enjoying the bird for a little longer than he should have as we had used most of the daylight up and we had a long journey with poor road conditions to deal with so begrudgingly we all had to leave. It is one of the few times that I have questioned myself when leaving a place with an incredibly special bird if I will actually ever see this species again, it certainly wont be turning up anywhere unusual so the answer is probably a no......what a real shame. 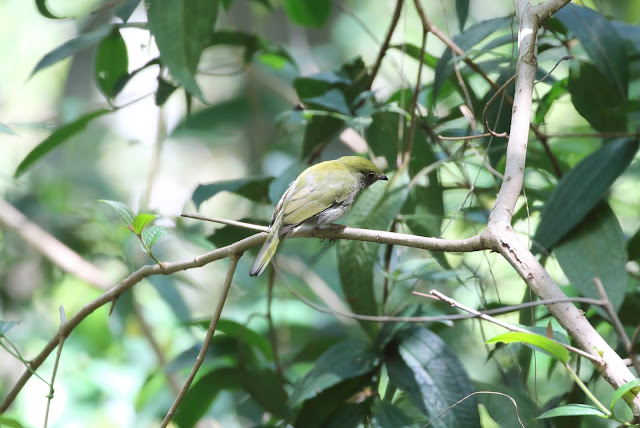 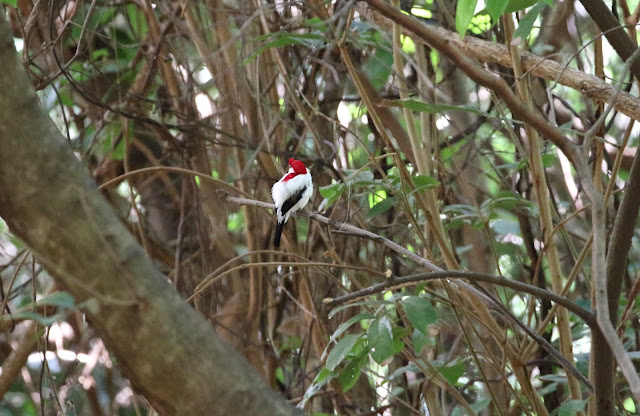 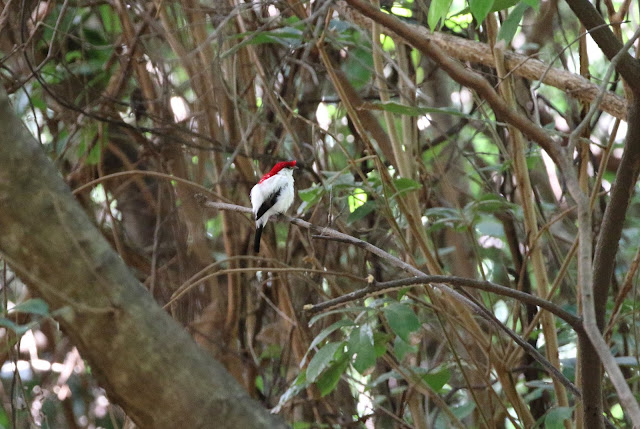 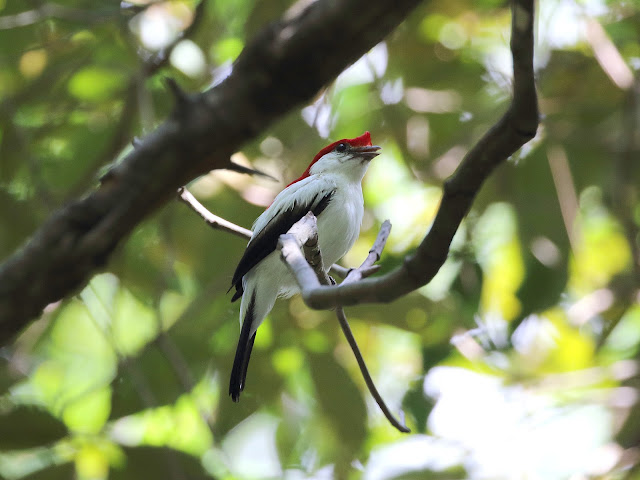 ﻿
We headed off towards Canudos were we would eventually arrive at the town in the dark and booked into the Lears Macaw reserve, tomorrow morning should be just as spectacular as today was.

From our accommodation we set off on a relatively short morning drive to the Lear's Macaw roosting and breeding site, along the way we disturbed plenty of Paraque Nightjars and a single Scissor-tailed Nightjar. We arrived at a small picnic site where we ate biscuits and drank coffee and listened to the now awakening Lear's Macaws. Two by two they passed us in the subdued dawn light, possibly twenty birds flew past. As the sun came up the incredible landscape of rusty arid sandstone came into view. A large Cactus was a great staging post for a pair of Macaws to perch and preen. 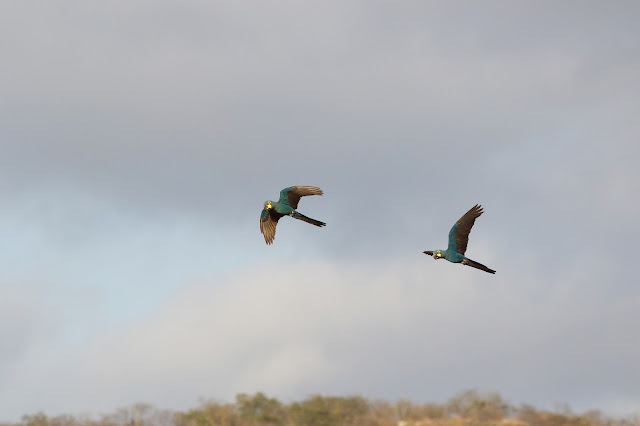 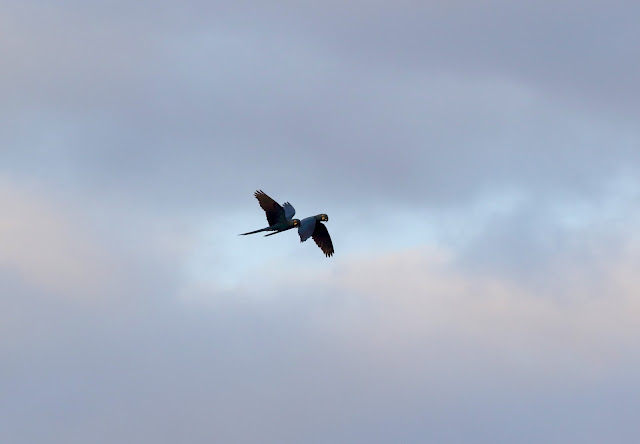 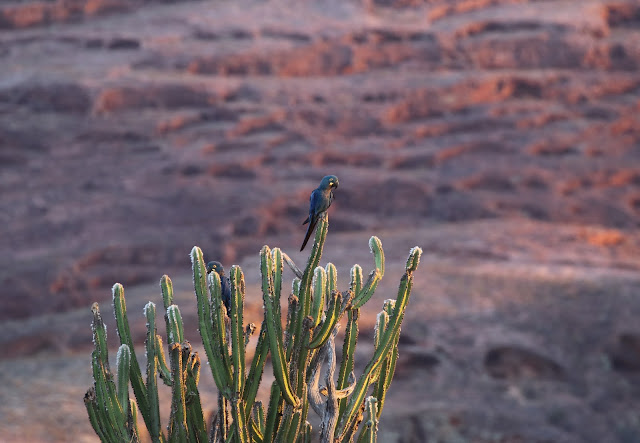 Others flew overhead and perched in bushes, 20, 30, possibly more, a thrill to see. Blue Crowned Parakeets unfortunately weren't going to steel the limelight as they flew past and a Laughing Falcon called from somewhere over there. As the sun came up, we headed a short walk to a canyon where the birds breed in the rock face. A few birds favoured a distant ledge to roost upon while most of the birds flew overhead and probably onto feeding grounds. However a single pair of Lear's Macaws were tempted to land at their nest site but a Black-chested Buzzard-Eagle had been soaring in the area making them nervous, they made half a dozen attempts to come in but aborted each one. In the meantime Jeff had noticed a Bat Falcon that had landed on a stone ledge close to where we were watching the Macaws from. It had caught a bat that was partially eaten. Great photo opportunities and stunning close up views of a stunning small falcon.
Bat Falcon 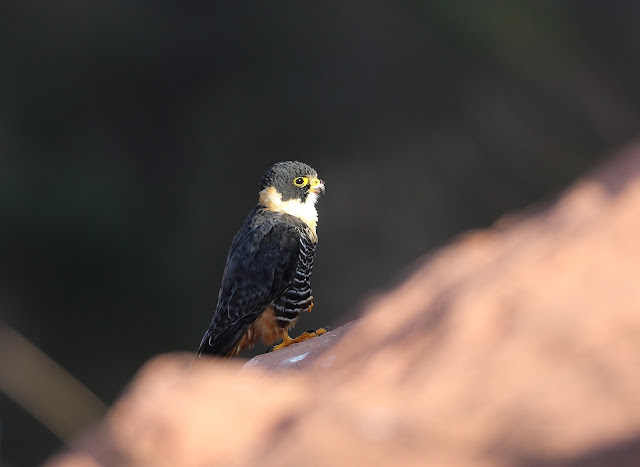 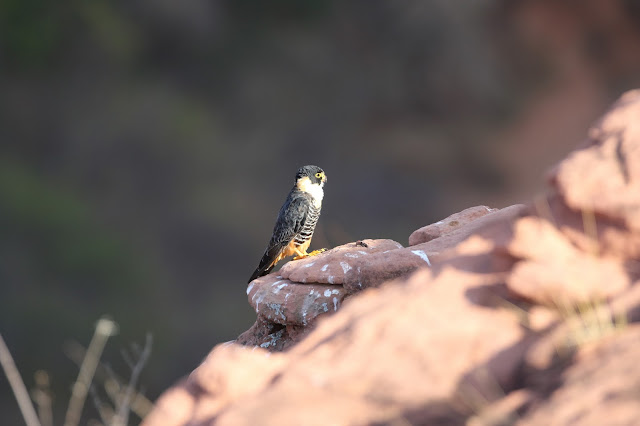 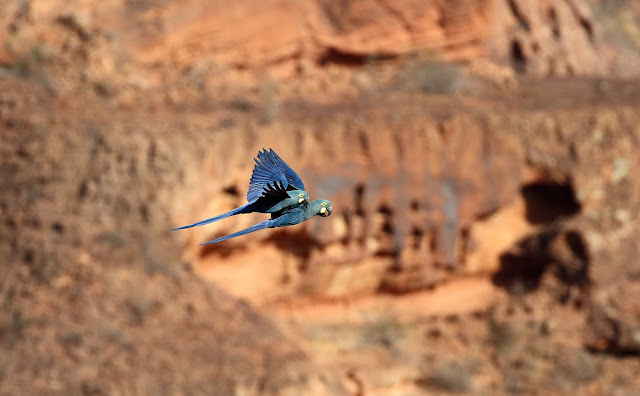 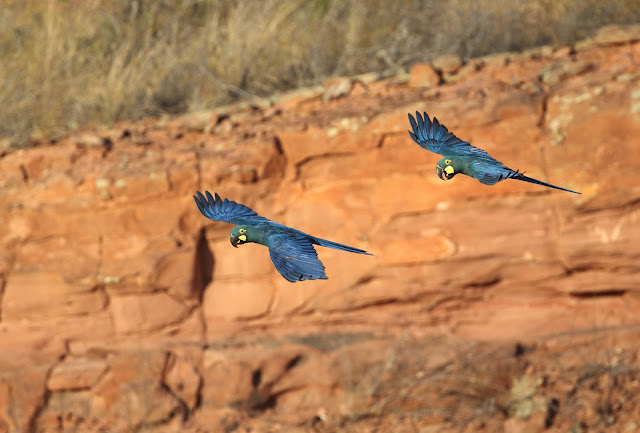 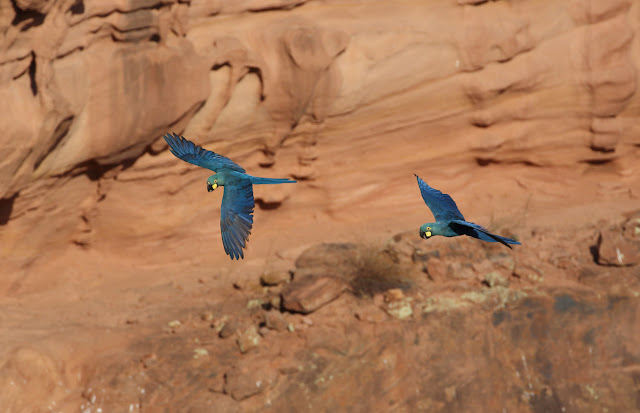 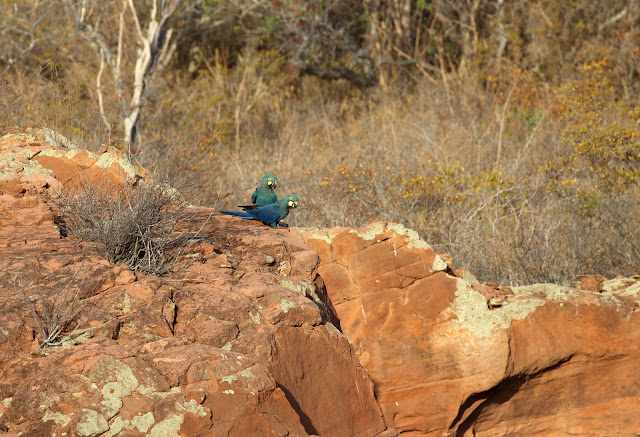 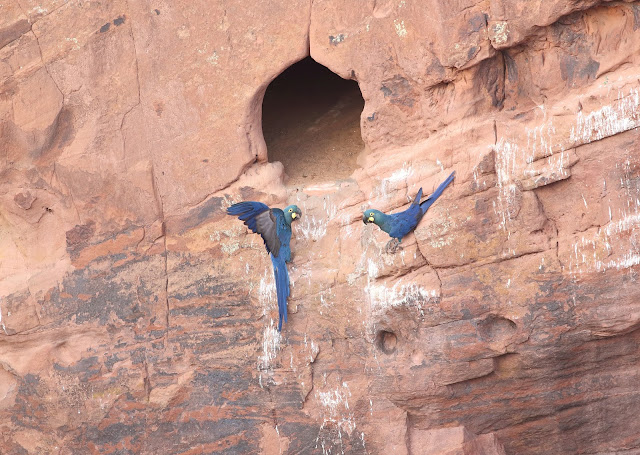 ﻿
﻿
A Crane Hawk and Turkey Vulture flew past the site alas it wasn't a King Vulture. We tried a King Vulture roosting site close-by but to no avail.

As we left the site we picked up a Cliff Flycatcher and Lesser Wagtail-tyrant.

It had been a superb morning in a fascinating landscape and with a truly wonderful species of bird and one of those moments where the bird, the location and the precarious existence of this bird make you realise that what you have just witnessed is incredibly special and not to be taken for granted. . 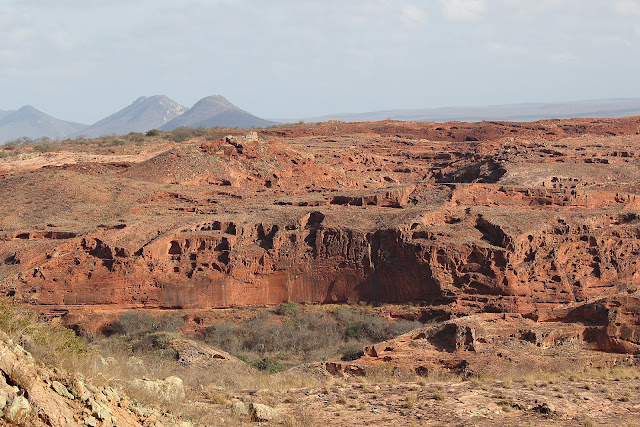 We now have a long drive ahead of us as we head to the "hippy" town of Lencois where we will be visiting the Chapada Diamantina mountain range.

Cheers Liz, I certainly think you made a good choice there.

Bat Falcon & Macaws are my favourites!