This years tour takes Bananafishbones & travelling companion Jeff, to the NE Corner of Brazil for some serious endemic birding. The itinerary should also enable us to hopefully see some of the worlds most critically endangered species.

We planned to fly into Fortaleza on Friday morning 3rd March and meet up with our guide Ciro Albano from the NE Brazil Birding Co.

The basic site itinerary was as follows:

We would fly out of Salvador on 18th March and head back to the UK.

Well lets get the shit out of the way first off. We arrived at Rio de janeiro airport at .6.30am on Friday 3rd March and by 07.00am I had been robbed of all my hand luggage, including Camera, all accessories, Binoculars, Cash and everything else in there apart from my Passport. I wont dwell on it now, but lets hope the scumbag is dying a slow, painful and horrible death..... Enough said.

We continued to Fortaleza and met up with Ciro Albano who would guide us for the next 15 days across the vast NE corner of Brazil. Ciro loaned me a spare pair of his Binoculars so at least I could get birding straight away. Ciro made a very late change to the itinerary as a Buff Fronted Owl had been located only a few hours away at Sorbal and had been showing for a couple of nights, it would also add a couple of possible Endemics to the trip target list. We arrived in Sorbal with an hour of daylight left which gave us just enough time to meet up with a local birdwatcher and try for a Hooded Gnateater. The location of the Owl would need permission as it had taken up residence in a wooded area inside a couple of adjoining gardens. A drive down a narrow track and through farmland and tiny villages we headed for the Gnateater, picking up some common species along the way. Snail Kite, Roadside Hawk and a few Savanna Hawks as well as the easy Herons, Snowy, Cattle and Great Egrets, add a whole load of Black and Turkey Vultures we had pretty well mopped up the local species in an afternoon. It always amazes me when in South America how abundant the birdlife is virtually everywhere, yes these are common species, but they are easy to see and often in good numbers. Driving down the narrow track I even managed a lifer with a Masked Water-Tyrant, a species that I would quickly understand are also fairly common in most locations. We arrived at a tiny village where our local guide seemed to get permission to allow us to park up and walk up a small hill. Within a few minutes we were onto a rather smart male Hooded Gnateater. Stunning views, alas no camera! then a female appears and almost mocks me by perching totally out in the open. We had just enough time to bag a few more lifers with an endemic Caatinga Antshrike, another lifer with a large flock of the smart Biscutate Swift. It was now dusk and our local guide was armed with a set of keys that allowed us into one of the gardens. We would wait for the owl, and wait, and wait. We decided to venture up the road, again we waited. After a further Ciro decided to try another location that has produced the Owl in the past, a short drive and another lengthy wait disappointed. We decided  on a last desperate try back at the garden where we would give it a last quarter of an hour. Immediately we were onto its call, and this time it was in the neighbouring garden. A spot lighted sighting of it perched and then it was gone.... into the next door garden. Try as we might we didn't get another view. Hard work this one but a prized Owl in the bag on the first night. Try as I might I cant remember anything else about this first full day in Brazil, I spent the night restlessly and thinking too much about the ifs, buts, and maybes of being robbed of all your trip belongings...... Tomrrow we try for a Moustached Woodcreeper before travelling back to Fortaleza to pick up a spare Camera and Lens that Ciro kindly loaned me for the rest of the trip.

Saturday morning we arrived at the area that would hopefully produce a Moustached Woodcreeper , alas the road was waterlogged and impassable, whilst the guides tried to figure a way round we managed to pick up a Striated Heron, Greater Ani, Limpkin, a few endemic Spot-backed Puffbirds, Straight-billed Woodcreeper and a few Caatinga Cacholote.

Plan B - We drove to another site for the Moustached Woodcreeper and gave it as long as we dared before we had to make tracks to Fortaleza and then 230km to Guaramiranga. Again whilst searching for the elusive Woodcreeper we had fantastic views of a Ferruginous Pygmy-Owl which of course with its presence made sure any birds in the area were flushed and allowed great views, these included a pair of endemic Ochraceous Piculets, Crested Becards that had a nest too close for comfort of the Owl, Lined Seedeater and a host of other common species. So having dipped the Woodcreeper we dropped off the local guide and made tracks. We picked up a camera and headed off to the Serra de Baturite mountain range. We would arrive mid afternoon with squally showers, dropped the cases and were birding for the last few hours of light.

We took to the forest in front of our accomodation and didnt reaaly have to venture too far to see stunning, Rare or endemic species such as Ceara Gnateater, Great Antshrike, Grey-headed Spinetail as well as a host of Tanager species including Guira and Burnished Buff Tanagers which are generally common but always lovely to see.  The bird of the afternoon was probably the Pearly-breasted Cuckoo that after a long search we actually found in the tree next to the reception while we were enjoying a coffee! Pale Legged and Band-Winged Hornero`s and Yellow Chevroned Parrakeets were easy sightings in the reception car park, as was a single Planalto Hermit. 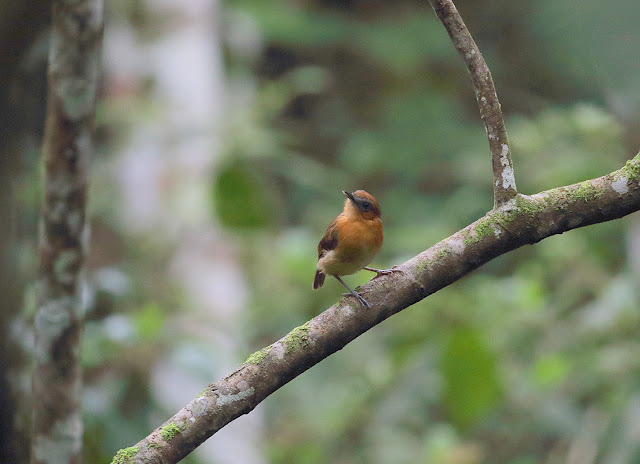 a pair of Pale-legged Hornero 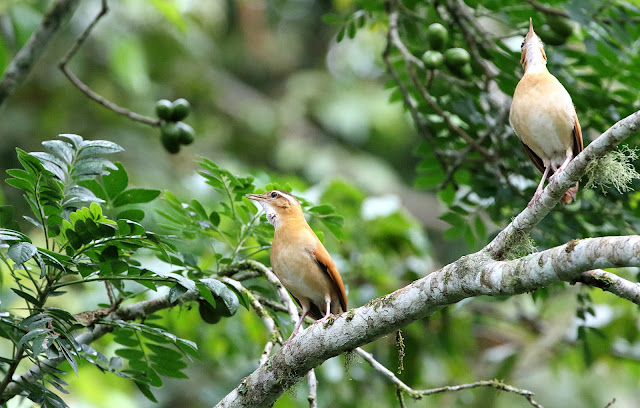 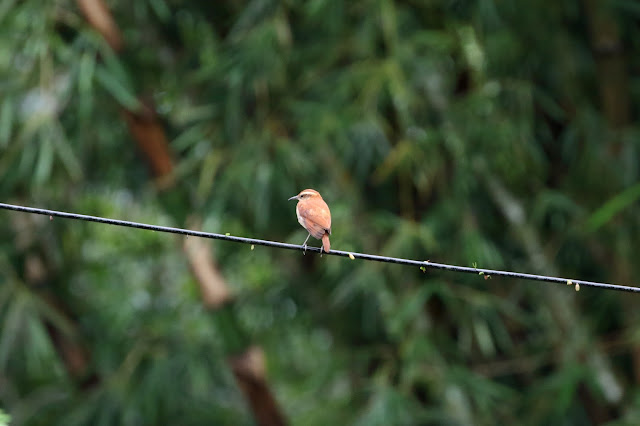 That's a bloody rotten thing to happen. I hope you have managed to get it sorted out.

Cheers Simon. Its a wee bit complicated, but have currently managed to be reimbursed for about 60%

I hope you have managed to get it sorted out.

Sorry to read this, Dave. Same thing happened to us at Barcelona Airport two years ago, just a couple of months after we moved to Spain.