The previous afternoon we had done a patch of forest that allowed us to get a couple of rarities with the Slender Antbird and Narrow-billed Antwren we woke this morning and still had a full day and a half birding here so were able to get fairly comfortable in our surroundings. We were staying in the small town of Boa Nova and would travel the very short distance to the Parque Nacional de Boa Nova for some serious forest birding. Still no Stygian Owl outside the Pousada, and we were met with a fair bit of gloom and drizzle. We had a whole load of targets here with some very range restricted species in the lush Atlantic forest. 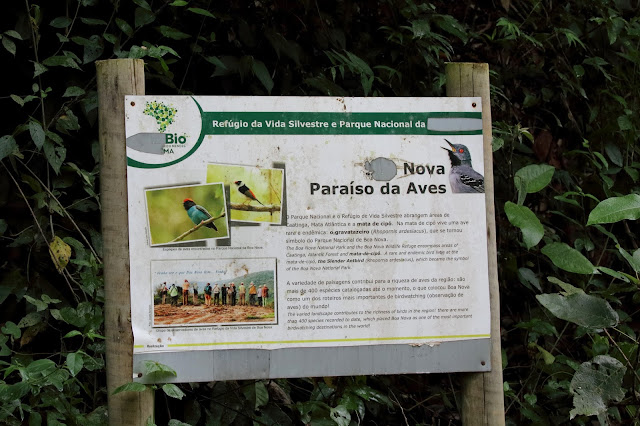 ﻿
We were to do well during this trip for Hermit species and this morning was no different as we added a new one and another lifer to the trip list with a Scale-throated Hermit. We birded for a short while with umbrellas, mainly to keep the optics dry and we were going to spend the next hour or so looking down rather than up as we had a bit of an Antbird fest!

We parked up along a track and immediately had the backdrop of a Least Pygmy-Owl calling. We didn't try too hard but couldn't locate it immediately but it was never far away for the next few hours whilst we searched for the target species of the this area. First up was a Striated Softtail, what a little stunner of a bird and in the deepest vegetation alongside the softtail were a Variable Antshrike,  Rio de janeiro Antbird, and a Bahia Spinetail. I didn't even bother with the camera as the drizzle continues and the light was rather poor anyway, but we saw enough of the birds to continue along the track in search of the rest of the targets, but in hindsight I wish I had tried to capture the Striated Softtail on camera..... however I like this species that much I have been granted permission from my guide to use an image from his collection. So here it is Thank You Ciro Albano....... 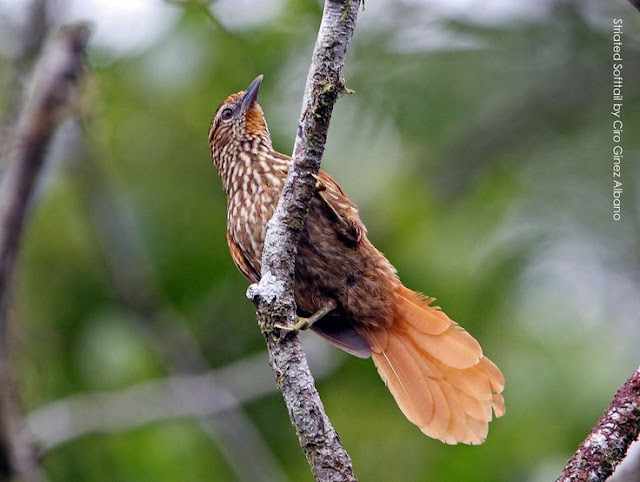 We spent the whole of the morning along this track and with the various Flycatchers not listed here we picked up 60+ species along this stretch of track alone. A few common species (for instance Blue Dacnis, Sayaca Tanagers et al followed us around NE Brazil for the whole trip), some weren't lifers for me such as Scaled Pigeon, Yellow-green Grosbeak, Versicoloured Emerald, Hook-billed Kite, the five Channel Billed Toucans that perched high in the canopy, or the White-bearded Manakin, but dozens more species certainly were lifers and we eventually caught up and got good views of the Least Pygmy-owl from early this morning. 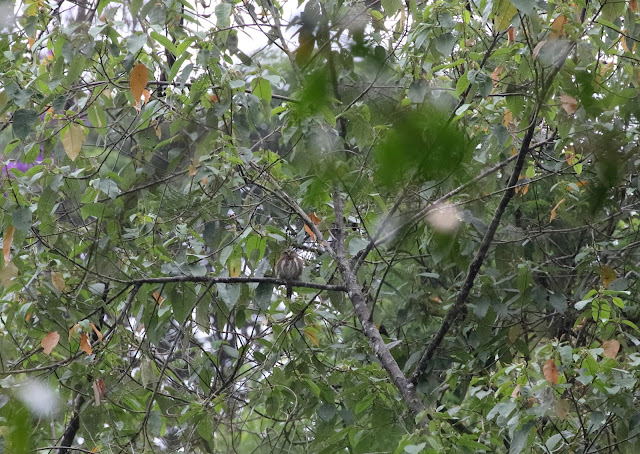 Yellow-lored Tody-flycatcher, Red-crowned Ant-tanager, a single Red-ruffed Fruitcrow that Ciro managed to find using the scope, Fork-tailed Pygmy-tyrant, at least a couple of Long-tailed Tyrants, Yellow-throated Woodpecker, Sooty Grassquit, Scalled Woodcreeper, White-eyed Foliage-gleaner unfortunately we missed the  endemic White-collared Foliage-gleaner, Violacious Euphonia, Ochre-faced Tody-tyrant, Spot-backed Antshrike, Yellow-olive Flycatcher, Brazilian Tanager, Syrstes, Blue Manakin,, this time the male, Black necked Aracri, our fourth species of Piculet of the tour with a close view of the Golden spangled Piculet, Grey-headed Atilla, my first ever of this family, Rufous Hornero, that cleaned up the Hornero family, at last an image of the Caatinga Chachalote, we had seen plenty in Sorbal a week or so ago but never got the chance to photograph them, Ferruginous Antbird. 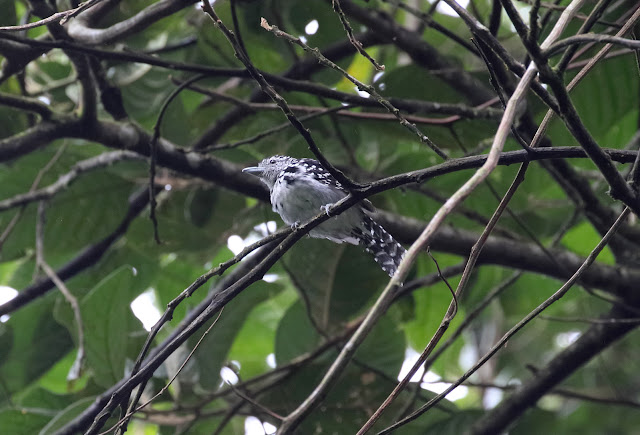 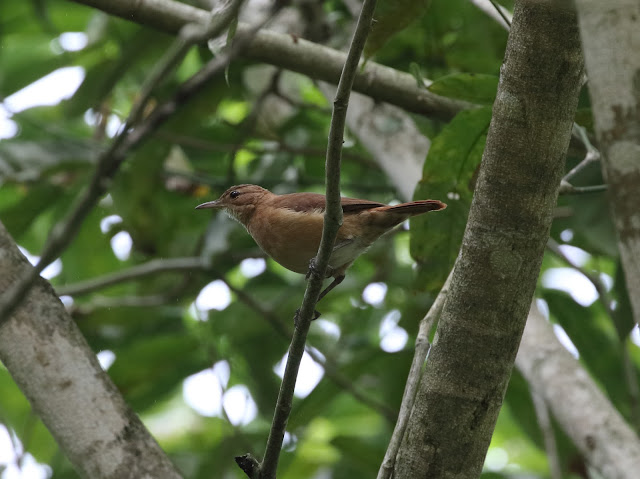 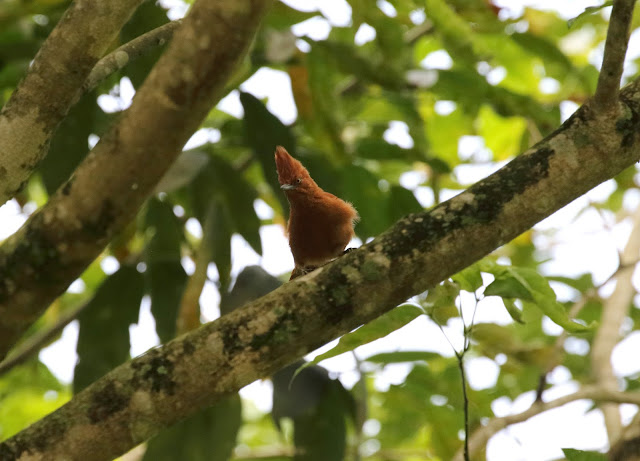 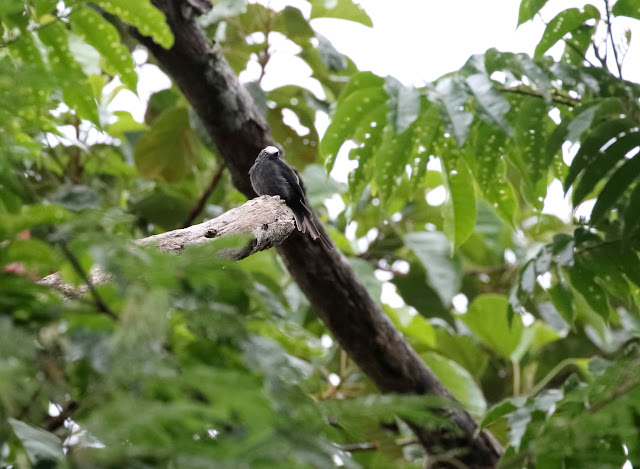 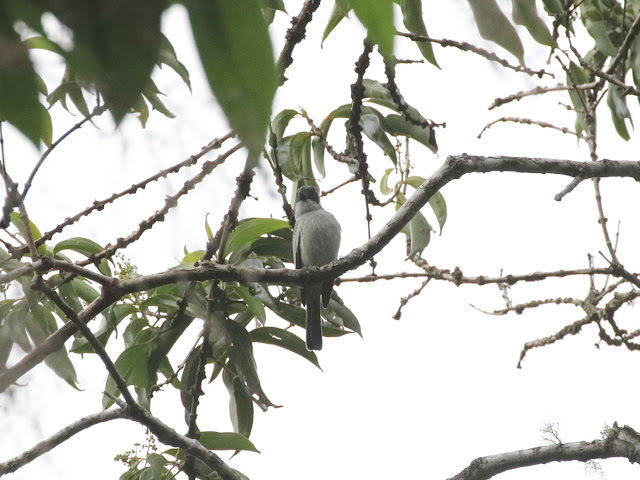 ﻿
In terms of birding it had been a brilliant morning, but the early drizzle and cloud had meant that it had been a disappointing morning for photography. To compound matters after a little perseverance we eventually got great views of a Short-tailed Streamcreeper, I got two images, one soft and one sharp, I deleted the sharp one.... oops.

Boa Nova along the track 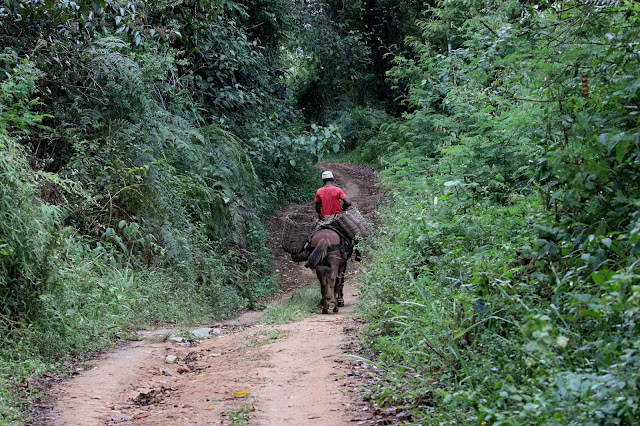 The sun eventually came out as Ciro gave us a lesson on Dubois Seedeater vs Yellow-bellied Seedeater identification as he tracked one down for us and at long last the sun shone on a rather smart Crescent Chested Puffbird, 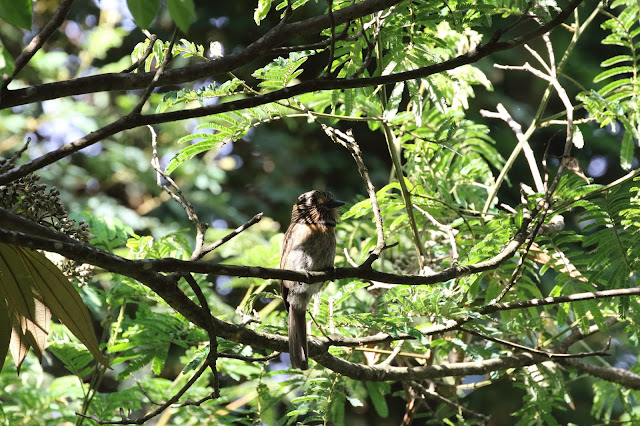 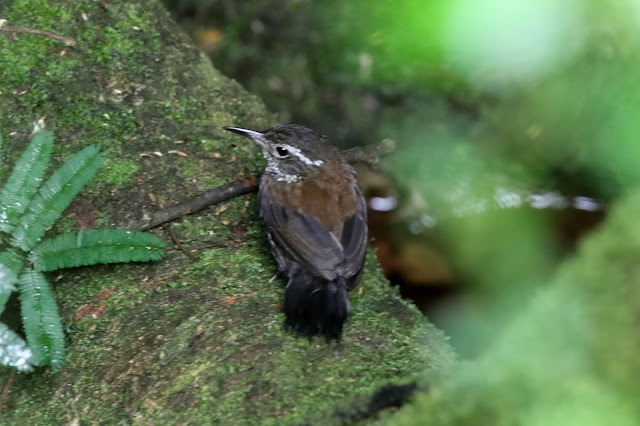 After lunch and a bit of mooching around the town we drove to a new area for this afternoons birding, we would then finish off the day trying for a Giant Snipe.  It was slow going in the now searing heat which meant that we  didn't pick up too many new species but still managed a pair of Pallid Spinetail, White-throated Spadebill, Tufted Antshrike, and it was a real shame that the Pin-tailed Manakin was a female and not the stunning male. A fair amount of time was dedicated to looking for the Black-billed Sythbill, it took forever to find and meant visiting and stopping at plenty of locations, we got it but it was a bloody hard bird to track down.... others of note were an only sighting of the trip of a White-tailed Kite, it had been a good day for Kites as this was out third species, while Chillean Eleania seemed to be the default bird of the afternoon. 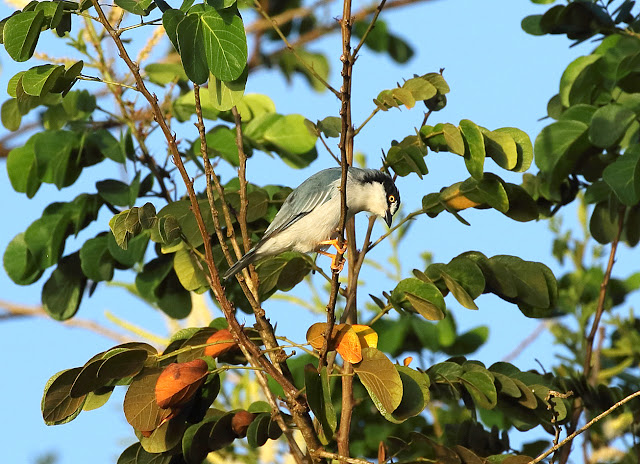 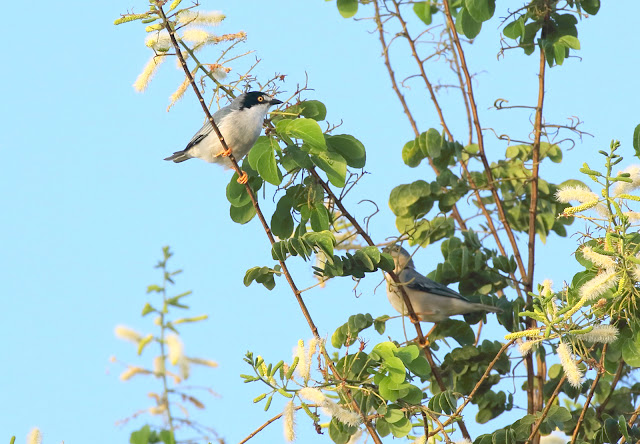 ﻿
We headed off to a small patch of bogland on the edge of the forest, with a little light left we managed a Wedge-tailed Grassfinch just as the heavens opened and boy did it rain. We had a Ash-Throated Crake calling close by but never saw it and we missed the Giant Snipe which turned out to be one of the misses of the tour. Half a dozen Common Paraque on the way back to town couldn't raise the spirits. Having said that, it had been an epic days birding with eight or more regional endemics seen.

Tomorrow we travel an hour or so to meet a young lad and bird on his patch looking for a rather special bird that was thought to have been extinct..... that was until he rediscovered it a few years ago. Next day travel to meet Matheus.
Posted by Dave at 17:14