This morning we would have a leisurely breakfast before heading to Potengi, we enjoyed a little lie in where Ross (who we had bumped into the night before) had set of extremely early to try for the White-browed Guans that we saw at Serra de Baturite before dawn, he would also try later on for the Moustached Woodcreeper at Sorbal that we had already missed.

A quick walk around the area allowed me to see the biggest flock yet of the noisy Cactus Parakeets which landed a short distance behind the pool, whist a Grey-necked Wood-rail called out from the reeds. Variegated and Streaked Flycatchers posed for photos but unfortunately the Blue-winged Parrotlets didn't. The resident family of three Pygmy Nightjars had survived the nights tropical downpour and were warming themselves in the sun, before the first trip sighting of a Shiny Cowbird brought me back down to earth with a dose of the mundane! ...... I am currently sat here in the UK wishing to now see a Shiny Cowbird. 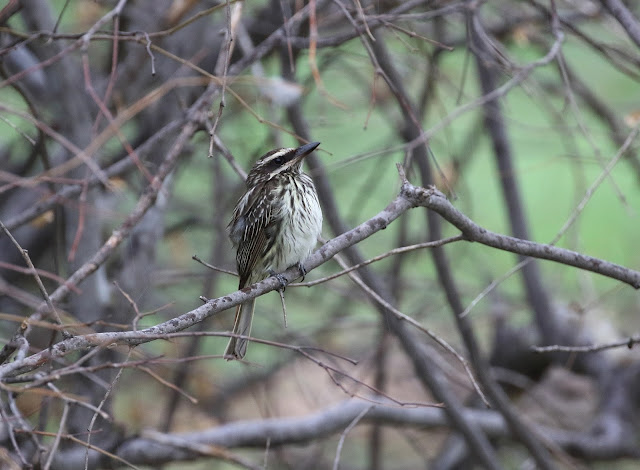 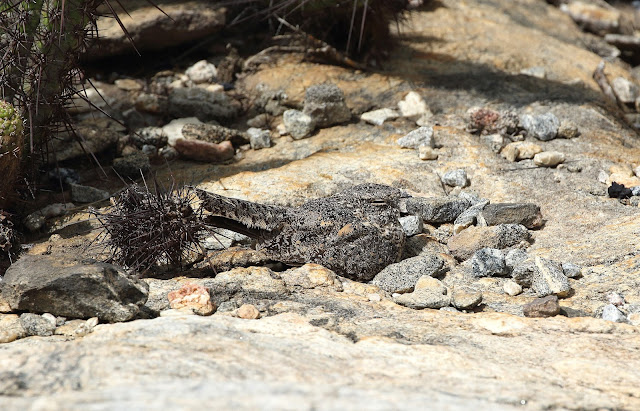 Other nice birds close-by were a Green-barred Woodpecker and an Ochre Backed Woodpecker that flew off before the camera was to hand, but it gave super views in the sun rather than the previous sighting in the Baturite gloom and drizzle of a few days ago. The pair of Crested Becards were still on sentry duty outside their nest and a Golden-Green Woodpecker was the last new bird before we had to leave. We picked up plenty of Spot-backed Puffbirds as we left the reserve. 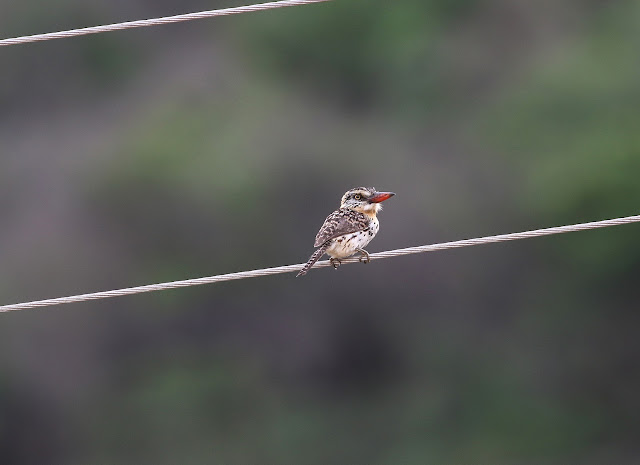 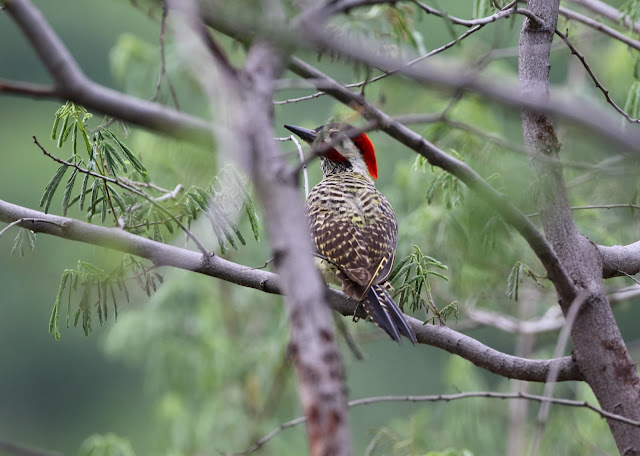 As we drove to Potengi we stopped suddenly as Ciro spotted a couple of Red-legged Seriema in a field, one strode off quickly but the other stayed around long enough to get the camera out of the window. Great bird..... we also had our only sighting of the trip of a single Ringed Kingfisher. 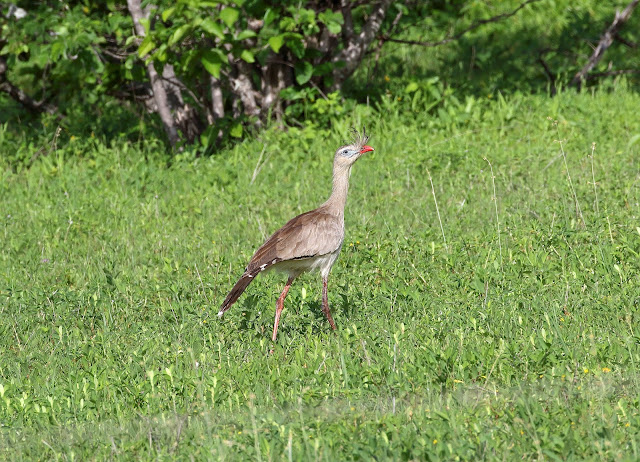 We arrived at Potengi and booked into the comfortable Pousada Menos Paga and quickly travelled on to meet a local guide Jefferson Bob. After a hearty lunch at his home, we drove to his patch at the Sitio Pau Preto area. A host of Caatinga speciality birds were here so we eagerly set off into dry farmland and bush. Even the most common of species such as White Monjita and Rufous -fronted Thornbirds were new for me so right from the very start I knew this was going to be a good afternoon of birding. The endemic White-throated Seedeater and handsome Copper Seedeaters mixed in with the Grassland yellow-finchs and White Monjitas along the trackside and dry stubbly fields, and yet more Burrowing Owls sat on the barbed wire fence posts along the tracks. Bob has a site for the wonderfully named migratory species, White-naped Xenopsaris, I was hoping our timing was right to get us onto this smart bird. Sure enough a pair of males flitted between a thorny bush and a wire fence, my first sighting of the Chalk-browed Mockingbirds (I had missed the ones whilst travelling and sat in the back seat.... ditto for Guira Cuckoos) were also added to the ever growing life list. 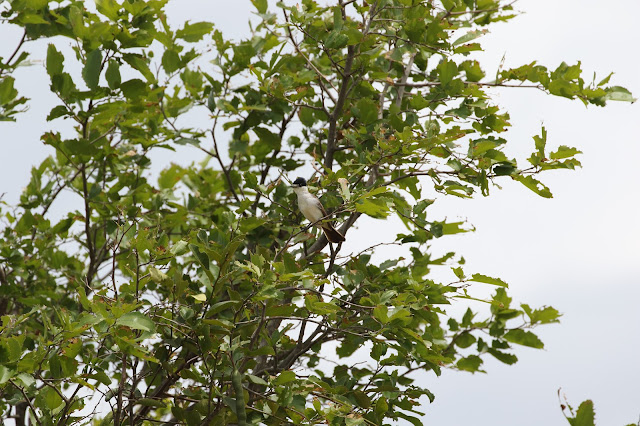 We continued along the track and parked up, the heat was fairly oppressive but we had no need to worry as we didn't venture more than fifty yards from the car and the birding became red hot. First off, an Ultramarine Grosbeak was giving good views as I tracked it around with the camera but we were distracted by a small mixed flock which held both Lesser Wagtail-tyrants and a Greater Wagtail-tyrant, Orange-headed Tanager, Southern Scrub-flycatcher, Tawny-crowned Pygmy-tyrant and Southern Beardless Tyrannulet (the only non-lifer in the mixed flock). Most of these species are fairly common, but that 20 minutes or so gave me a host of new birds and we hadn't really done any walking yet. Further up the dry track a pair of Stripe-backed Antbirds gave us superb photo and video opportunities, this is a really smart species, we could have stayed for the afternoon, but we had a date with a stunner of a hummer.
Ultramarine Grosbeak 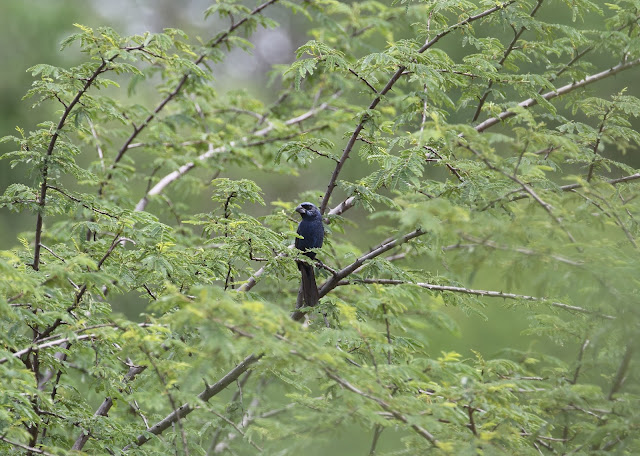 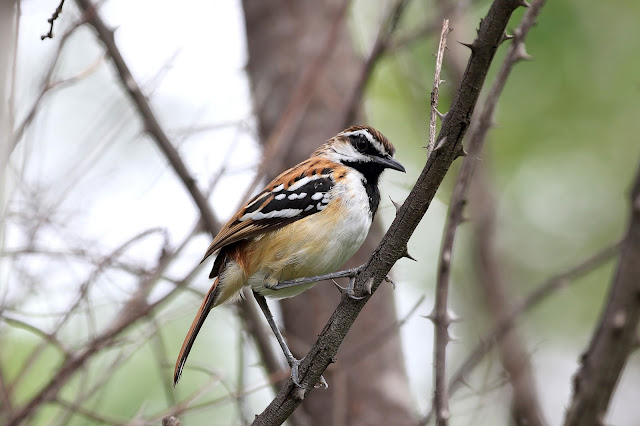 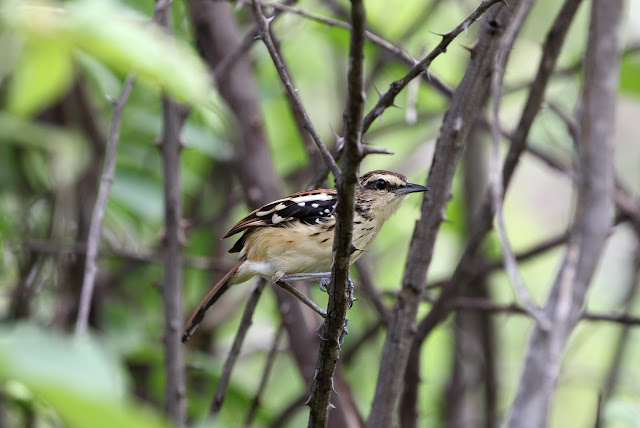 We arrived at another area of Bobs patches (pardon the pun, but we were now walking through his vegetable patch, proper garden birding.). Red-cowled Cardinals seemed to be the most abundant bird here, but Bob had a special bird feeding on some flowering plants, we had to wait a while but sure enough it didn't let us down. A stunning Ruby-topaz Hummingbird initially teased us with fleeting visits where it seemed to feed at the rear of the plants giving good views but zero chance of photos. Glittering Bellied Emeralds and a single Swallow-tailed Hummingbird made more frequent visits and fed on our side of the plants, the Swallow-tail Hummingbird can be a very territorial species and often chases every other hummingbird away, so maybe that is why it was only making fleeting visits, or was it the ever calling Ferruginous Pygmy-Owl that was perched high in the tree above us. Whatever it was, things changed and it made more frequent visits and allowed some photo opportunities..... (not sure I fully seized the opportunity though and never did quite nail that shot!). Again this was species that we could have easily stayed longer but we had another area to explore, as we left the veg patch we passed a pair of Little Woodpeckers, a Zone-tailed Hawk passed low overhead and a young Campo Troupial foraged in a hedge close to the car. 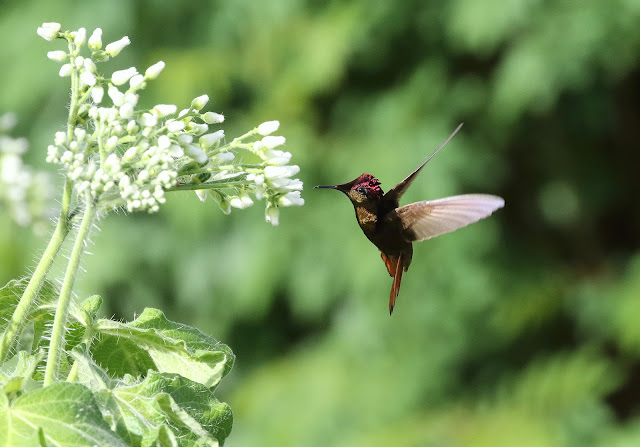 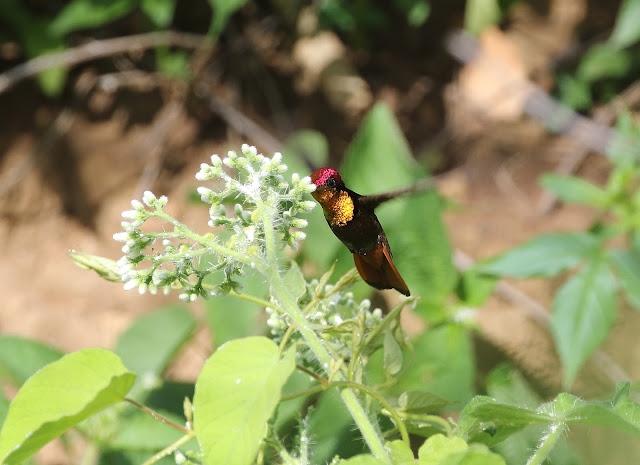 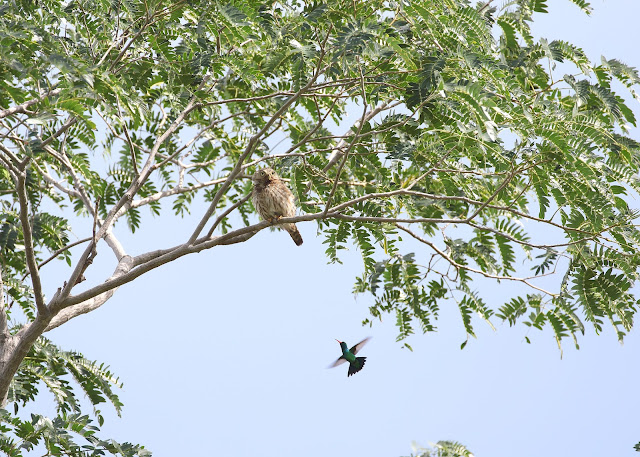 ﻿
The main Target at the last location of the day was the Great Xenops. Ciro had already warned that it can be a difficult bird to see so it was a relief to all when we heard one calling a soon as we parked up, and even more relieved when it showed itself only a few minutes later. Certainly an amazing looking bird and it was one of the species high on the trip target list. It wasn't the only endemic on show, a pair (particularly the male) of Silvery-cheeked Antshrikes put on a display virtually out in the open, and we managed descent views of a Red-shouldered Spinetail, a Chestnut-vented Conebill was probably the best of the rest amongst the many Tanager species, Thrushes and Eleanias. 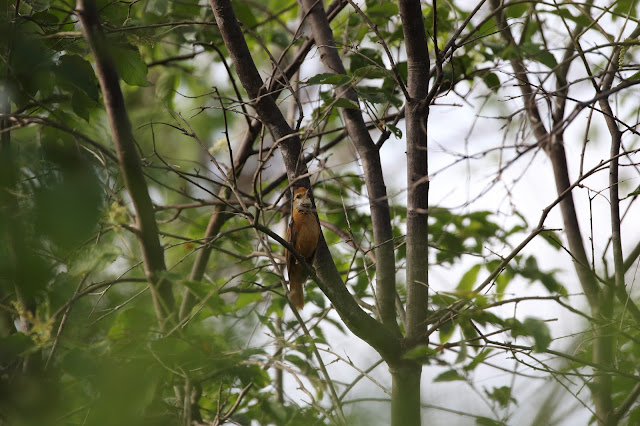 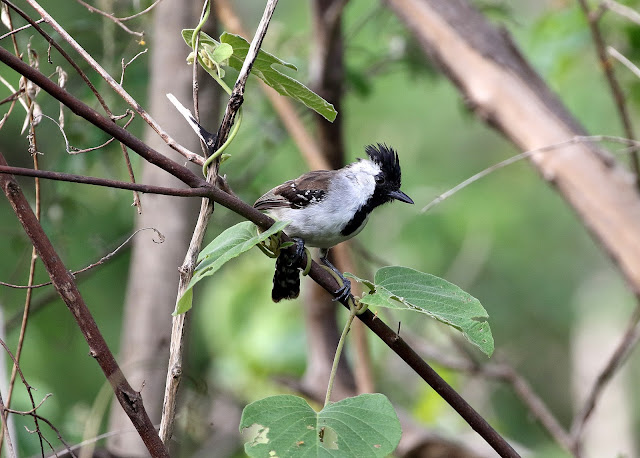 We had cleaned up on all the targets well before the light faded which allowed us some downtime for a beer before we headed back to Bobs for yet another hearty meal. Bob is currently building (with donated funds) a lodge for birders to stay whilst visiting this area and will be a great base for birding areas a little further afield. I can imagine to photo opportunities here are amazing if ou can allow the time to stay for a few days.

Tomorrow we bird locally in the morning before travelling on again.
Posted by Dave at 19:45

What a great selection of birds, Dave!

What a great selection of birds, Dave!