Two and a half days birding here so I could actually do a little unpacking at last. We were to meet Ryan who would be our guide for this leg of the trip, while Rik Rik would be our driver. Sure enough Rik Rik picked us up and we headed to the reserve at Rajah Sikatuna. Ryan was waiting. We picked up Red Jungle Fowl, Pygmy Swiftlet and Colasisi easy enough but the well renowned little pool by the kitchen block that always has the Silvery Kingfisher...... didn't! Is this an ominous sign for the days birding?
Ryan just seemed to be a little awkward, not exactly raring to go, it did seem to take a while to really get onto the trail, it was well light by the time we made a move up the Brahminy trail. We heard a White Bellied Woodpecker but couldn't locate it but we were at least onto a Philippine Trogon, albeit the female, we couldn't see any signs of a male in the area. It wasn't too long until we had the wonderful Black Faced Coucal. Two birds clumsily (arnt Coucals always like this!)  kept us company while foraging high up in the canopy. However we saw this one later on in a clearing. 
﻿
A distant Philippine Fairy Bluebird and Spangled Drongo shared the same tree for a while, Red Keeled Flowerpeckers were a little more accessible.

This  sleeping Flying Lemur or Colugo as it is known was one of the highlights of the trail. 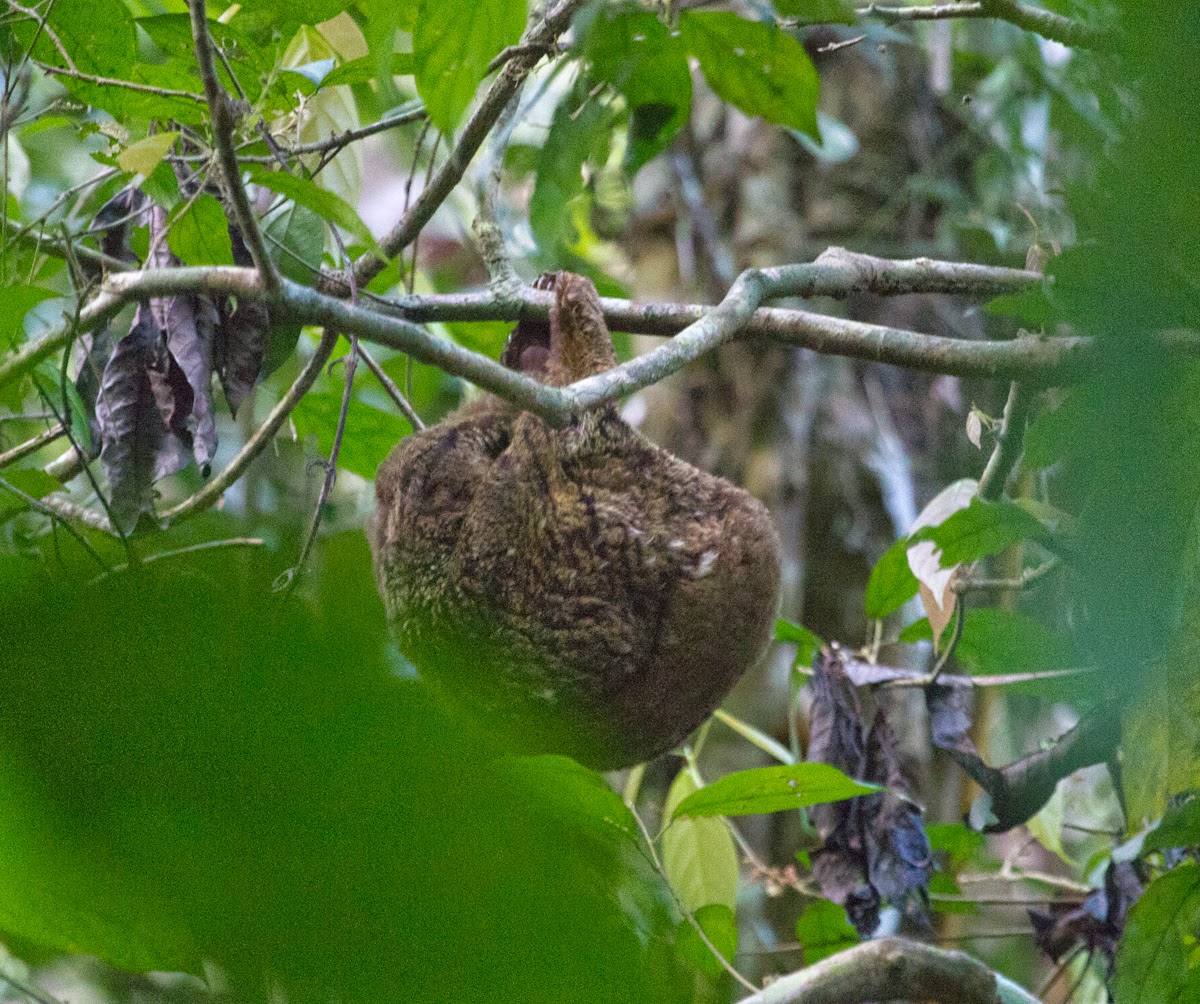 this one giving more of an idea of what they really look like.﻿ 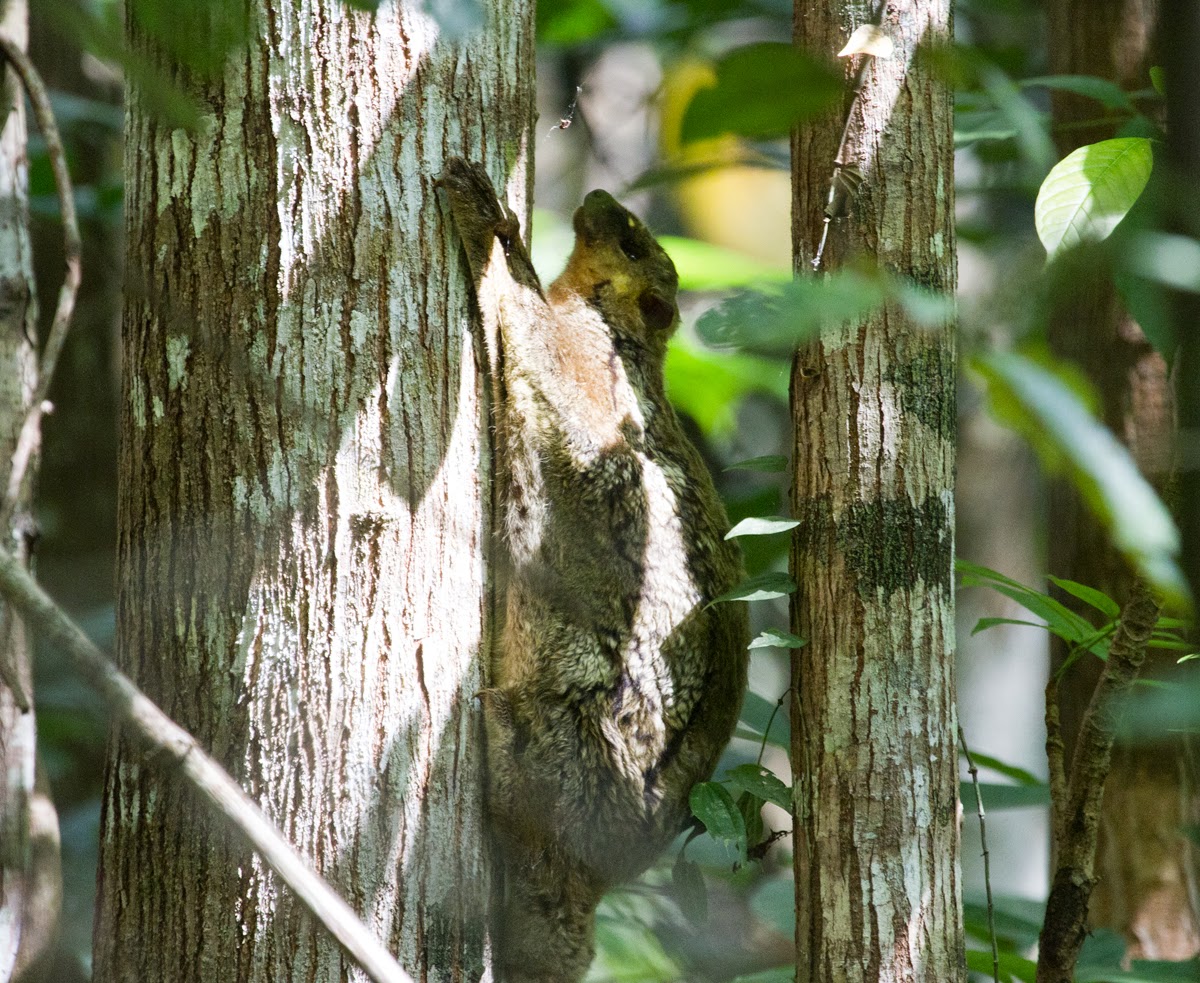 
To be honest the Brahminy trail had been really quiet. Once we finished the trail Ryan told us that he had to leave and go to work, we had booked him all day so were more than a little surprised. We were left with a driver who knew only "small birds" or "big birds" we certainly felt we had been left in the learch a little.

Anyway Ryan had given us a tip off about an Everett's Scops owl at the butterfly reserve which we easily bagged although getting an image through all the foliage was impossible, we had to be pleased with just the view. We had missed this bird on Mindanao so were very pleased to have caught up with it here. We added 2 Philippine Magpie Robins, a species we surprisingly would not see again anywhere else on the trip and more Red Keeled Flowerpeckers made up the numbers at the Butterfly Reserve, although this Bee-Nest was an interesting sight of a living mass on the outside of this tree 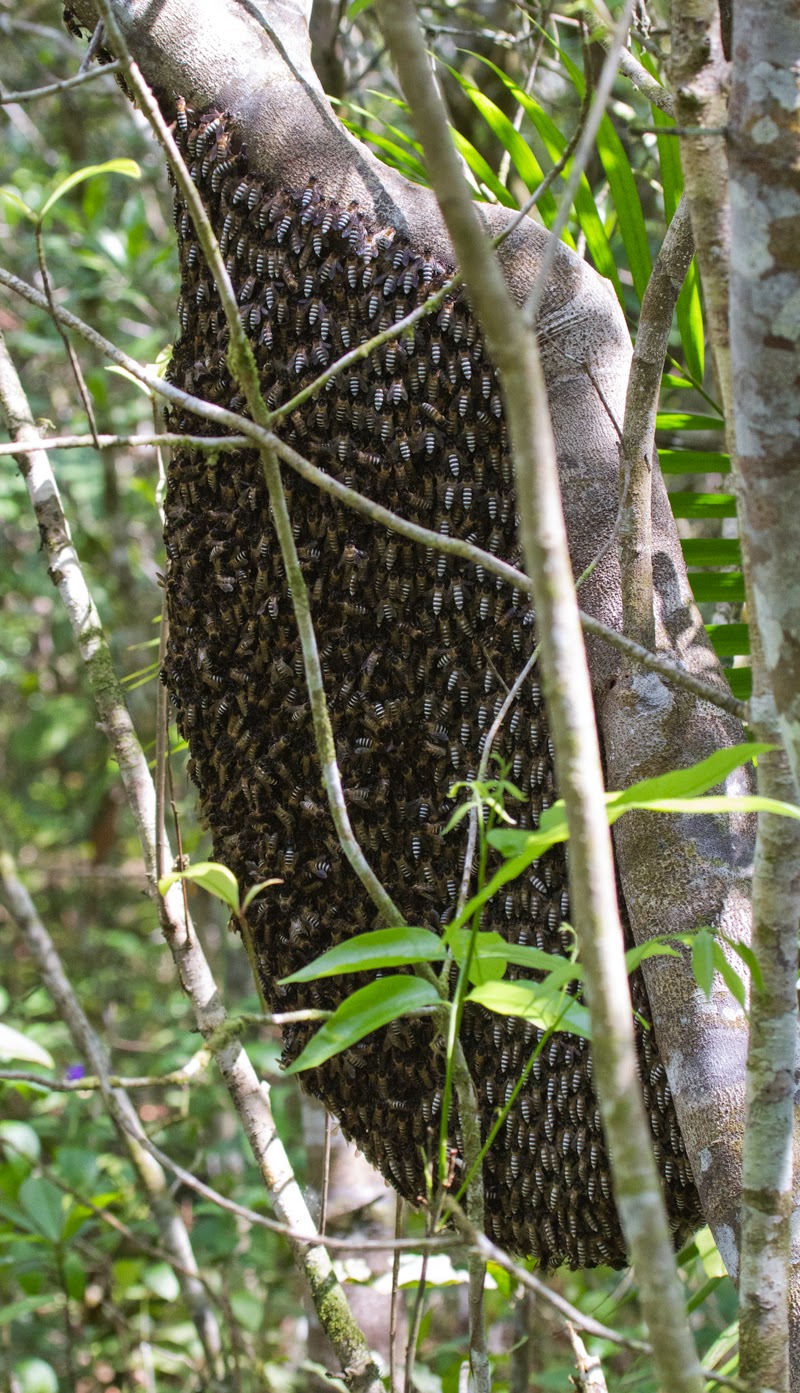 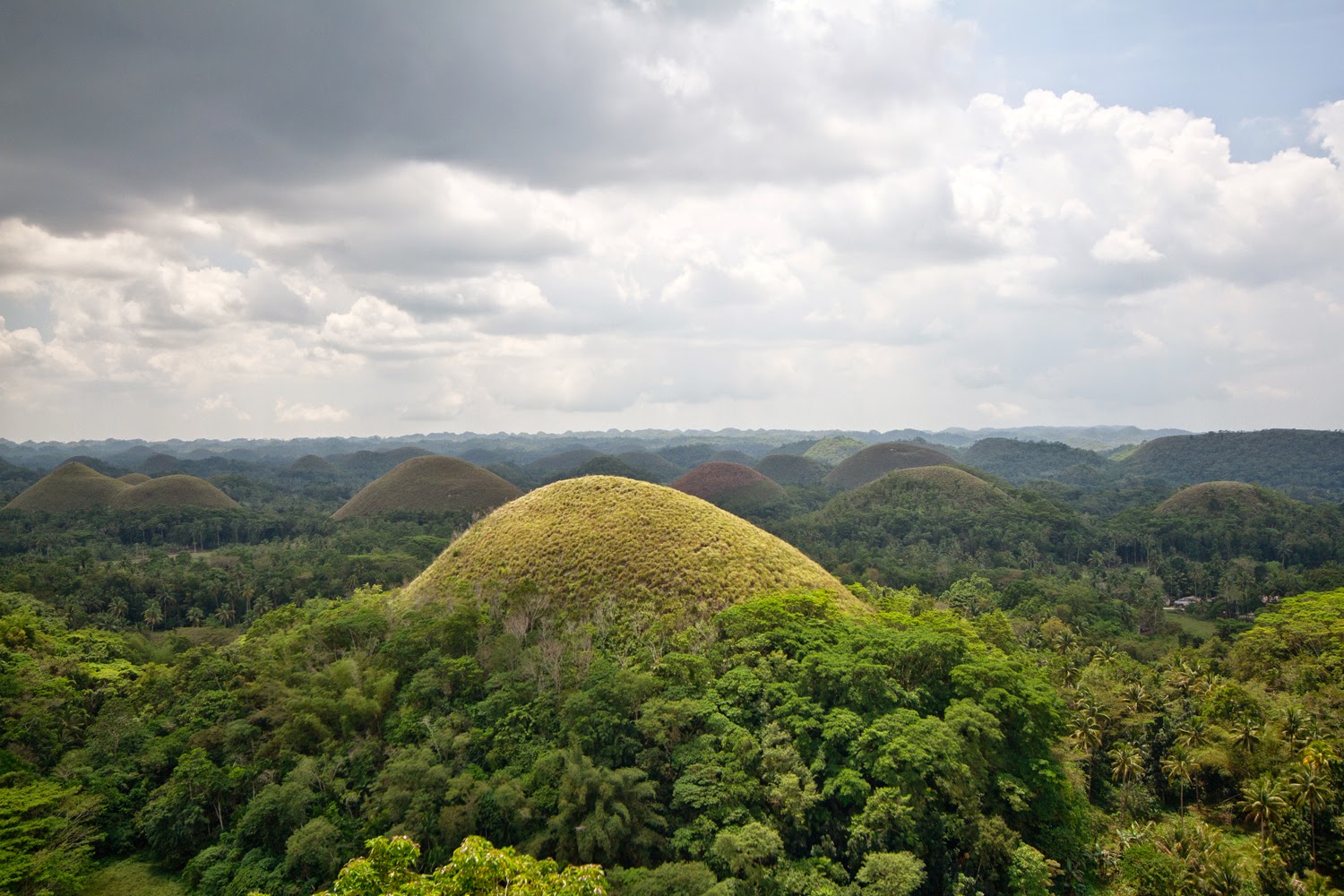 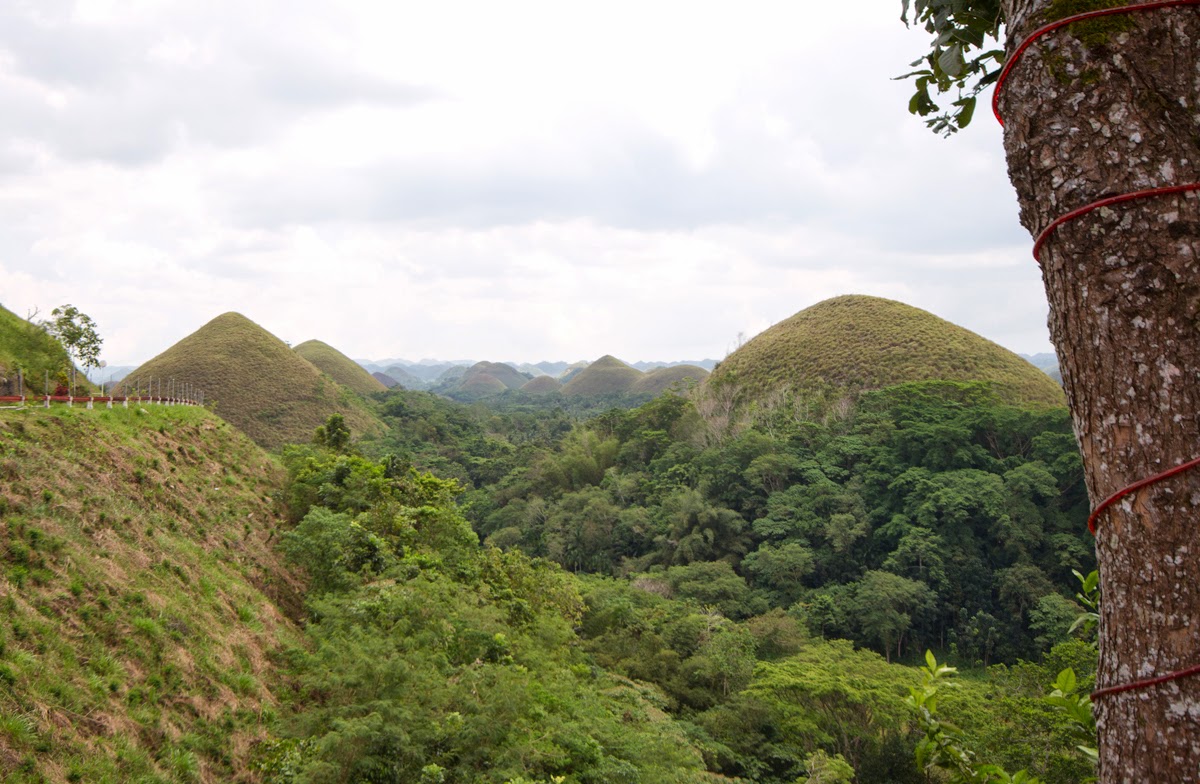 When the super Typhoon Haiyan struck the Visayan islands of the Philippines there was of course plenty of media coverage of the storm damage, however Bohol suffered an earthquake only a few weeks before. Although the island was recovering there were still plenty of structural damage that was easily seen, Chocolate Hills view point was completely destroyed and even some of the hills themselves had been damaged. A temporary view point is now in place. 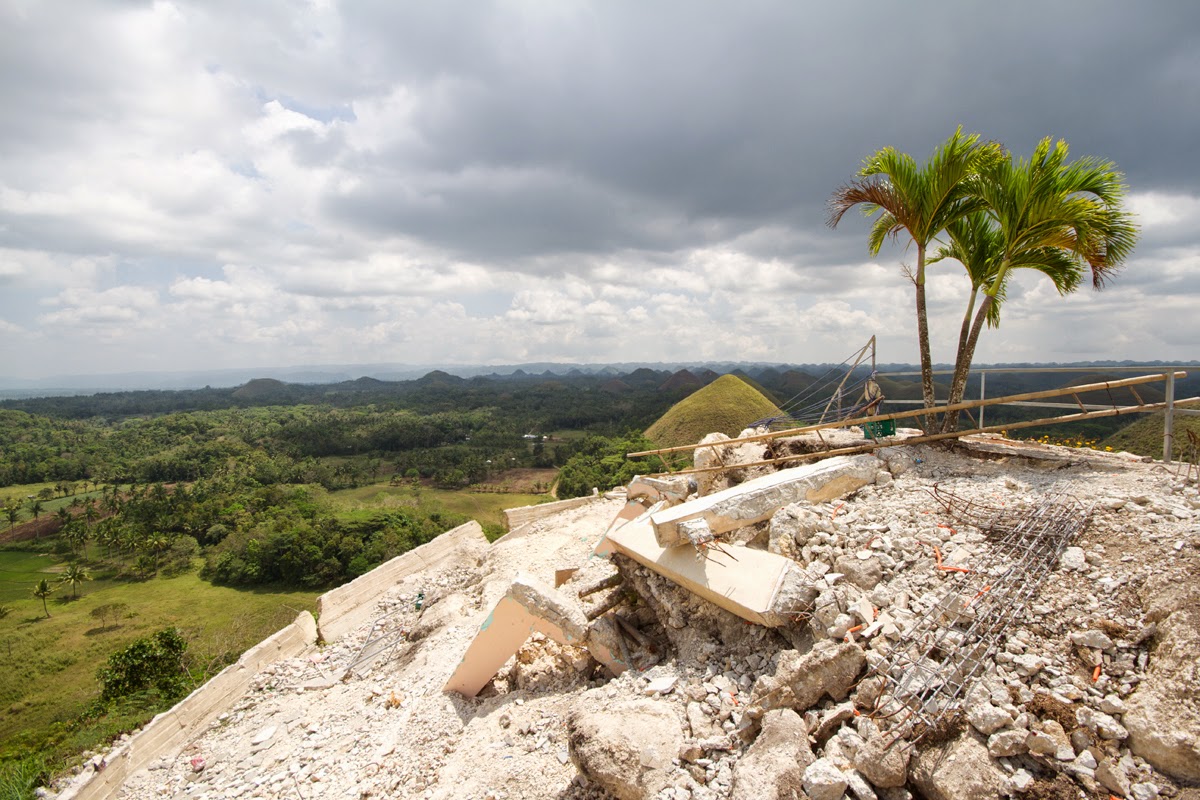 A few birds around the area were new to the trip list including Everett's White-eye and Black Naped Oriole. On the way back to our hotel we stopped off at two roadside lagoons where I got a simple life bird that has somehow evaded me over the course of the last seven years or so with a smart Marsh Sandpiper. Hopefully tomorrow Ryan will pull out all the stops!

Again we met Ryan, this time at the bottom of the Pitta trail ......  don't be fooled we did not see a Pitta!

Very much as yesterday the first bird seen was the Philippine Trogon, however this time the male. 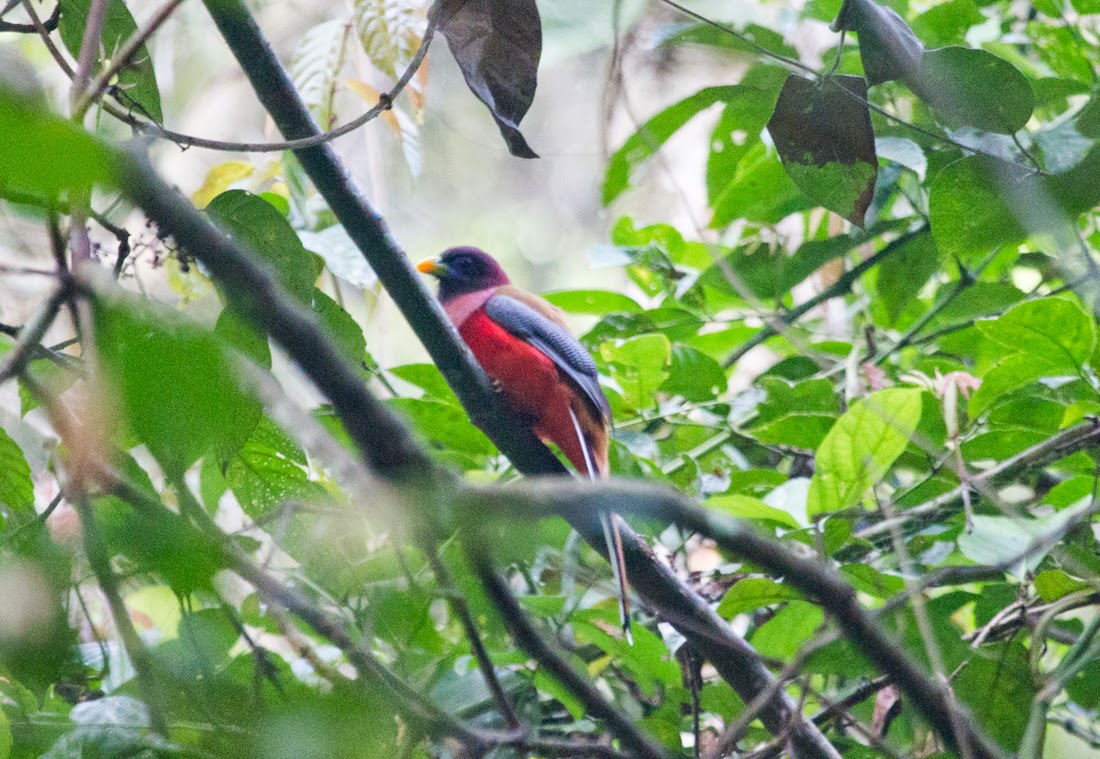 many birders will know this, but at the time of seeing this bird it was important to appreciate the moment as this would be the first and last time we saw the male of the species. Trogons are high on my list of Favourite family of birds.

We again saw the clumsy but wonderful Black Faced Coucals, and we were treated to a brilliant 5 minute with a pair of stunning (and very difficult to get onto) Yellow Breasted Tailorbirds, this experience was certainly the highlight of the morning for me. Later on in the morning we were lucky enough to find a good flowering tree that would keep us occupied for well over an hour with numerous species coming and going including White Eared Brown Dove, Colasisi, Scarlet Minivet, Yellow Bellied Whistler, Arctic Warbler, and a scarce visitor to this area Stripe Headed Rhabdornis, while just walking the rest of the trail we found Visayan Blue Fantail, Black Naped Monarch, and we got good but distant views of Samar Hornbill, and finished the trail walk with a pair of Buff Spotted Flamebacks.

The afternoon we would bird again on our own, Ryan gave us a river location nearby to try for Silvery Kingfisher. We found the river close to the Army Barracks and set off. Soon picking up Grey Streaked Flycatcher before we flushed a probable Little Heron and Rufous Night Heron. The banks of the river were quite steep  so a little difficult to see what was tucked up against this side of the bank and sure enough we flushed even more birds, this time 4 Philippine Ducks. This was another species high up on the trip list, surprisingly an endangered species. 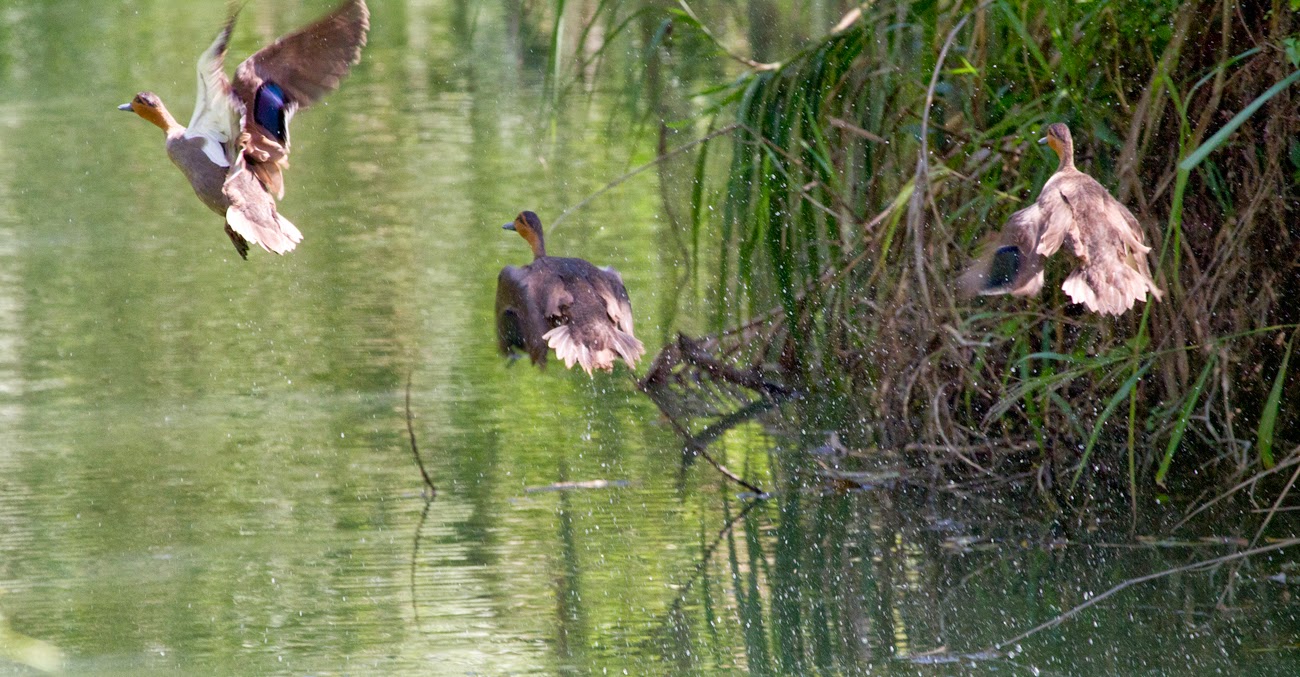 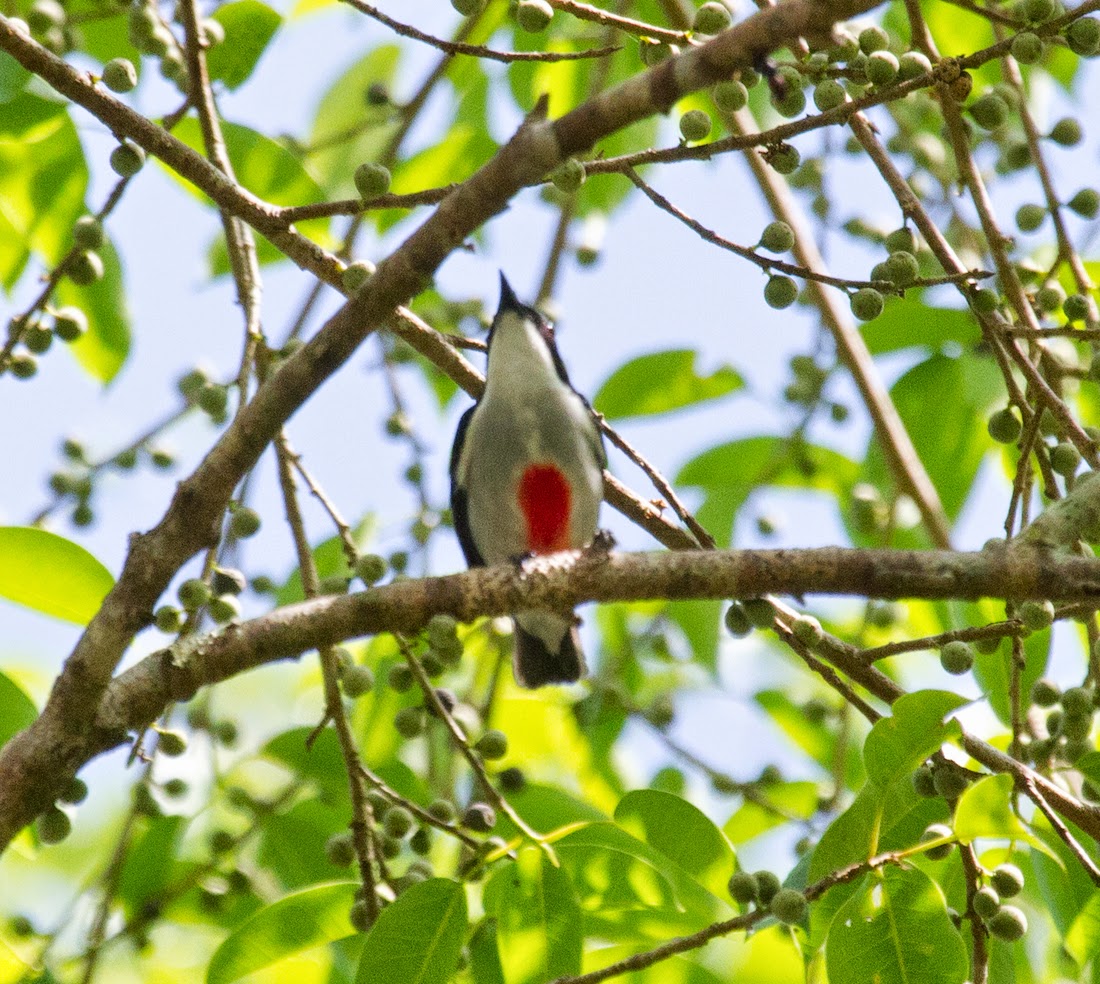 Jeff saw the Silvery Kingfisher fly up river, I missed it! he then saw it flyback down again, I missed it. and for the third and forth time. Blimey was I going to dip altogether? Nope.


A little further along and he perched up. 
and even better a little nearer 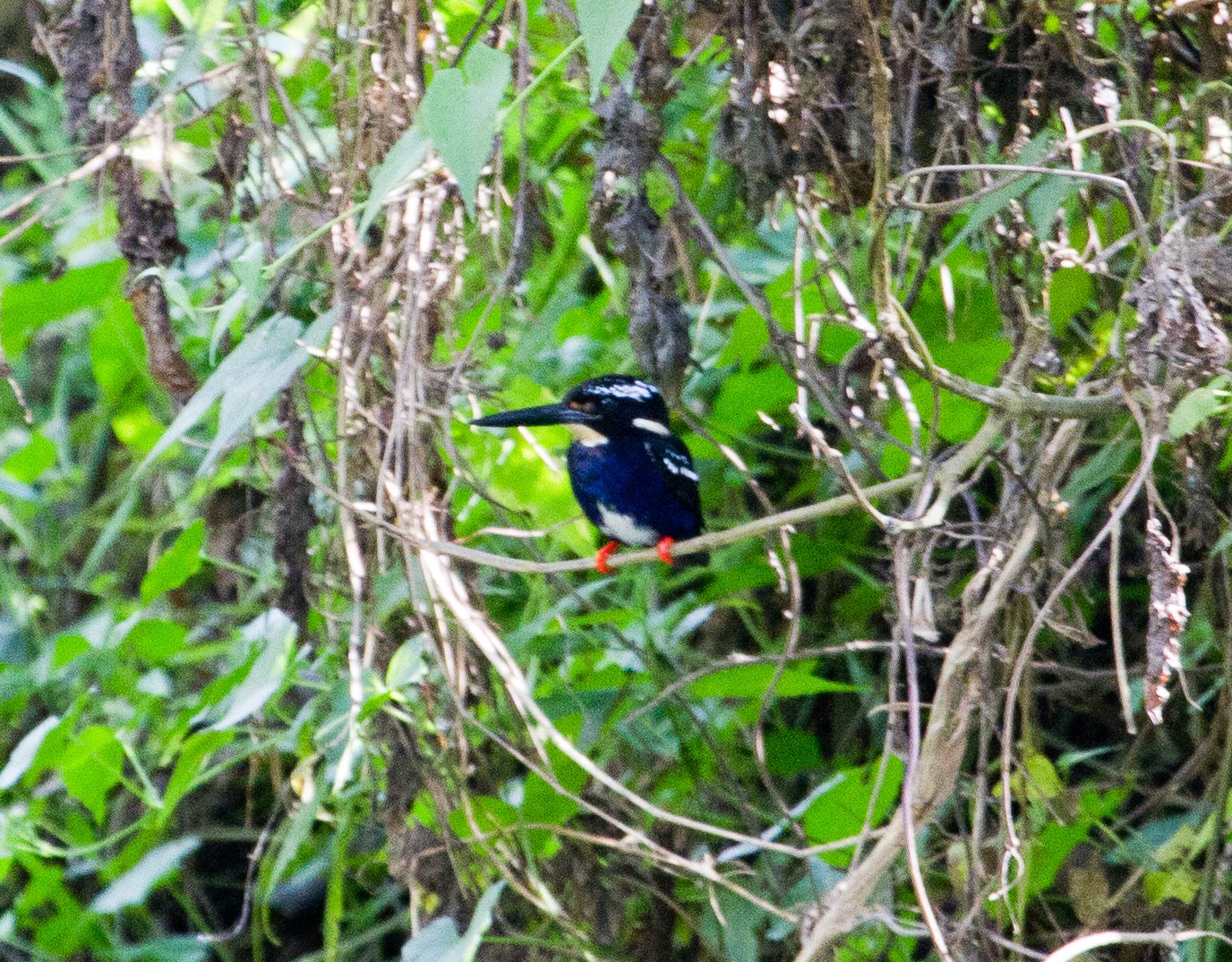 With a beaming ear to ear grin we decided that another touristy afternoon was needed to we headed to the Philippine Tarsier Sanctuary in Loboc. This  is part of a protected forest with a section that is fenced off. However the fence is designed to keep predators out not the Tarsiers in and they can come and go as they wish. These are Wild Tarsiers  and the staff go out and find some Tarsiers that are viewable and earmark the locations for the daily visitors, if they can't find any in the inner area they look at the surrounding forest. I think it is a system that works well. We saw six individuals on this visit They are guaranteed food and water so there is no problem with them returning. A really worthwhile project here with only a small admission charge and such a wonderful creature to see. 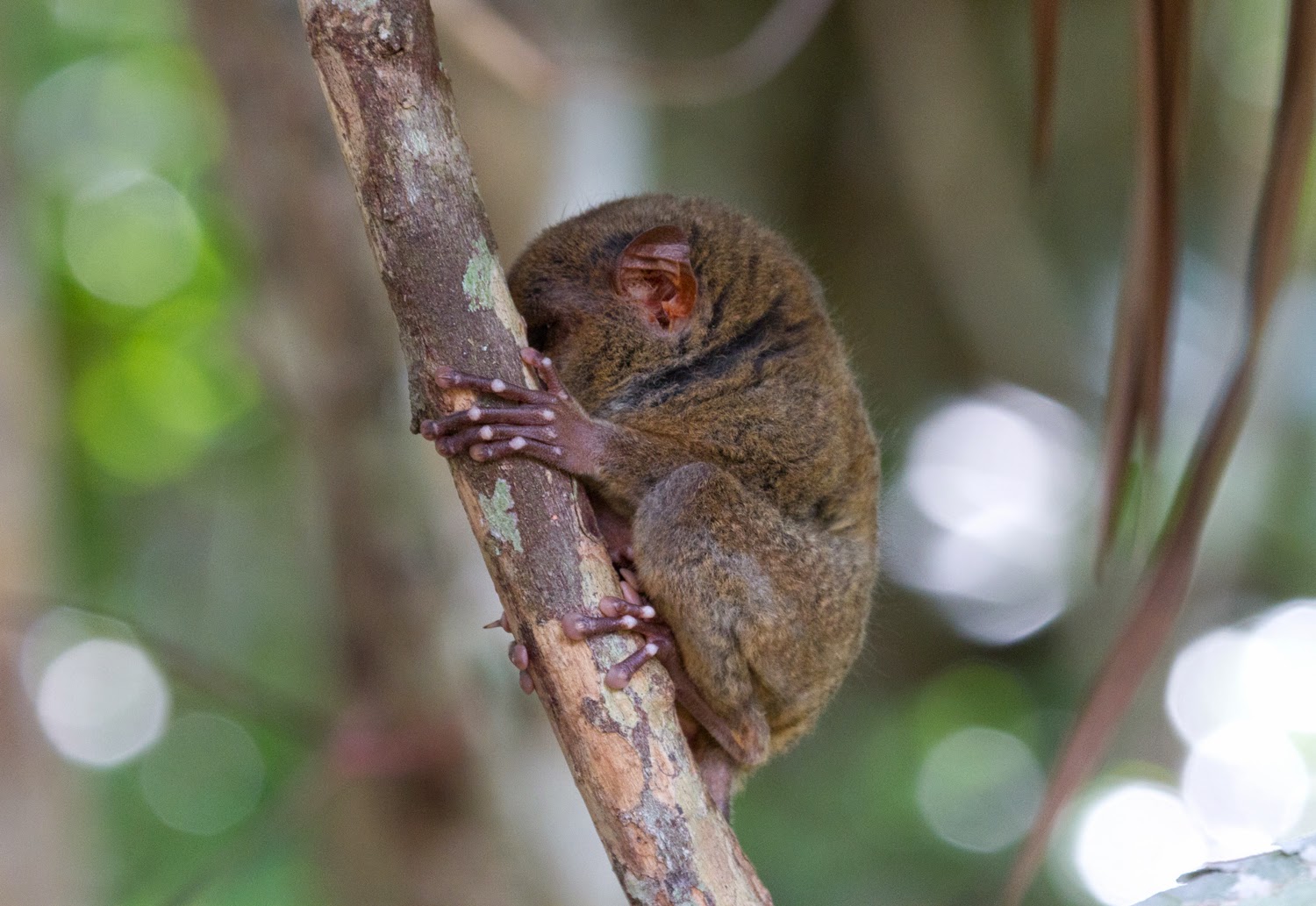 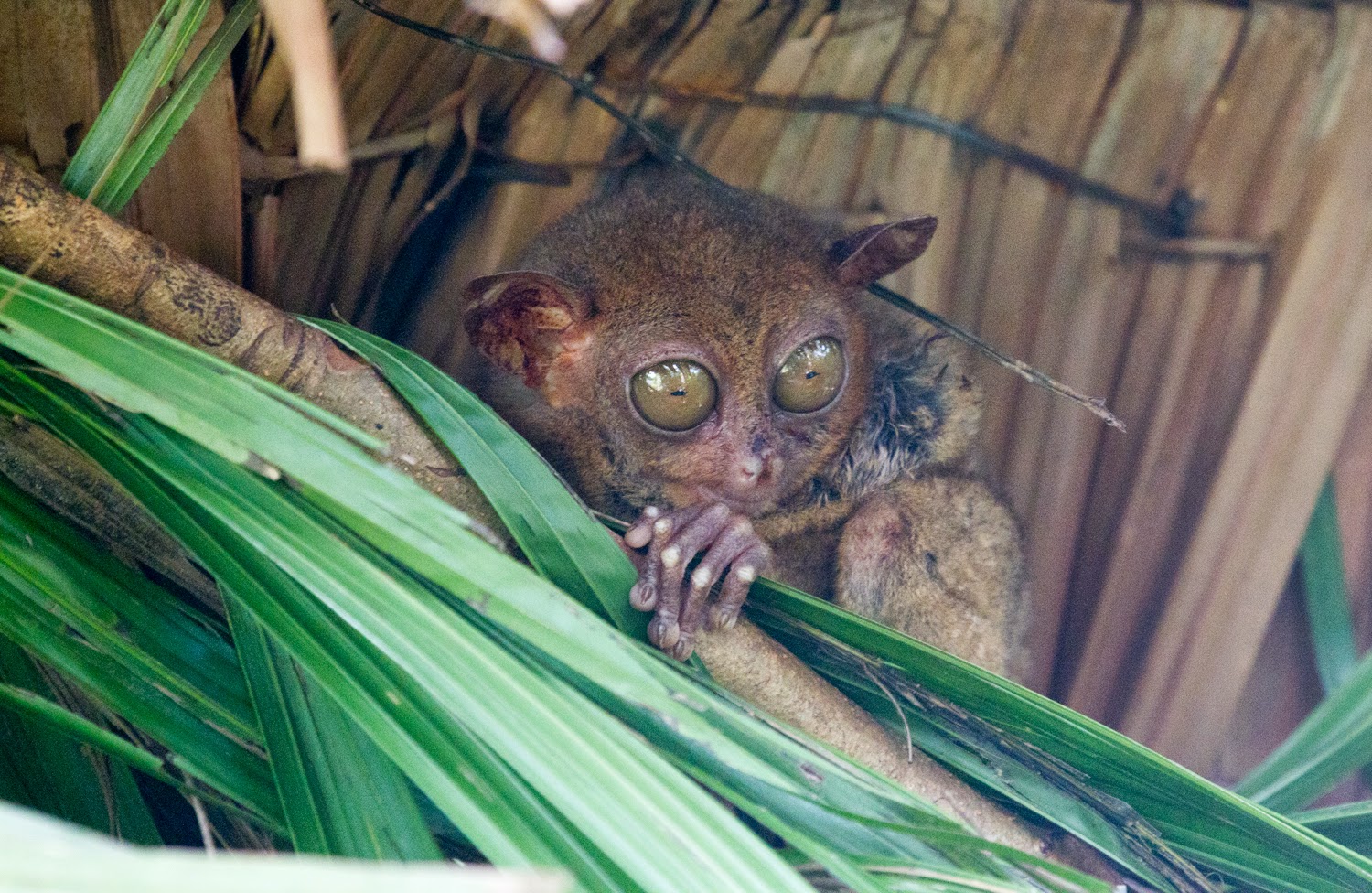 Easy birding day with Ryan. Flowerpeckers and Sunbirds were abundant, we picked up a few missing species. Orange Bellied Flowerpecker and this Purple Throated Sunbird. Philippine Oriole was a scope view but a brilliant bird to see, again another bird we didn't see anywhere else and a pair of Yellow Wattled Bulbuls were a good find and we enjoyed some stunning views of a Samar Hornbill. This immature Brown Shrike was the last bird to see before we went on one last mission. 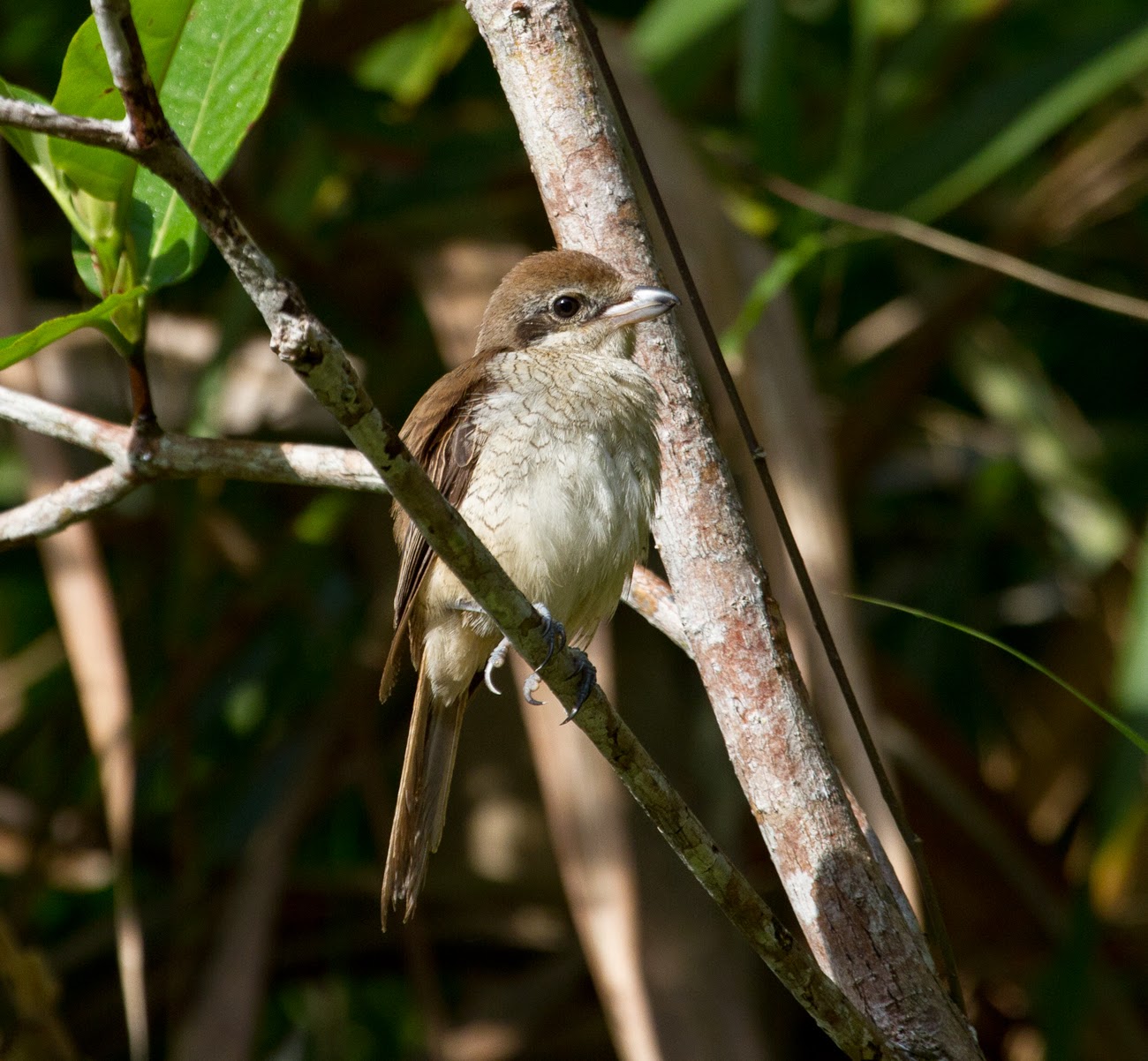 We still had one mega bird to find and time was running out. We had one last hour before heading to the airport so Ryan said there is a last chance as I have heard one only, (never seen) at another location, its a long shot so off we went.
We arrived at a small wooded area down a short track of a campus. Immediately we heard a Woodpecker. A few minutes later and we were onto a stunning female Rufous Lored Kingfisher. Perched amongst thick vegetation, views were good but hard for the three of us to get onto. A male called and the female flew a short distance and perched a little more openly now. Wow what a bird.
Female Rufous-Lored Kingfisher 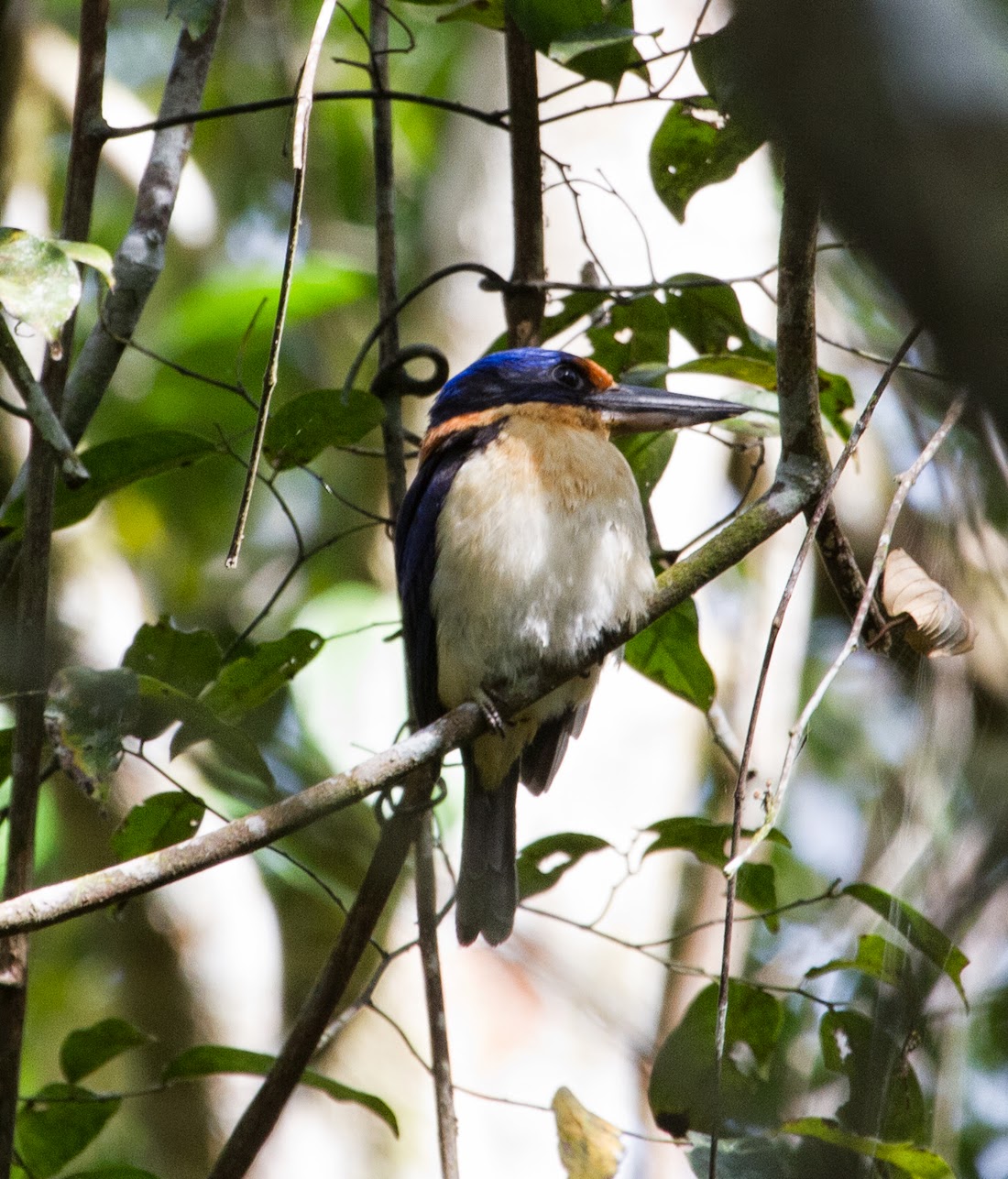 ﻿
A male was were soon located 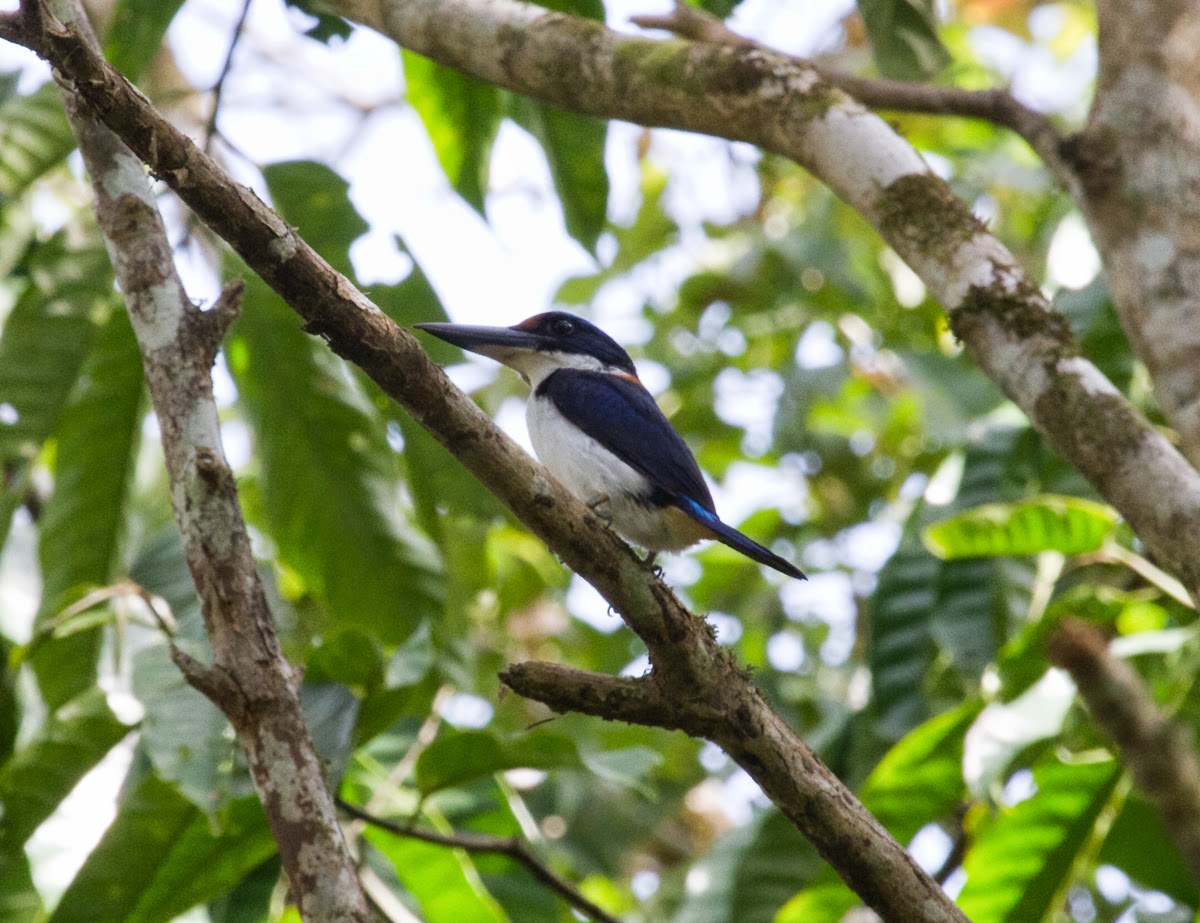 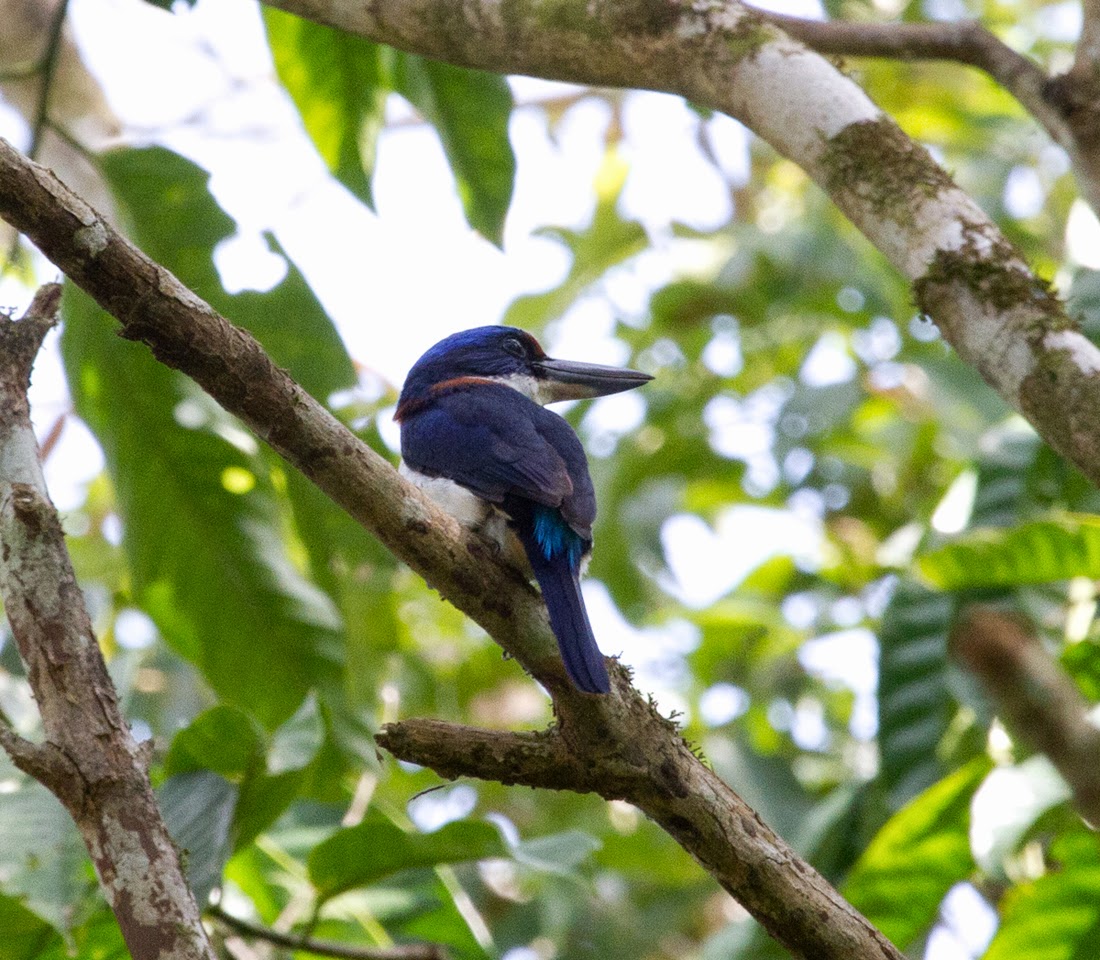 Even Ryan was excited at these views, a cracking end to our stay on Bohol.
Ryan came up trumps for sure, he is a good birder an a master at getting onto birds with the scope, super fast... Overall very happy especially after Day 1 was a bit of a make it up as you go along day.
Next stop the nightmare journey through the busiest city (well at least the most chaotic one!! ) Manila here we come, see the next part soon......
Posted by Dave at 23:52

Amazing shots! At first I thought the Flying Lemur was a hornet's nest. When I looked closer, I could see him all rolled into a ball. Very enjoyable post!

What interesting and beautiful terrain to explore.
YOu did a great job sighting and photographing a variety of exotic birds and animals.

Nicely done! I'm glad that there are areas protected for all these amazing critters. The birds are gorgeous.....including that Trogon. A new one for me:)

such beautiful exotics you got to see!

Just wonderful! I enjoyed both the birds and the cute critters.

What amazing scenery and awesome birds. The Chocolate hills are cool! Your trip sounds wonderful. I love the cute Tarsier with the big eyes? The Sunbird is gorgeous! Great post, thanks for sharing your trip!

Hi. What a wonderful trip with fantastic shots of birds and scenery.

These are beautiful captures. Would love to go there and bird. How do we contact bird guides there? Thanks.

Hi Shey
Google Birding2asia, Stijn De Win will give some good advice and help set up an itinerary.
Dave