Jeff and myself decided on Taiwan for this years birding trip. References and trip reports all suggest a comfortable experience with good birds, good food and done at an affordable price, so why the hell wouldn't you?

This would be my first experience with a Birding Company so really didn't know what to expect only that all the hard work and planning is taken care of for you and you just have to book flights and turn up with your luggage....... easy eh?

The tour had one other birder who we would meet on the Friday evening before the trip proper starts on Saturday morning.

Due to our flight times, Jeff and I were arriving very early and around a full day before our travelling companion. We had booked into a hotel 20 minutes taxi ride from the Taipei international airport (for those that care the taxi cost 50ntd which is about £15).
The flights got us into Taipei about 3 hrs later than scheduled due to a backlog of aircraft that had been delayed by rain storms during the day, when we arrived I found that my case had been left in Hong Kong, I was advised to pick it up later that evening, this worked well as our travelling companion also arrived at a similar time.

Our guide was Richard Foster, a well renowned guide and he had agreed to pick us up mid morning and do some birding near the coast giving us enough time to return to the airport to pick up the third party member Nick Parker.

We were late to bed but awake early it wasn't long before I was ticking of lifers from the hotel window, Light Vented Bulbuls were noisily patrolling the roadside bushes directly below our window while Barn Swallows soared past the window. A second lifer with a Black Drongo and Oriental Turtle Doves made up the numbers for the hotel. After a short walk into downtown for some breakfast we caught up with the recently split Oriental Magpie as 3 were seen while walking back to the hotel, Japanese White-eyes buzzed around a small patch of trees near the hotel. So four lifers before we had left the hotel!

Mid morning and Richard picked us up and we dually headed straight to a good birding area near Dayun which comprised of reservoirs, wetlands and rough arable land.

First stop we picked up a Pale Thrush as it retreated to a line of trees, Red Collared Doves and Spotted Doves were plentiful as were Black Crowned Night Herons perched all around the reservoir, at least 100 in total, as well as all the Egrets that you would expect, Little, Great, and Grey Herons. Richard had info that possibly a Rufous night-heron had been seen here but we didn't find it. Plain Prinias called form the reservoir edges and a single Golden-headed Cisticola showed in some scrub, a Black Faced Bunting dived into the bushes, I missed it.

We drove further towards the coast this time stopping at a complex of paddy fields, some full of rice plants while others were in transition and weren't yet replanted. The star species here were the 3 Swinhoes Snipe. They sat in glorious light part hidden in the rice, two moved allowing fabulous views. We continued along the rice fields and found dozens of Wood Sandpipers, often in large flocks. Richard stopped at a spot that in recent years he had picked up Greater Painted-Snipe and after a little searching I found a female with three chicks, superb bird and a lifer. The views were not that great as they all quickly scampered to the very end of the field and out of sight. A lone Wood Sandpiper in the same area showed well. This was a great spot but was only a small area of a vast complex so we dove off looking elsewhere. 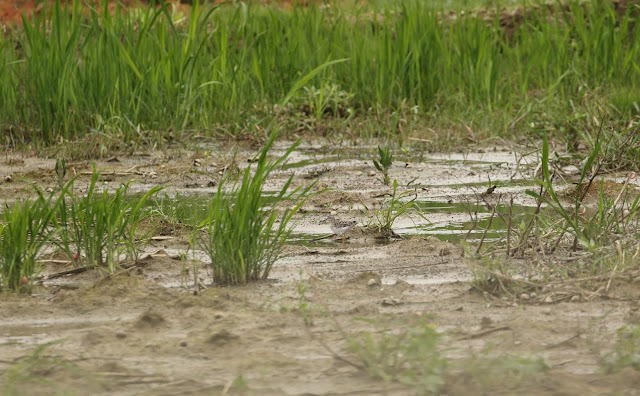 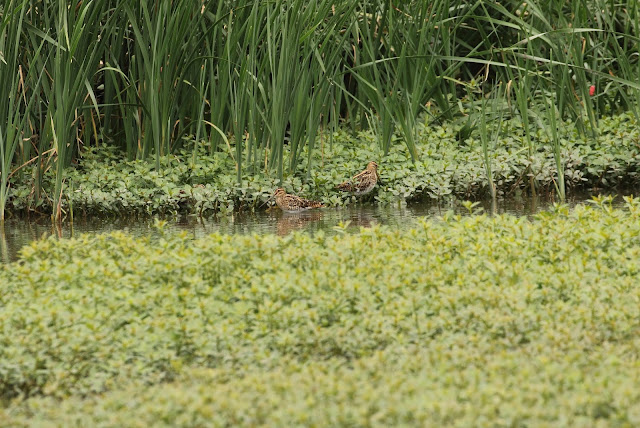 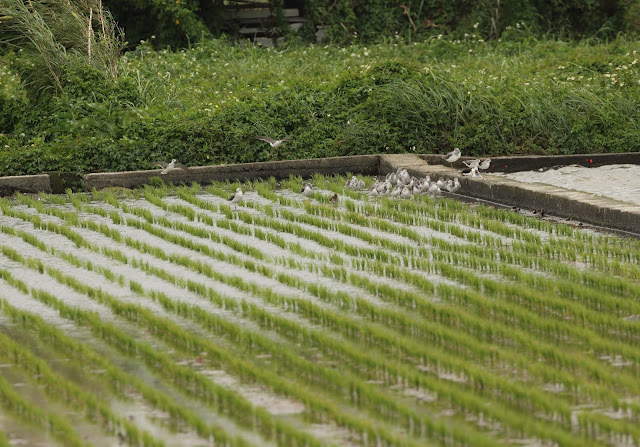 As we drove Richard could see a gathering of Photographers. They were Taiwanese birders who had got onto a Chestnut Eared Bunting. Was weird to become part of a twitch while on a birding tour. Getting onto the Bunting was easy, in fact there were a pair. A very smart bird. 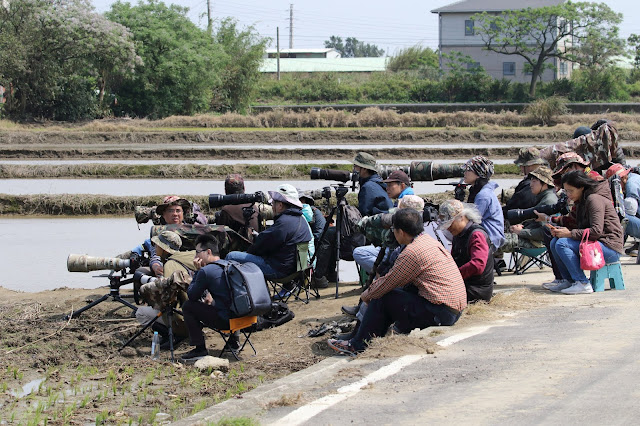 
and the birds them selves - Chestnut Eared Bunting 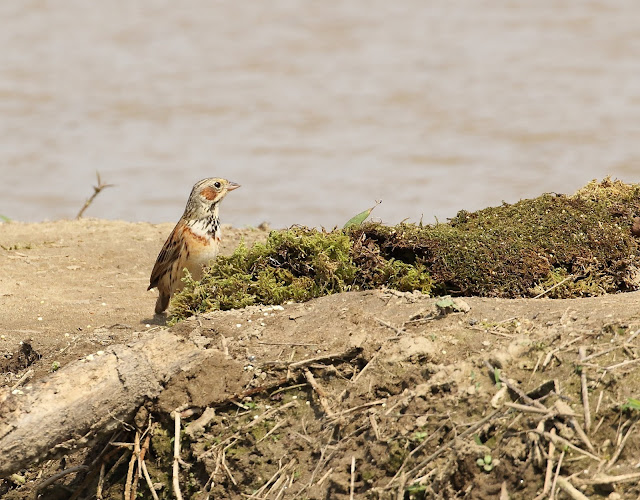 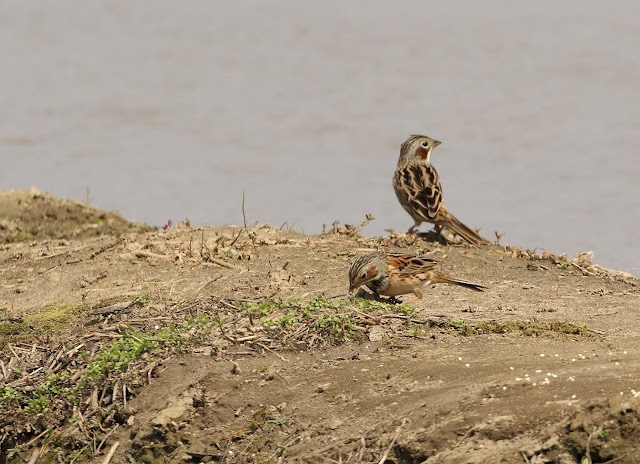 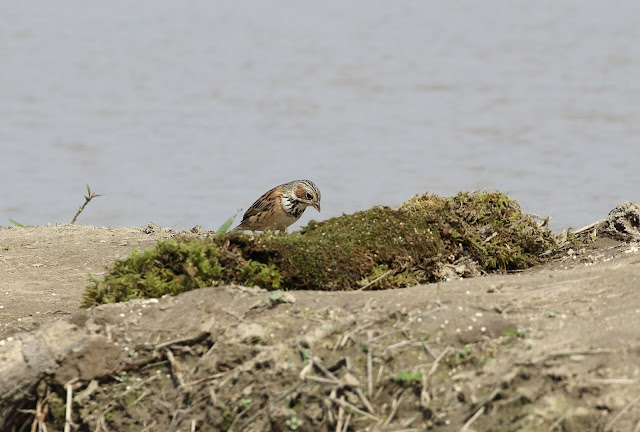 The default bird of the area were most definitely Eastern Yellow Wagtails, these showed in a variety of plumages, I think we also picked a Western Yellow Wagtail that had a very vivid full yellow head. I was also able to pick up the Black-faced Bunting, these too showed really well. Grey Wagtails, stunning full plumaged Red Throated Pipits and Oriental Skylarks patrolled the stubble fields while amazingly we picked up more Greater Painted-Snipe, this both Male and Female, incredible scope views but a little trickier getting a good image. 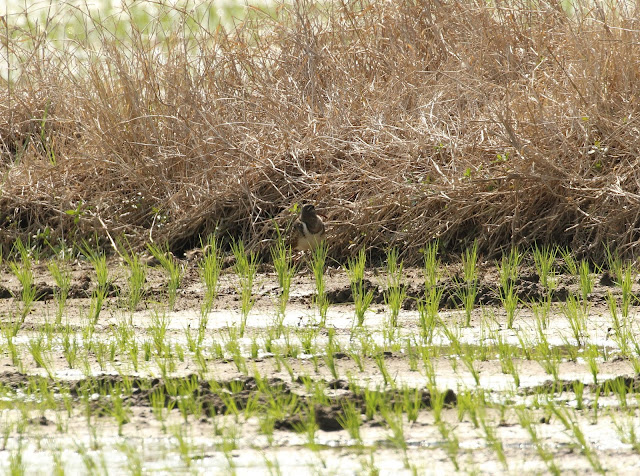 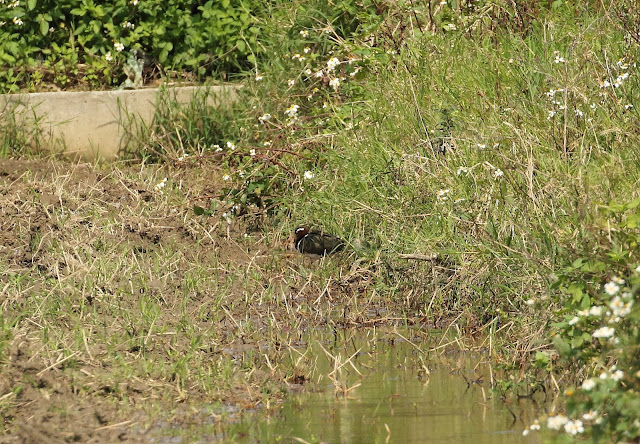 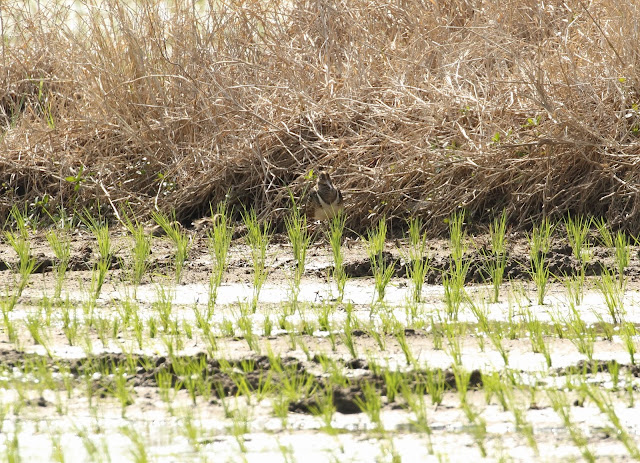 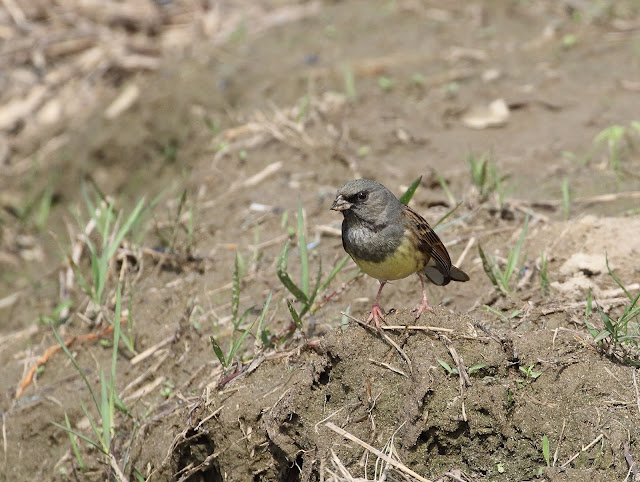 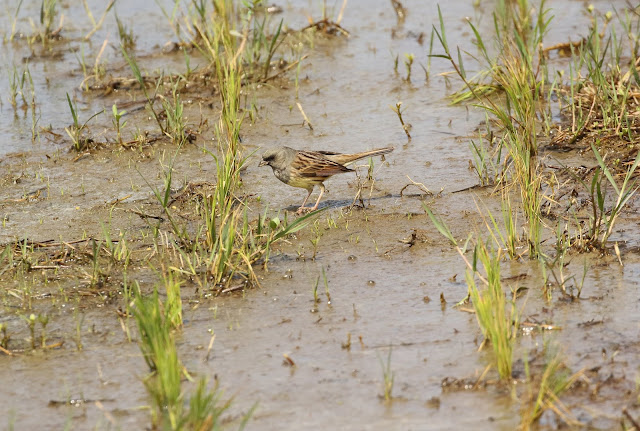 Richard called time here as we had another short drive to make this time to the coast. We had a target here but as soon as we arrived we bumped into another twitch, this time a lot smaller group but the bird was no less stunning. As we got out of the car and bang on cue a Stejnegers Stonechat perched up at eyelevel on post, crippling views. It chased insects around and about for the next 5 minutes or so, we headed off to the beach to find a wader. Sanderlings, Common Greenshanks, Common Sandpipers were easily seen and after a search and eventually a return back to the same spot on the beach we found the Far Eastern Curlew. After enjoying incredibly close views of this bird we had just enough time to pick up a Manchurian Bush warbler before we had to head back to the airport to pick up my case and our trip companion Nick. 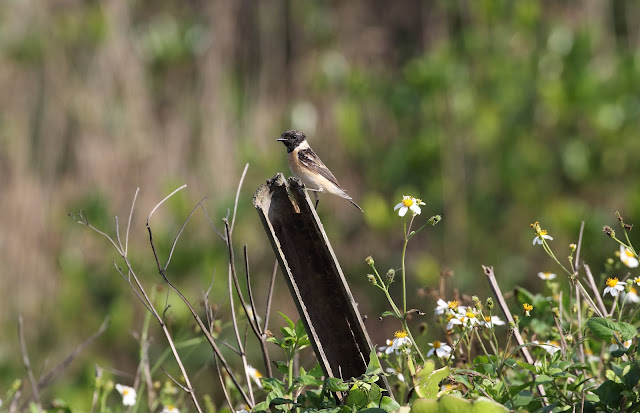 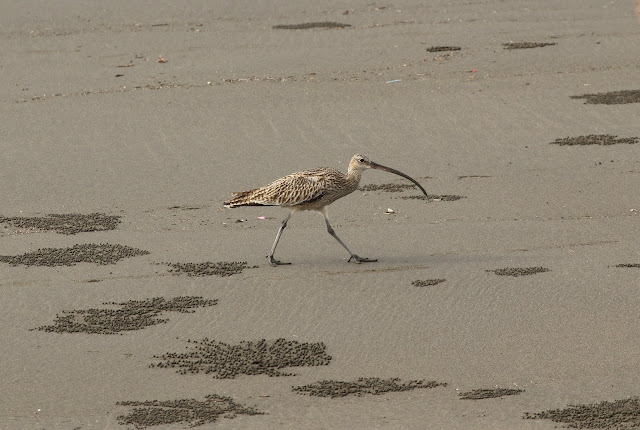 Richard dropped us back at the rice complex to see if we could pick up anything else while he went to stock up on provisions, we only manages White Breasted Waterhens, but he had driven past the Night Heron roost at the reservoir that we visited earlier in the afternoon, he wanted to see if the Rufous night-heron had returned ...... it sure had, along with the resident Black Crowned Night-herons. 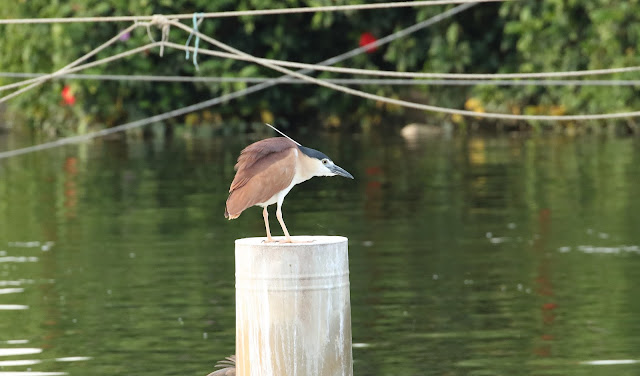 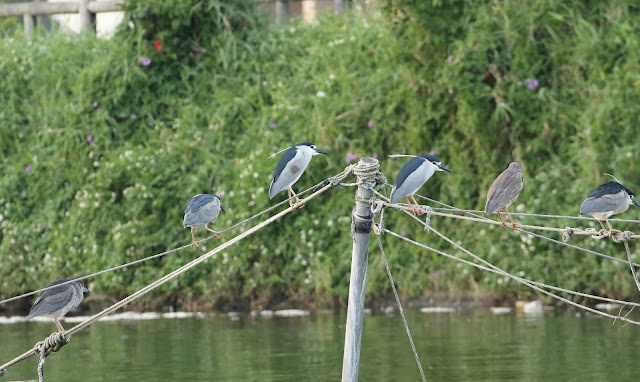 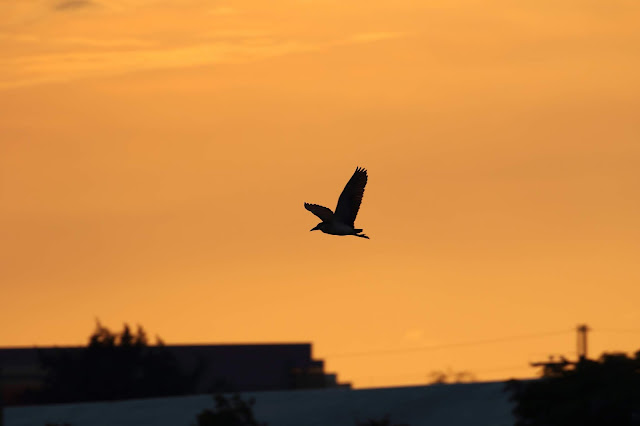 We needed to return to the airport to pick up my case and Nick. Both duly arrived just after 7pm.
Now the party could begin, a full minibus packed with lunches, snacks, beer and 4 birders.

We would drive a few hours to the town of Dongshi where we would be in a good position for Day 1 proper which starts in the morning, but this wasn't a bad precursor, some incredibly good birds and not a single endemic bird was seen.

We arrived at our hotel enjoyed a fabulous Chinese meal, a few beers and a nightcap before retiring for a very early get up, meet at 04.15
Posted by Dave at 07:13

Email ThisBlogThis!Share to TwitterShare to FacebookShare to Pinterest
Labels: Taiwan

Sounds like a great introduction to Taiwan. Would have been four lifers for me and really envious of the bunting. Two snipe species as well - you kept the Painted Snipe quiet!

ah, I remember I was in the middle of telling you when Richard interrupted us......

Hope you enjoy the blog.