Thought I would share this info, some intresting stuff about my local Dippers: 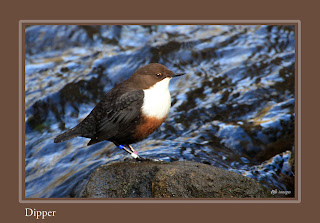 I posted the above image on a birdforum covering my local county of Cheshire. I took the Dipper images in a small village Nr Macclesfield called Wildboarclough on the edge of East Cheshire in March of 2010. The county recorder saw the images and gave the following reply, it makes intresting reading:

"Re the Dipper picture, as you can see this is a colour ringed individual. South Manchester Ringing Group in conjuction with Professor Stuart Sharpe at Sheffield UniV are mid way through a BTO RAS ( retrapping adults for Survival) project on Dippers. The blue colour ring above the BTO metal denotes the river (in this case Clough Brook) and the colour ring combination on the left leg, which territory/pair it was first trapped at. This is a male who was paired with a female by the picnic site near Yarnshaw Hill in 2009. The colour ringing means we dont have to try and recatch the adults as they can be identified from excellent pictures like the one posted.
At Wildboarclough, the Dippers ( and there are up to six pairs down to the A54 bridge from Bottom of the Oven) tend not to spend all winter on territory, most birds decend to lower levels during the winter months. It seems to be the experienced females who get back to key territories (mostly nest boxes under the bridges) first, and then lure a passing male as they move back up the brook ! So the girls are very much in charge in the Dippering world of Clough Brook at least! Having said that we did have one male who manged two females and two broods under adjacent bridges 100m apart in 2009, and even manged a second brood with one of them, who was actually his daughter from a previous season. Would make a good soap opera I think !"

How about that for a few facts about my local bird 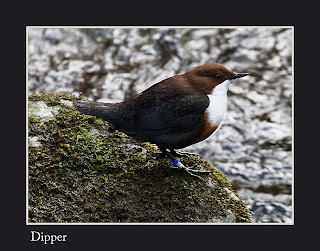 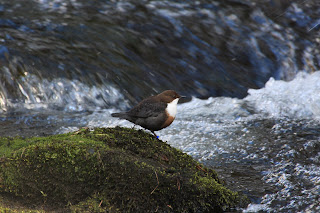 and some of its partner 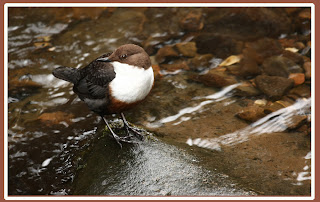 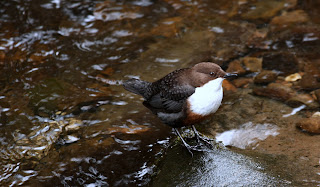 As a foot note I have been back to their territory a couple of times in January but have not yet spotted their return, well maybe they will very soon I hope.
Posted by Dave at 09:21

Email ThisBlogThis!Share to TwitterShare to FacebookShare to Pinterest
Labels: Dipper

Just came across your blog and this fascinating info about Dippers.....great stuff and brilliant images!

Such a beautiful bird! I hope they will return so we can see more about them!

Excellent post and pics Dave. Always exciting to get that amount of detailed feedback on a particular bird.

Very cool Dave! I am always interested in hearing of scientific studies going on with different bird species.

I love Dippers and their previous name the "Water Ouzel" makes them even more intriguing. Plus the fact that they walk and swim underwater in fast moving, ice cold streams is pretty darn impressive.

Thanks for sharing the ringing information on your Ouzel. Very informative.

A pretty little bird, the American Dipper is not nearly as attractive but still fun to watch.

Very interesting facts about the banding and color coding of the different birds. Great that you were able to get such good clear photos to help with the ID.

Excellent shots Dave.
It's great the amount of information from a couple of rings. Makes fascinating reading.

Oh my goodness, incest!!! What a lot of interesting information that they can actually be identified to particular nest sites.
Cheeky little fellow indulging in bigamy as well as incest. I wonder what the bird police make of that!

Great photos - all of them. Most enjoyable post as well.

Thanks everyone for taking time to read. Its amazing what info we can glean from these rings. Of course without these dedicated people all this behaviour would surley pass us by un-noticed... Dave

WOW, I never thought that ringing can get that kind of great Info and that the Internet makes it possible to get such wonderful responses to your photos.
It's an incredible world we live in - in some aspects!
Lovely shots of these Beauties! Hope they return soon and we read more of the soap opera :)

Nice images! I'd love to watch a dipper. Fabulous post! Combining two worlds, water and air. What a way to make a living!

Hiya Dave,
Good grief, talk about Big Brother :-)
Even little birds are in the filing system.
Quite good that your picture was recognized for what it was though.
I like the Waxwing picture in the sidebar.

Excellent shots and such a beautiful little bird!

Well done!! And the essay is good too. Boom & Gary of the Vermilon River, Canada.

Great shots of the Dipper and fascinating to find out it's history. I have a Dipper on the small river that runs at the back of my house and I'm hoping to get some good photographs of it this year.

Adam @ My Life Outside

What an interesting post! You are a professional and I am just hanging out here in amateur bird-watching land -- I appreciate the opportunity to learn from you (and I'd love to see that adorable dipper).

Dippers! Such cool birds, and so much fun to watch! I found a family this summer where we were, 4 fledglings and their parents and watched them forever. Love the photos, all of 'em are great!

What a lovely bird! I'm sure your shots make it justice, they are great.

Gorgeous shots of the Dipper Dave!
I visited the Peak District a couple of years ago, what a beautiful area to bird!