We just had the two targets this morning and would stop at Palmeiras before travelling on to Boa Nova. The Targets were Sao Francisco Sparrow and Broad Tipped Hermit. A short stretch of roadside would be our birding area for the next few hours, or longer if the tricky Sao Francisco Sparrow didn't cooperate! This species can be tricky. ...... well not today. As soon as we parked up we heard the Sao Francisco Sparrow  calling across the road in bushes and it didn't take long for it to pop out and flit (do Sparrows flit?) around for a few minutes. It decided to flyover our heads and sing in the near side bushes. Great views of a smart bird. 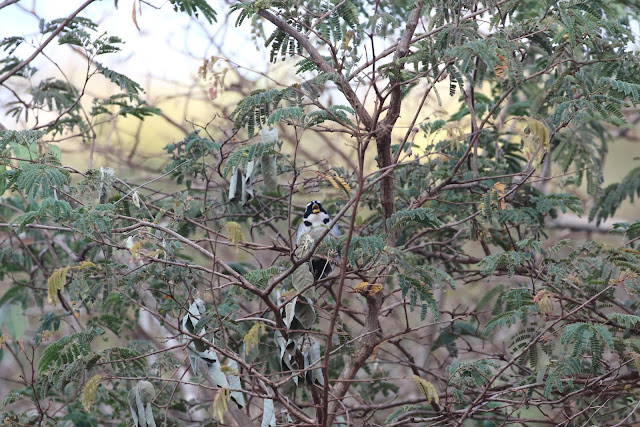 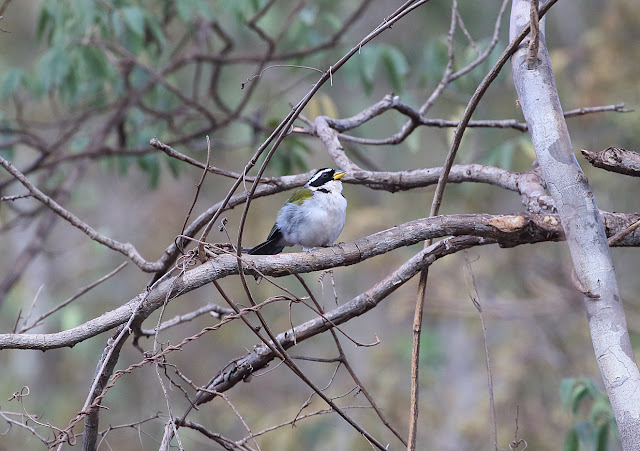 With that tricky one sorted we were able to chillax and enjoy the birding before picking up the other target...... or so we thought.

We probably weren't going to pick up much new stuff here but a much better view of a Green winged Saltator was appreciated,  Pileated Finch, Rufous Tailed Jacamars and an assortment of Flycatchers, Yellow breasted, Streaked, Brown-Crested, Variegated kept us busy whilst we searched tor the really easy Broad-tipped Hermit! yeah right. We listened, searched and watched the time pass. More species came and went, Caatinga Antwren and Silvery-cheeked Antshrikes, a showy Golden-green Woodpecker, Hooded Tanagers amongst the other tanagers. The first sighting of a Short-tailed hawk flew over with a Crane Hawk as time ticked by. Eventually (not sure how long we had searched) but Ciro heard and spotted the target. Jeff and myself didn't, as it darted behind us, Damn! so we waited a while longer. Of course Ciro is a trooper and he wouldn't leave until we had seen one, and around mid-morning the Broad-tipped Hermit dually obliged. We had 450km to Boa Nova so without further ado off we set, well we got about 400yrds before we had to stop for an East Brazilian Chachalaca that flew into a roadside bush. 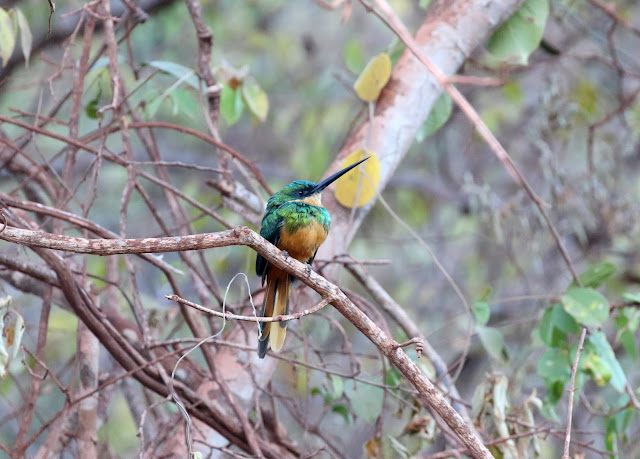 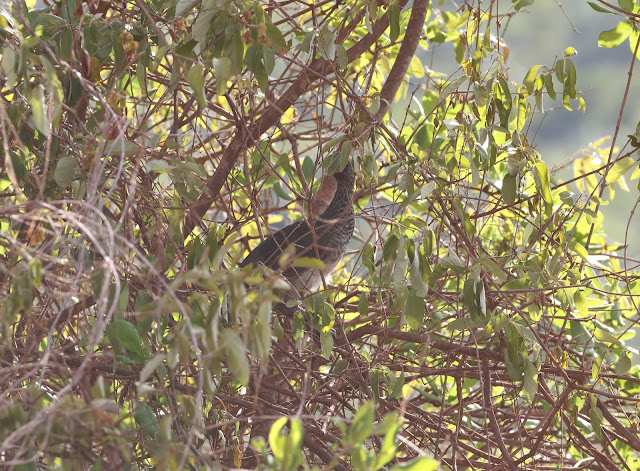 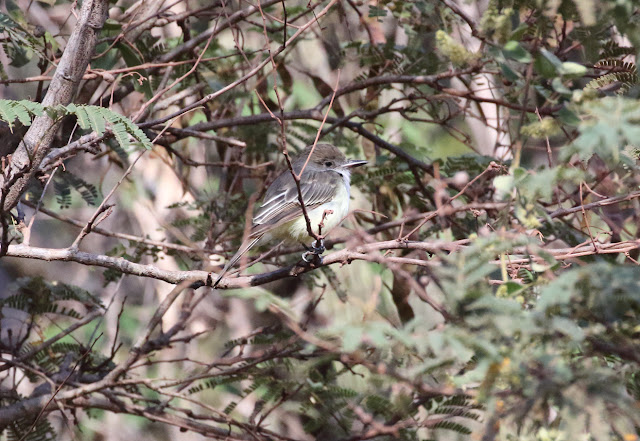 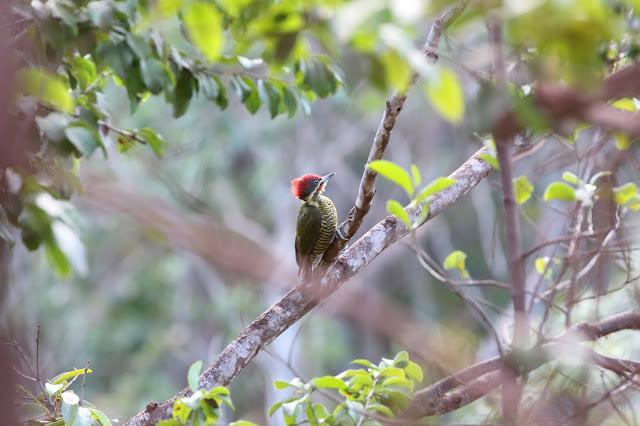 We made plenty of  stops en route to try for a few species. The first target was Rufous-sided Pygmy Tyrant. This was an easy capture as this very smart little bird perched up for us and sang heartedly, and then Ciro called us back over the road as he had heard a Horned Sungem. A quick apology to the Pygmy-tyrant and a run across the road we stood in silence while Ciro tried to pick up its call again. In the meantime I picked up a Rusty-backed Antwren.  The Horned Sungem was one of my most wanted trip species so it was an anxious few minutes until one flew fairly close and perched, We all got onto it, it was a male and its a stunner. Unfortunately a rival male decided to contest a fight and they both flew off one in pursuit of the other. No picture, sometimes the view just has to be enough. 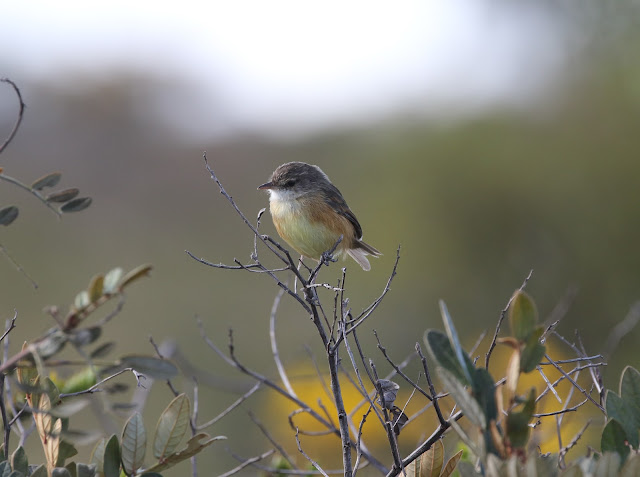 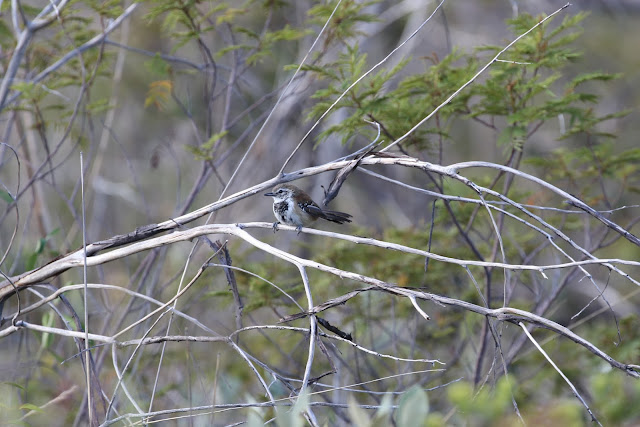 ﻿
We stopped a short while later to locate a Collared Crescentchest, another stunning little bird. More stops along the way kept the bird action ticking over very nicely with a Blue Finch that Ciro found easily enough at the right location, whilst very closeby two Red Legged Seriemas called to each other but we didn't have time to go looking. An unplanned stop on the edge of a village was a hive of activity in a stubble field. Just about every seedeater in the area were congregating. Copper, White-throated, Yellow-bellied and yet one more lifer with a Plumbeous Seedeater. We continued en route, and yet again you cant beat local knowledge as Ciro pulled into an orchard type area where we bagged a few more lifers with a White-vented Violetear and Brown Chested Martins. It had been a great mornings birding, yes the Broad-tipped Hermit had been frustrating but we had seen every target and got a bonus with the Chachalaca. 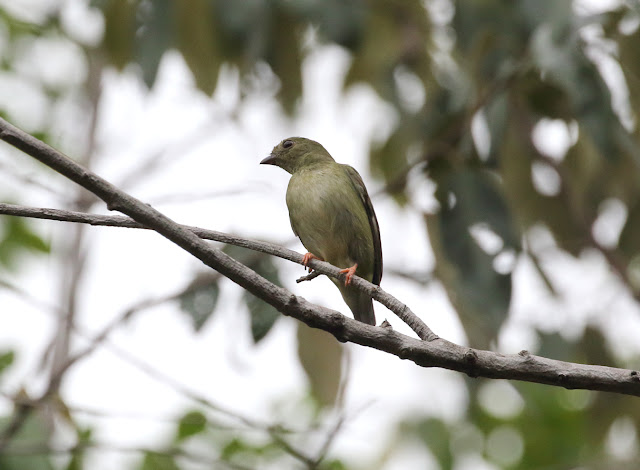 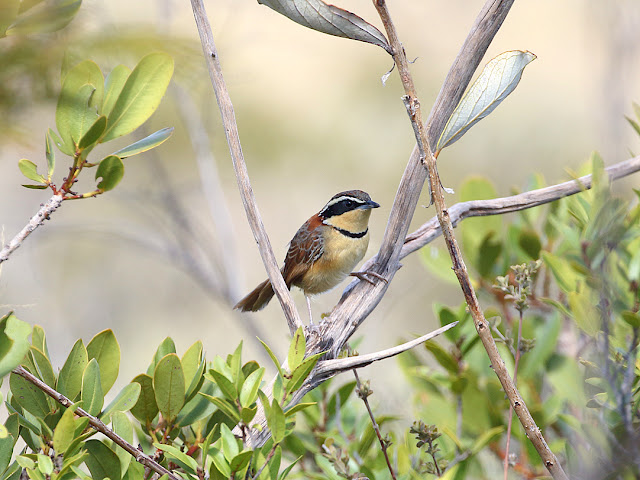 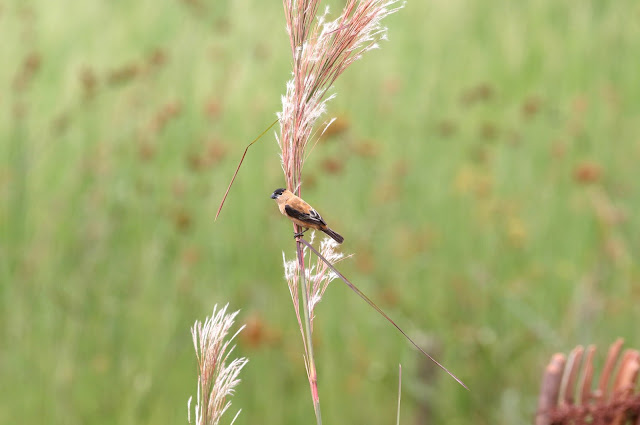 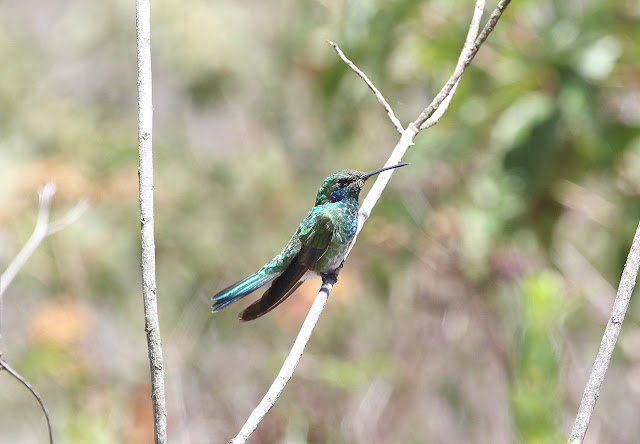 ﻿
This afternoon we had one more stop before reaching Boa nova. This was under a small bridge alongside a busy main road. Ciro played back for a short while and within a few minutes we had a Diamantina Tapaculo, under a bridge along side a busy main road..... madness! We got a very quick glimpse of a Spix`s Spinetail (we would get stunning views in a few days time), and alongside the bridge a pair of lovely Yellow Tyranulets. Add a White-tailed Hawk for good measure, now we really do have to make tracks. 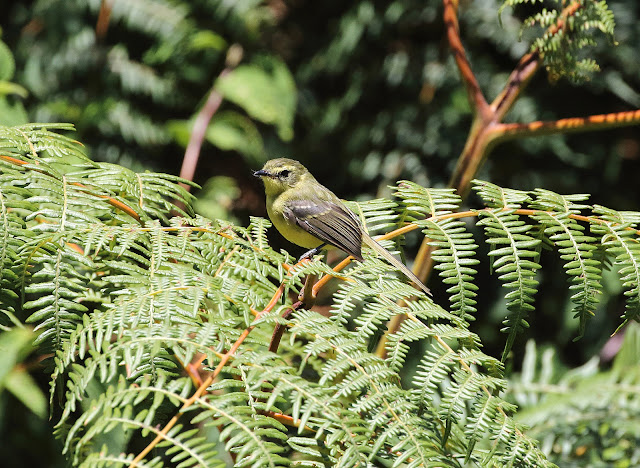 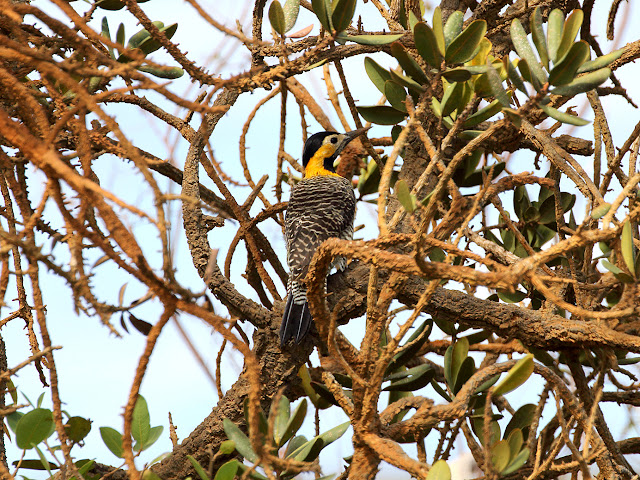 Before booking into our accommodation in the town of Boa Nova we had enough time to track down a few targets that are restricted to a very small area of the Bahia region of NE Brazil. The Slender Antbird is endangered and has a very small fragmented range and population as the habitat is declining rapidly, mainly for cattle pasture, whilst the Narrow-billed Antwren is considered as Near Threatened.and although its population is believed to be small it appears to tolerate some forest fragmentation, both of these species were on this evenings target list. The good news is we got both, firstly a pair of Slender Antbirds mingled with three White-shouldered Fireye, both the male and female Slender Anbirds giving great photo opportunities, a Lesser Woodcreeper, the first of the trip and another Planalto Slaty-antshrike were seen whilst we searched for the Narrow-billed Antwren. We didn't have to move too far or wait too long, first a Hang-nest Tody-tyrant and then the Narrow-billed Antwren. Unfortunately this bird didn't give me any chance of a photo. Booked in just before dark we hoped that the Stygian Owl that had been roosting in the large tree outside our Pousada the previous nights would shuow up, alas it didn't, and wouldn't the next night either. 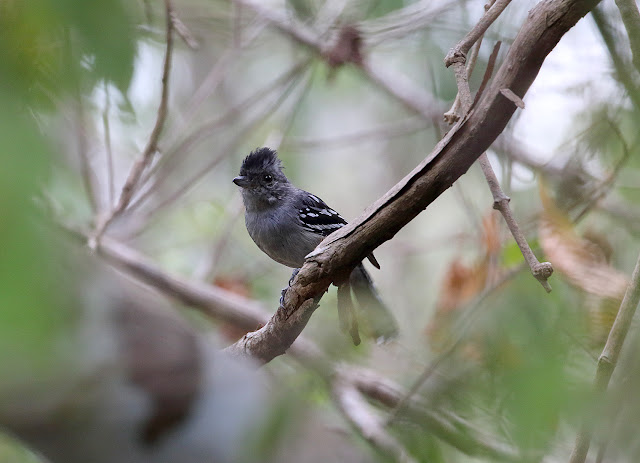 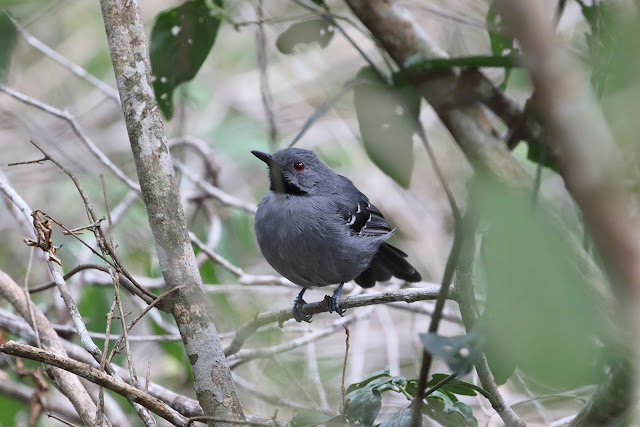 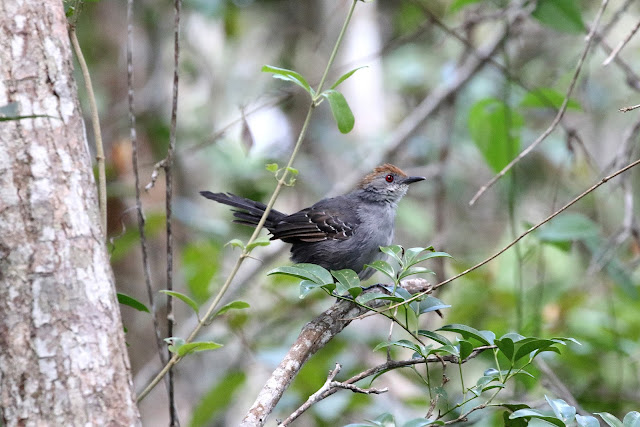 ﻿
Tomorrow a full days birding in the Parque Nacional de Boa Nova.
Posted by Dave at 16:05

Tricky little birdsto photograph with all the foliage around Dave but you managed very well.

Tricky little birdsto photograph with all the foliage around Dave but you managed very well.