Leisurely breakfast and a last look at what had been the local species for the past 36 hours, the feeding area and veranda held the species that we had seen during our stay, Maroon Bellied Parakeets, Violacious Euphonia, Red-necked Tanager, Black Jacobin, Sombre Hummingbird, Sayaca Tanager but this morning they were joined by a Buff-throated Saltator, our first of the trip. As we packed up we heard and then saw a Sharp-tailed Streamcreeper, a host of the usual flycatchers including a first sighting for us at the reserve of a Social Flycatcher (Three-stripped, Boat-billed and Variegated had been the default large flycatcher around the reserve) . We said our goodbye to our excellent host, Vitor and travelled down the mountainside with a few targets to mop up before we left. It didn't take long to see a single Golden-capped Parakeet in virtually the same place that we saw it on the way upto the reserve a few days ago. Then quite soon after and slightly further down the road we had a fantastic flock of over twenty White-eared Parakeets, well worth stopping for half an hour to enjoy their noisy antics. To compliment the Parakeet morning we got onto a distant single White-eyed Parakeet, in the scope. As we travelled through the villages we were quickly reminded of the change of elevation and habitat as we were back to seeing plenty of Smooth-billed Ani and regular farmland species. 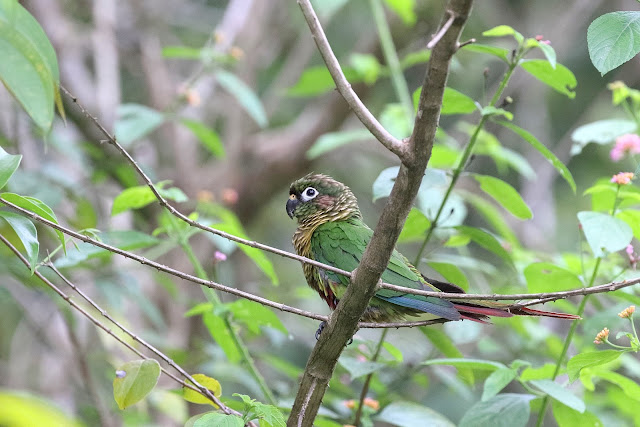 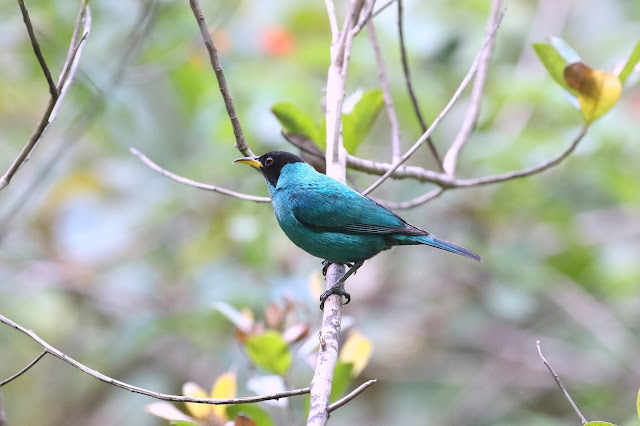 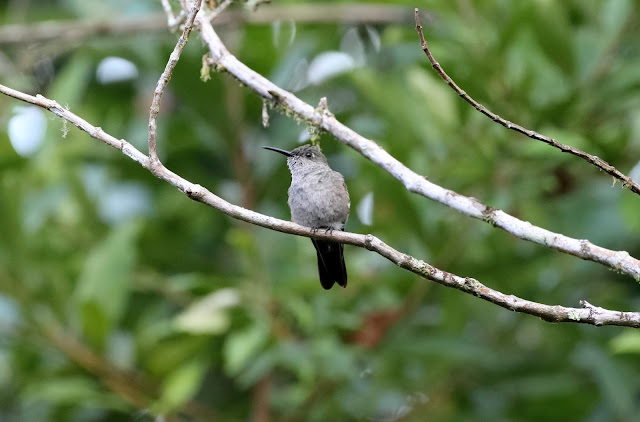 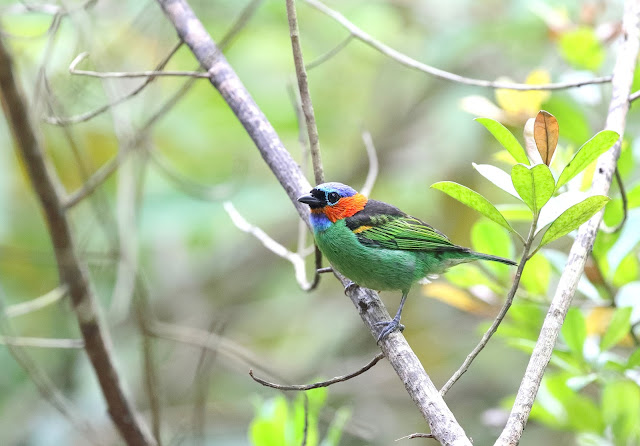 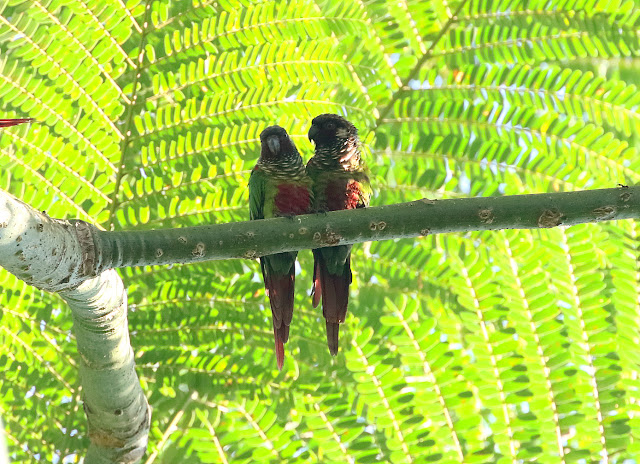 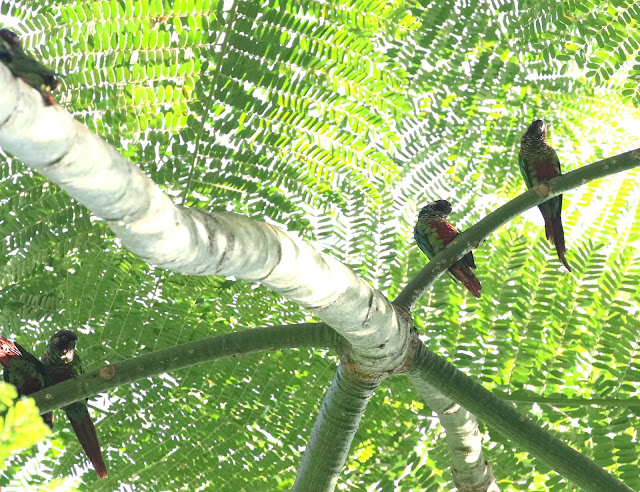 Before we completely left the Camacan area Ciro had a spot for a Bright-rumped Attilla, it didn't take long to find, while Jeff and Ciro also got onto a few Green-headed Tanagers, this is one that I will have to track down in the few remaining days of the tour. Even with the windows up and the air con on, Ciro somehow managed to hear  a Chestnut-backed Antshrike. We stopped suddenly and deep within some large bushes a fanstic male posed for the camera, brilliant lifer, just for good measure we got in the adjacent tree another lifer with a Grey-crowned Flycatcher....... what a great unexpected stop, don't you just love it when the birding gods are with you. Ciro wanted to stop at a pool that would give us great views looking upto the Serra Bonita reserve to allow us to admire the habitat that we had enjoyed over the that 2 days. Sure enough the view was fantastic while on the pool Brazilian Teal, Wattled Jacana and Least Grebe were accompanied in the rushes by a Rufecsnet Tiger-heron, Chestnut-capped and White-browed Blackbirds and near by a Silvery-flanked Antwren. Before we got back into the car Ciro nonchalantly pointed out half a dozen Peach-fronted Parakeets, what a morning for Parakeets including two lifers. 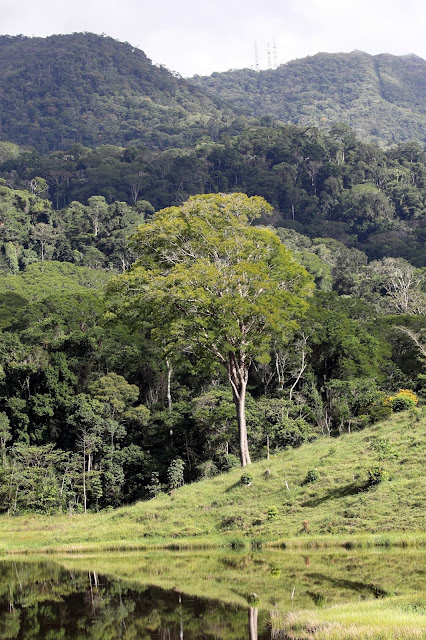 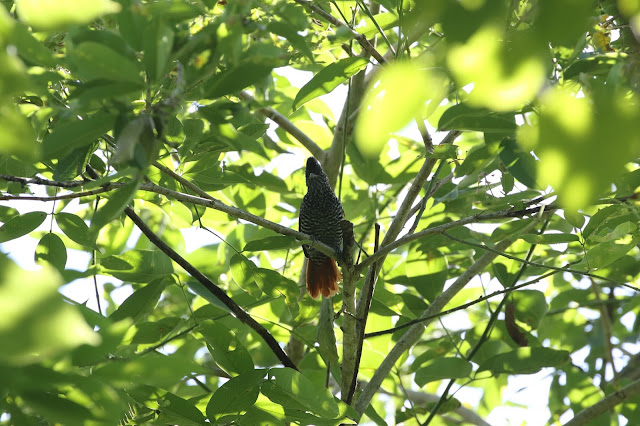 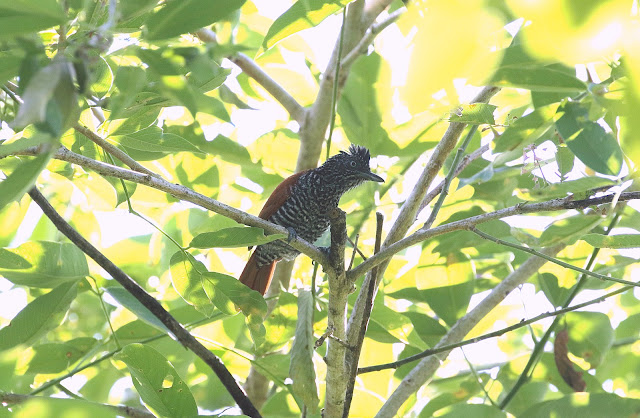 Eventually having to drag ourselves away we hot the road heading towards the coast and the holiday town of Porto Seguro. We arrived lunch time booked in and planned to head of to the Veracel reserve mid afternoon onwards. We would have four sessions on the reserve, this afternoon, full day tomorrow and a morning to mop up anything that we may miss. With some big targets here and the trip drawing to an end we were hopeful of some great birding. The Veracel reserve which is a Lowland Atlantic forest on a white sand base but it holds several rarities such as Hooked-billed Hermit, which luckily we didn't need now, Red-browed Parrot, Ochre-marked Parakeet, Band-tailed Antwren, Bahia Antwren, White-winged Potoo, White-winged Cotinga and Banded Cotinga which is very rare, but here is the best place to try. We would have a few hours to pick up some bits and bobs of species, but this evenings real target was the White Winged Potoo. The bits and bobs started well as we had only just passed the headquarters of the Veracel Environmental station when Ciro pointed out a very smart White-bellied Tanager Tangara brasiliensis (ssp of the Turquoise Tanager) which is limited to coastal NE Brazil, it was here that we saw yet another Hook-billed Hermit and a new for the trip, Dusky-capped Flycatcher. A host of other species new for the trip but not necessarily lifers were Swallow-winged Puffbirds which if you are in the right place always turn out to be common, Red-legged Honeycreeper....ditto, few found a few spots for the ever calling Sooretama Slaty-Antistrike, a good find and future split with the Brown ( split from Rufous-throated) Shiffornis, while at least three King Vultures soared lazily high over the forest, while in amongst the many Blue Dacnis and Honeycreepers appeared one of our main targets with at least a pair of Bahia Antwrens, giving surprisingly good views out in the open. A pair of  Wedge-billed Woodcreepers (also new for the trip, and our only sighting of the trip), were supported by a Buff-throated Woodcreeper Xiphorhynchus guttatus guttatus which has a very isolated population on the Atlantic coast. 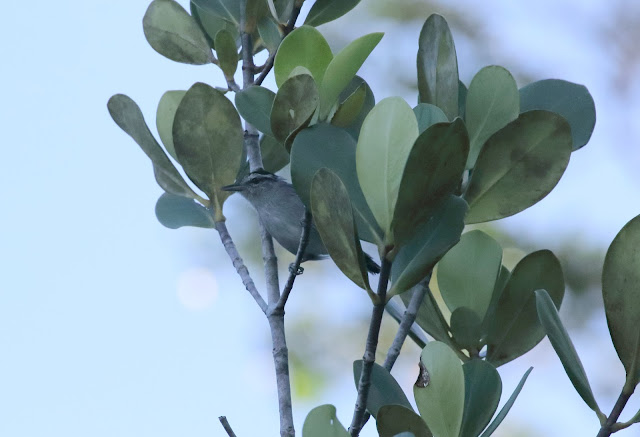 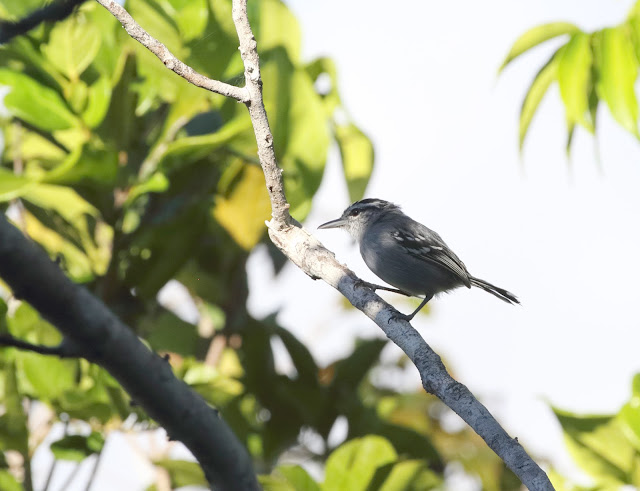 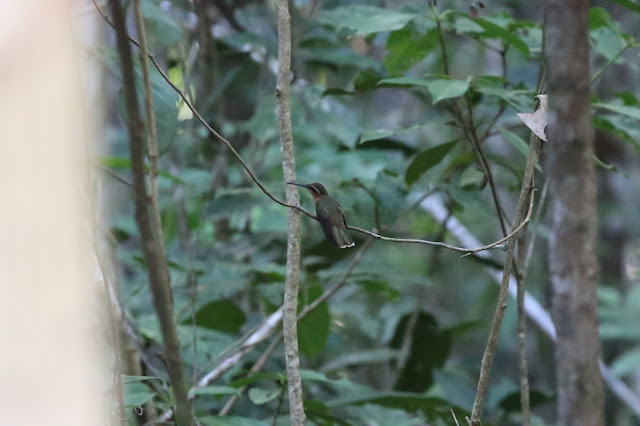 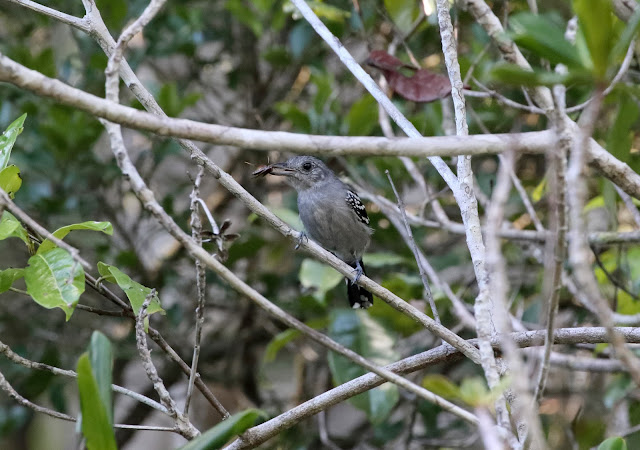 With a little light left we parked up at a flowering bush and watched a host of Hummingbirds feed, a few species that we had followed around for most of the trip such as Reddish Hermit, Swallow-tailed Hummingbird and Violet-capped Woodnymph but the bush also held three more species of Hummingbird that would be additions to the trip list with a pair of Rufous-throated Sapphire's which were a lifer for me, also a few Blue-chinned Sapphire's and White-chinned Sapphire's. White-crowned Manakins gave close views and would continue to do so for the next few days. With the daylight virtually gone now we headed off to another part of the forest in search of White-winged Potoo. To keep the paragraph short as it was a fairly lengthy night, we waited at the spot and heard it call on many occasions but it was distant, we stayed put for 90miutes or so but just couldn't get it to come closer (this had been its favoured spot and was seen regularly over the preceding weeks), the weather had now turned against us as drizzle set in and eventually turned to constant rain that would force an early exit. We tried a few other known spots and had no calls and eventually returned to the favoured spot but we had now lost contact wit the bird as the calling stopped On leaving the thick bush we had picked up a call from a Black-capped Screech-owl and while navigating in the rain, dark and with umbrellas we managed to spot the little fella and get a few reasonable images, a saving grace to the nights work but disappointed not to quite get the Potoo..... oh well we have all day tomorrow to go again. 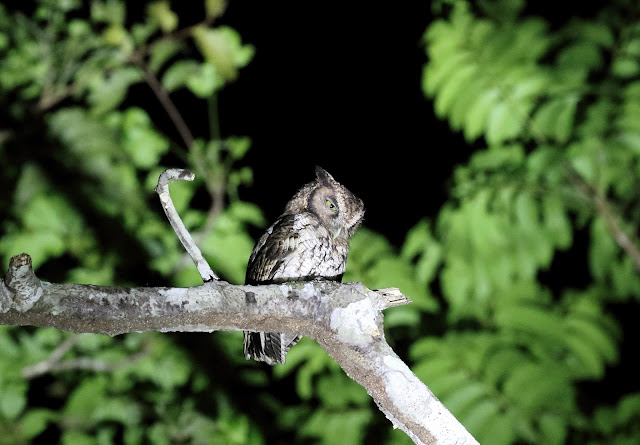 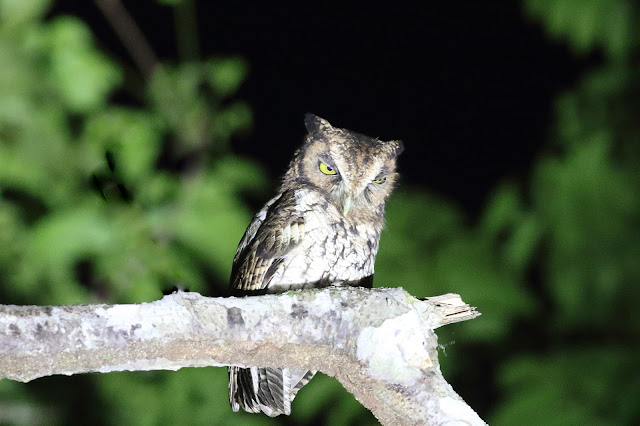 Hi there - South America!! Wow, what a great collection of birds. Another thing added to the bucket list!