We had a full day here to explore the reserve with a number of specific targets, one being the Pink-legged Graveteiro that was not as important on todays list as we got to see a pair en route to here yesterday afternoon, but it didn't stop us seeing at least 3 more birds here, although as Ciro had already suggested the views may not be as good, he was right as they stayed in the under canopy all-day today. After  breakfast we quickly checked out the feeders where a Black Jacobin and Sombre Hummingbird still fought for the feeder, while a single Red-necked Tanager perched quietly, possibly waiting for the bananas to be put out. We set off  heading onto the main reserve  tarmac road which would take us down to a slightly lower elevation, before we left the parking bay be saw a locally common (as common in the reserve), but rare Atlantic race (soon to be split) Rufous-brown Solitaire, a few individuals put on a show for us and were joined by two Chestnut-crowned Becards, our only sighting of the trip. A Sharpbill gave a fleeting view but as the day progressed we would hear plenty more with their distinctive call and get superb views and photo opportunities later in better light. We set of downhill and immediately came across some of the common species such as Variegated Flycatcher, Golden-crowned Warblers, yet more Sooty Grassquits, Long-tailed Tyrant, Palm and Sayaca Tanagers, be careful and check the Sayaca Tanagers as they also record Azure Shouldered Tanagers here!

The morning sun started to come up even thogh most of it was filtered out by the forest but it now allowed us good views of pretty much everything we saw ...... well almost!

I had a personal lifer fest for the next few hours, Rufous, Headed Tanager, Pale-browed Treehunter, Grey-fronted Dove, stunning Black-throated Grosbeak, and one of my most wanted trip species Eastern-striped Manakin which gave us 5 minutes or so of good views but was an active fella that kept moving enough to keep just out of any sort of good camera shot, Spot-breasted Antvireo, however the Plumbeous Antvireo that called out around every corner and on every track was an absolute fecker to see, hours and hours later, one, then two darted across the track only giving the very briefest of views. Everything else by comparison fell into place as the day unfolded. Not everything were lifers, but forests usually attracted thrushes and Yellow-legged and White-necked Thrushes, but add a pair of Thrush-like Wrens displaying which were a nice lifer and kmade sure the activity was constant as we looked for the other targets. Nearly 400 bird species have been recorded on this reserve ad today Ciro would find two more that he thought had not. We headed up towards a telecom tower specifically to look for Bahia Tyrannulet in a reliable spot. Alas not today, we searched the area thoroughly and did manage other species, Violet Capped Woodnymph, Tropical Pewee, Chilean Eleneas, Orange-bellied Euphonia, then Ciro heard a Three-Striped Flycatcher call so we headed towards it.....  it gave stunning views, but right at the telecom tower itself was the surprise of the day. Ciro called Jeff and myself over and perched up and out in the open enjoying the sunshine was a rather stunning male Swallow-tailed Cotinga, this certainly wasn't on my trip list and probably the surprise bird of the tour. Happy with that we were about to set off downhill when Ciro spotted amongst the Grey-breasted Martins and Blue-and White Swallows a reserve first sighting of a Purple Martin. Sometimes the simple birds have a huge impact at a certain time, Ciro was happy for sure, we were all happy with the stunning Swallow-tailed Cotinga. We continued to look for the Bahia Tyrannulet and almost in the exact same spot theat we searched an hour before, we found a small flock of them, frustratingly they stayed high in the canopy of the highest trees.Jeff and Ciro managed a Bran-coloured Flycatcher just before we left the area, it was one that I didn't need to delay the adventure for as I had seen many in Venezuela. 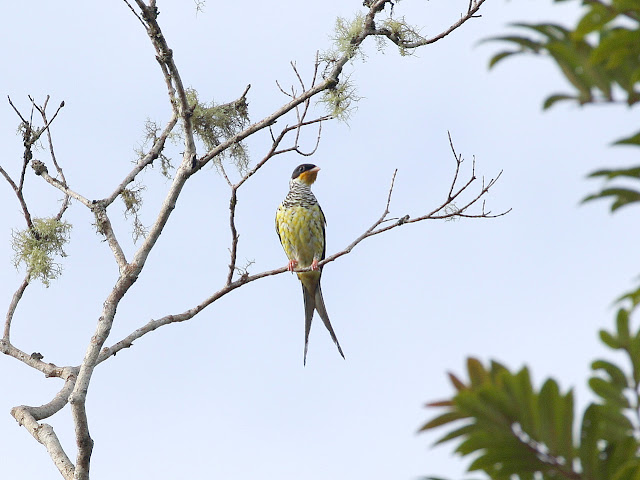 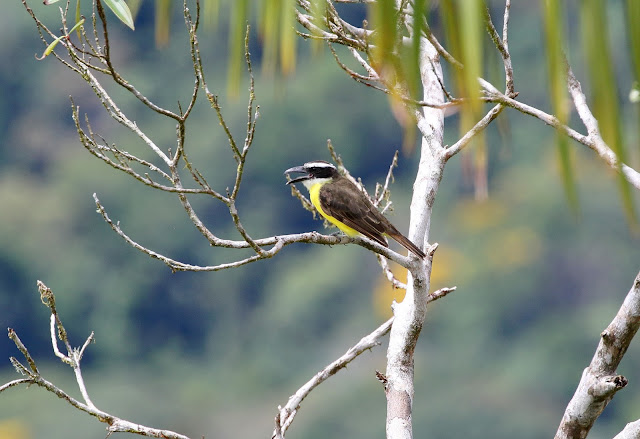 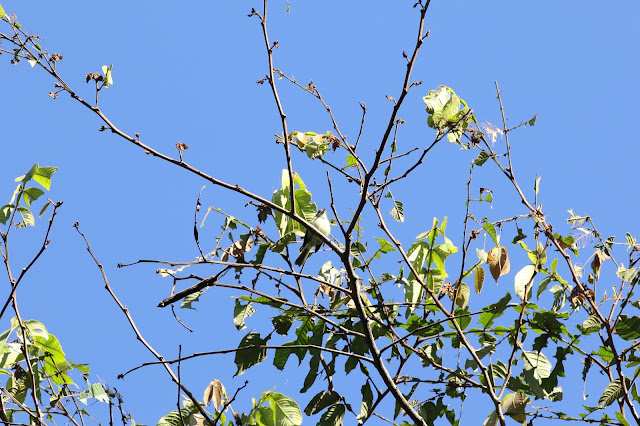 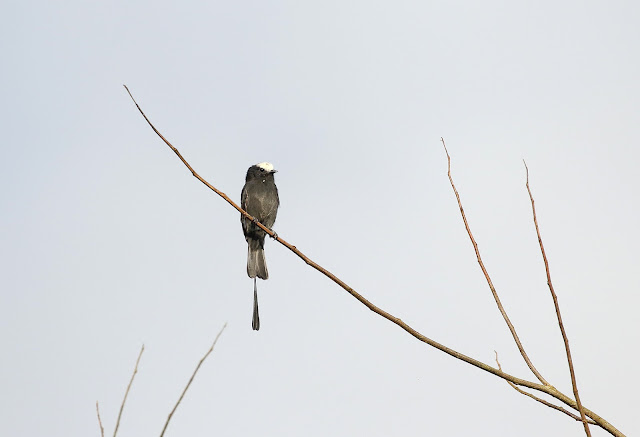 We would bird our way back towards the lodge for dinner and would pick up plenty more, a very showy Ferruginous Antbird, two lifers in the same tree, White-barred Piculet and a Suracua Trogan, it always a nice feeling when your walking downhill having just bagged two lifers almost on the same branch. We now hit a stretch of track that gave us the views of the reserves highlight bird with at least half a dozen Pink-legged Graveteiros, more views of Flame-crested Tanagers, this time a pair moving the through with a mixed flock that also held, Common-tody flycatchers, Green Honeycreepers, Blue Dacnis, Pallid Spinetail, Striated Softtail, White-bearded Manakin (again a bloody female), Black-capped Becard, a lifer with a Greyish Mourner, Plain Xenops and Sepia-capped Flycatcher. As good as Ciro is even he commented that sometimes birdwaves such as this isn't the best birding, too many, not enough time, try to get on the right bird...... its difficult, even though its mightily exciting for a visiting birdwatcher. I think the flock consisted of  about 12 species. Not part of the flock but in the same area we had Lesser Woodcreeper, Red-stained Woodpecker a lifer, Ruddy-quail Dove that kept giving views as we tracked it down the road, at last a male Blue Manakin and a family of Bahia Spinetails and a Lemon-throated Greenlet. At this point Ciro was stopped in his tracks as he was surprised to hear and see a Red-billed Sythbill. This form was new for the reserve and is from a group that has an extremely small distribution and is a probable future split. A little further on Jeff and Ciro managed to see a perched Mantled Hawk, it flew before I had caught up. Ciro had an Idea that we should go back to the telecom tower as there would be a good raptor viewing point, the plan worked as we got onto a Mantled Hawk in flight. We added great views of a Spixs Spinetail 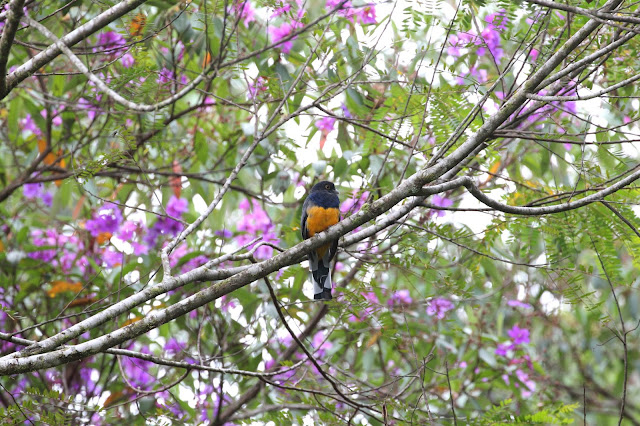 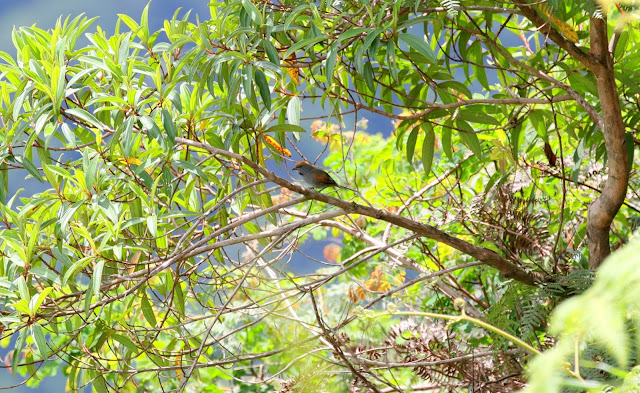 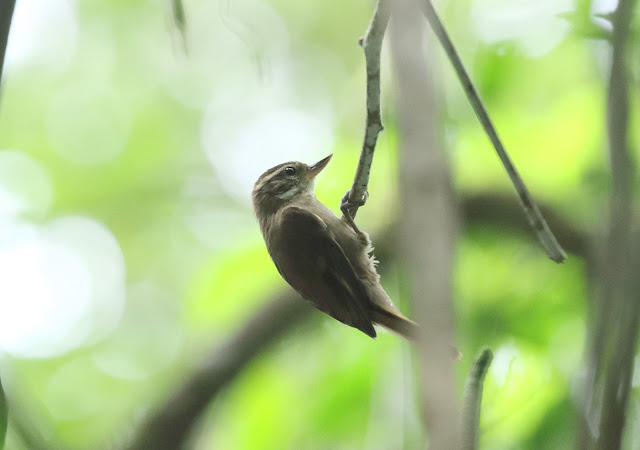 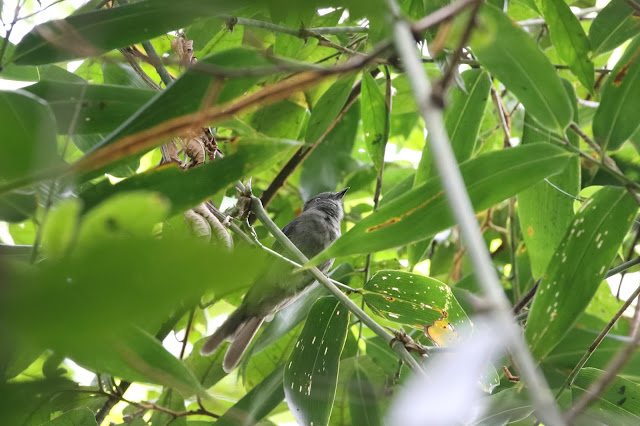 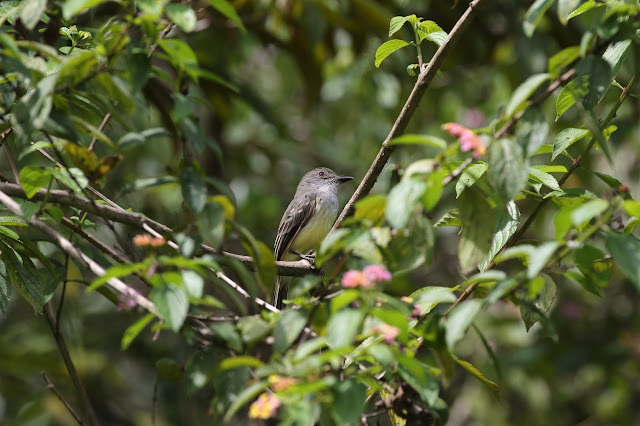 Back at the  research centre we had lunch and enjoyed the veranda feeders again, new for the day were the Cliff flycatchers that nest in and around the roof and at last we got our first sighting of King Vultures fling over head. At least four but probably six flew over in a five minute spell. 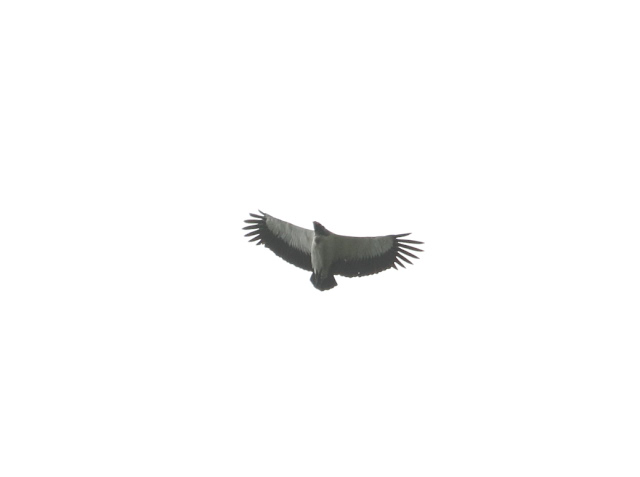 
﻿
We retired to the lodge for an early afternoon break where a Hook-billed Hermit flew onto the balcony, Ciro heard one outside the accommodation block but it didn't show, just to be safe and to ensure I definitely got the lifer we did manage to see one in the flesh this afternoon. This afternoons would only have a couple of targets, apart from the Hook-billed Hermit, we would need, Variegated Antpitta and Spot-billed Toucanet. We didn't do too bad although the birding slowed down greatly, but we added a lifer with a Rough-legged Tyrannulet, and now managed super views of the very smart Sharpbill as well as a Salvadoris Antwren. Jeff found a tree that held upro five Spot-billed Toucanets, while Ciro heard the last target bird calling. 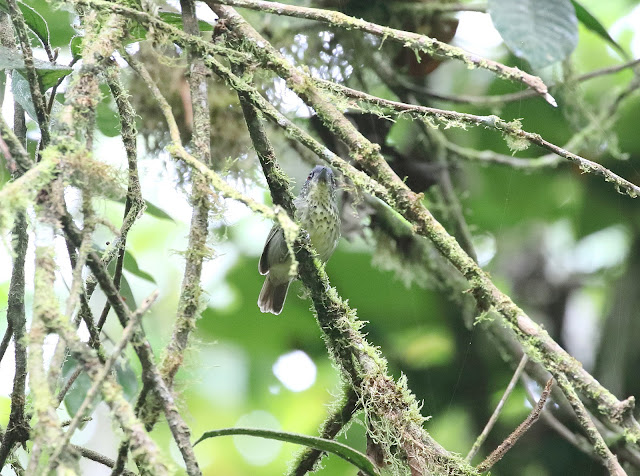 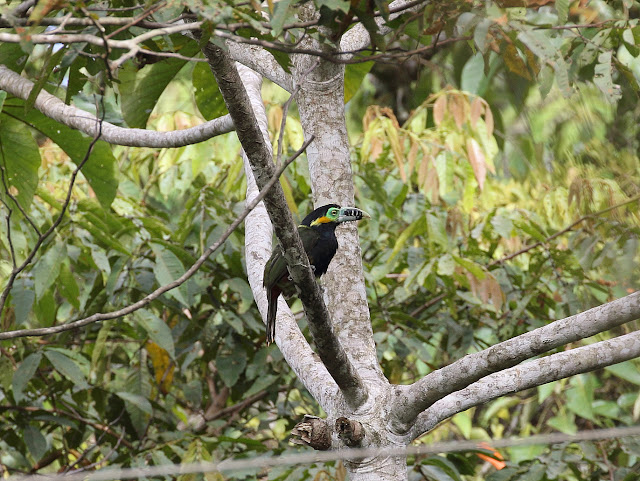 We tracked the Variegated Antpitta over a few hundred yards often it back tracked in the direction that we had already walked, At last we got onto it as we looked down into a shallow valley as it came fleetingly out into the open a few times, just at the wrong moment as we could have tracked in further, a large family of Wieds Black ear-Marmoset came through the canopy, the bird was gone. We added a Gray Elaenia before heading for a beer on the veranda and to watch the feeders before sundown. We now managed to pick out the Azure-shouldered Tanager from the Sayaca Tanagers. The Maroon-bellied Parakeets and a Sombre Hummingbird kept us company before the sun left us. 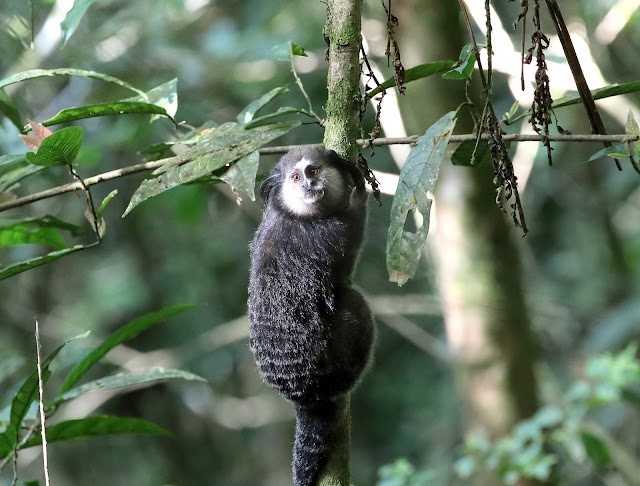 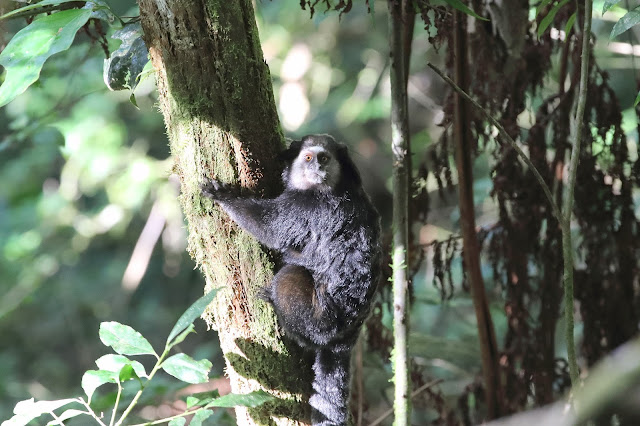 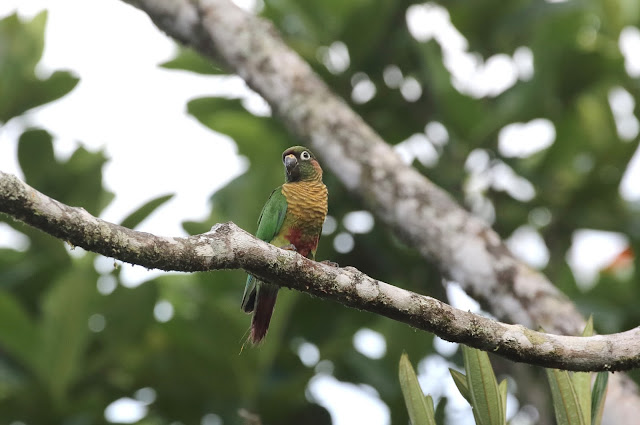 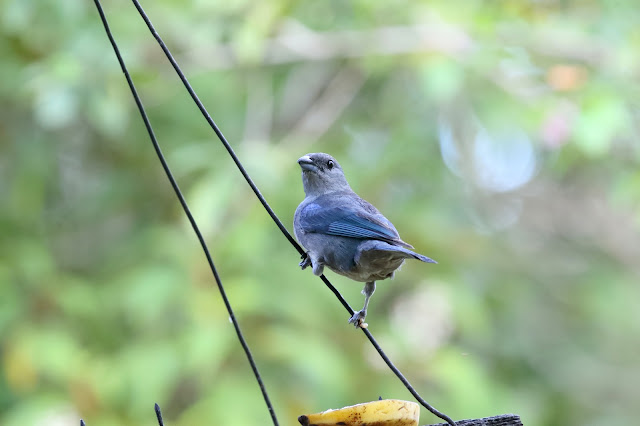 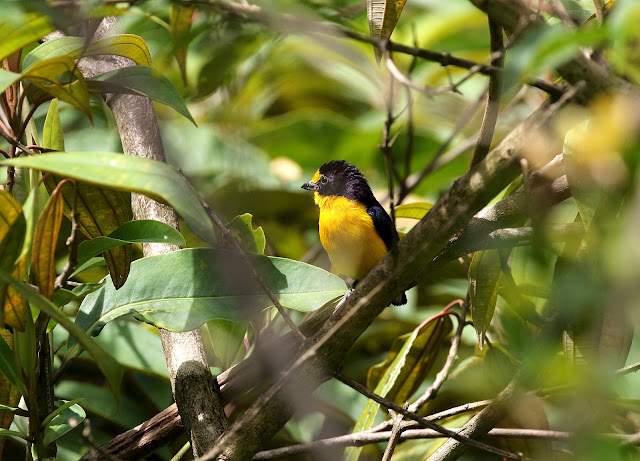 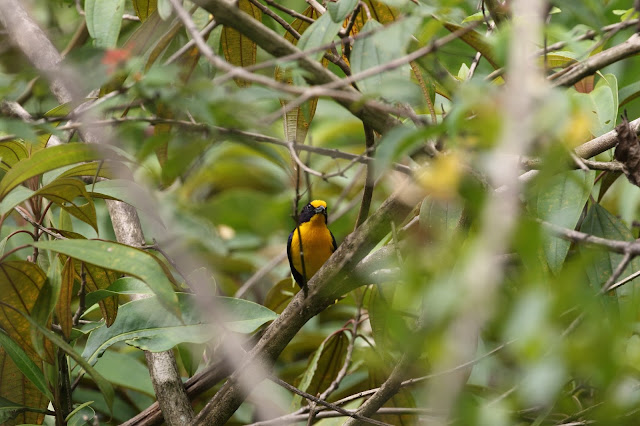 This evening we spent time in the research centre with Vitor looking at his incredible and vast moth collection (over 300,000) that he has collected from across the continent. He also showed us the currently undescribed species that he is just about to describe and name.

It had been an epic days birding in a stunning reserve, with fabulous hosts, tomorrow we have a short time to bird the lowlands of Serra Bonita before travelling to Porto Seguro

A gorgeous series of birds, Dave! So many lovely coloured ones.